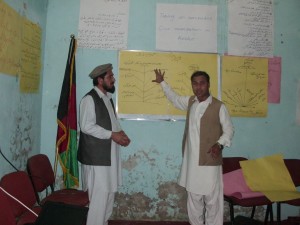 On the first day of a recent nonviolence training for a mix of scholars, students, journalists, and religious and tribal leaders in Afghanistan’s Kunar province, I asked what they knew about nonviolent civic mobilization. A number of them responded “women’s rights,” while some said “democracy,” and others “pacifying people.” They were all familiar with the term “nonviolence” and Khan Abdul Ghaffar Khan — also known as “Badshah Khan” and the “Frontier Gandhi” — whose nonviolent Khudai Khidmatgar (“Servants of God”) movement against the British Raj is well known in Afghanistan. But participants had no real knowledge of the details of this movement, nor of the underlying ideas or practical implementation of nonviolent action.

Most participants had never felt the need to study Badshah Khan’s works and philosophy before because they only knew of violent means to address and react to problems faced by their communities: either fight and join the insurgency, or sit silently as passive spectators. In fact, the majority of Afghans believe that as ordinary civilians, it is not in their power to create change. Many only wish to focus on the present and not on the future. This mindset is the result of three decades of violent conflict, which has affected every single family in Afghanistan.

But as the events in the Middle East unfolded during the Arab Spring, Afghan intellectuals and youth groups came to recognize the potential force of nonviolent civic mobilization. They have since begun to adopt these strategies and tactics to organize and tackle widespread government corruption, which particularly affects the justice system and fosters rampant unemployment and insecurity.

With this process still being in its infancy, proponents of nonviolent action are facing many challenges. Due to insufficient knowledge, demonstrations start out peacefully, but most quickly turn violent as they are easily hijacked by violent insurgents. During demonstrations in Mazar Sharif on April 1, 2011, five international U.N. personnel were killed as demonstrators stormed the regional office of the United Nations Assistance Mission for Afghanistan (UNAMA). In the summer of 2011, gatherings in the cities of Mazar and Kandahar turned violent and claimed several lives as well.

Additionally, participants in nonviolent protests often receive threats, both from violent insurgents (who believe that nonviolent civic mobilization prevents the population from waging jihad against the government) and from corrupt government officials (who fear that such campaigns will threaten their authority in the future). Furthermore, Afghan security forces rarely respect the right to peaceful protest and freedom of expression. Many believe that demonstrations, even nonviolent ones, are against Afghanistan and the interests of Afghans — so they deal with protests and gatherings with an iron fist. In the future, it will therefore be important to include members of the security forces in trainings on civic nonviolent mobilization, so that they too have a better understanding of the demands made and the methods used by civic organizers. In some cases security forces may constitute important allies.

As for the women of Afghanistan, they strongly believe that they can play the same central role the women in Tunisia, Egypt and other countries of the Arab world played, and are still playing, at the heart of the Arab Spring movements. Women represent over half of Afghanistan’s population and are an important pillar in the family, yet their role in the country’s political, cultural and economic life was ignored and suppressed for almost two decades. Torpikai Rasoli, a member of the Kunar Provincial Council and participant in the nonviolent civic mobilization in the Kunar training said: “We, women, have the potential to bring changes in our society.”

Since the collapse of the Taliban regime in 2001, women are increasingly taking on important roles, such as voting and running for the parliament, presidency and other important offices. Although they are now represented in most sectors, including business and media, they still face a number of important issues and challenges, which vary between provinces. For example, security conditions and fear of repercussions deterred female participants from joining the workshop in Kunduz, while nine women were able to attend the one in Kunar.

Although these were not the first workshops on nonviolent civic mobilization that were held in Afghanistan, the local and national media gave greater attention to the trainings this time. In their interviews, participants spoke of the Arab Spring, Gandhi’s salt march, Otpor in Serbia and the use of nonviolence by Badshah Khan as they outlined their own vision for Afghanistan’s future and how it could be achieved. 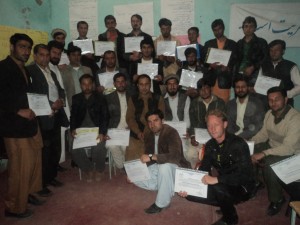 While some participants, fearing for their safety — especially the tribal chiefs and religious scholars — did not want to be photographed during the trainings, the younger participants were eager to speak with the media. This was significant, as it sent an important message to the community that there are citizens who are ready to speak up and take bold steps.

In addition to fearing for their safety, those teaching about nonviolent civic mobilization must combat the persistent perception that this way of struggle is weak. Most Afghans associate strategic nonviolent action with foreign cultures — even though Afghanistan has a rich history of nonviolent movements. Trainers must be sensitive to the cultural and social environment and contextualize their curricula accordingly, reassuring participants that the philosophy of nonviolence is consistent with Islam and Afghan culture.

As the trainings came to a close, the experience strengthened my belief that Afghans throughout the country are seeking alternatives to address their problems and express their grievances. The workshops were conducted in two parts of the country under very different conditions. However, participants responded with equal interest and enthusiasm to this unique opportunity to learn about a new way — consistent with their beliefs and culture — for mobilizing and demanding their political, social and economic rights.

This article was co-authored by Nicola Barrach.

Ahmadullah Archiwal is president of the Organization for Social, Cultural, Awareness, and Rehabilitation (OSCAR) and is pioneer of trainings on nonviolent civic mobilization in Afghanistan.

Training sows the seeds of nonviolent civil resistance in Afghanistan

Climate activists can still win even if they lose on KXL

Mass mobilization stopped nuclear war before and it can again

Ambazonians struggle for independence from Cameroon amid military takeover