Even now I recall how strange it sounded. In the midst of a sleepy academic conference exploring the minutia of environmentalism, one of the speakers presented an elaborate evaluation of the nation’s comprehensive recycling program and the way it was changing our society. Despite the report’s deadpan wonkishness, the audience found itself snapping to attention and barraging the author with questions: When did this get established? How long has this been going? Can you remind us how this program got passed?

And a few even asked, “What’s recycling?”

These reactions seem peculiar today. But they were not surprising in the late 1970s, when this meeting occurred. For most people then, “recycling” was still a vague, utopian concept that surely would never catch on. No citywide recycling program seemed to have existed anywhere in the nation at that time, and the prospect that such a concept would reach into every part of our society seemed far-fetched.

We were right to be confused, but we were also abruptly compelled to think in a new way. The presenter got our attention by painting a detailed and plausible picture of what U.S. society would look like if a widespread recycling program were in place. Even for those of us who had never heard the word “recycling” before, we came away with a new appreciation for the challenges facing our planet — but also one of the tools we could use to deal with them. It was up to us to take this whimsical fantasy (the transformed future calling out the clueless present, all dressed up strategically in the turgid polysyllabic Latinates and statistical excesses of an academic paper) and make it real.

Today, recycling seems way down the list of urgent environmental action. (Of course, much work still needs to be done in this area. It was, for example, a shock some years ago to move from Washington State, where recycling is an institutionalized way of life, to Chicago, where it is, to put it charitably, woefully underdeveloped.) But one of the reasons recycling is not at the forefront of concern is precisely because it has been more or less mainstreamed over the past three decades. This took enormous action and organizing, just as today’s more monumental and comprehensive strategies for global eco-justice will. But they will also need a fleshed out vision, like the one several of us received on recycling 30 years ago. 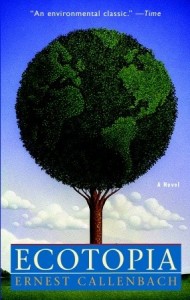 The presenter from that long-ago afternoon seems to have taken a page from Ernest Callenbach’s book — specifically, from his visionary 1975 novel, Ecotopia.  When I learned that Callenbach died last month at the age of 83, it got me thinking about his contribution to the great, unfolding movement for ecological sustainability and, more generally, about the importance of three-dimensional dramatizations that spell out what a transformed society might look like. This is what Ecotopia set out to do.

The originally self-published bestseller (rejected by many publishing companies, one of whom said that the environmental movement was a passing fad) describes the nation of Ecotopia, which broke away from the United States in 1980 and is comprised of the bioregion that includes Washington, Oregon and Northern California. It has created an ecologically sustainable society, including decentralized and renewable energy, green architecture, universal health care and a selective use of technology (including videoconferencing as well as electric cars and magnetic-levitation trains). Some of the environmental tactics Callenbach spelled out have now become commonplace, including locally grown organic food, bicycle sharing programs and recycling.

In learning of Callenbach’s death, Worldwatch Institute’s Erik Assadourian wrote that this novel

is about a nation following a different path of development — one that puts sustainability, sanity and a joyful way of life first and foremost. Ecotopia, as Callenbach’s narrator notes, is a country that “poses a nagging challenge to the underlying national philosophy of America: ever continuing progress, the fruits of industrialization for all, a rising Gross National Product.”

Callenbach was a longtime editor at the University of California Press where, among other duties, he edited Film Quarterly and Natural History Guides. When he came to write Ecotopia, he integrated a wide range of sources and trends being explored and named at the time. The novel, however, not only reflects the ideas emerging in the 1970s about a green society, it also carries within it the deeper assumptions and attitudes of the dominant culture of its time.

For example, in seeking to uphold racial and ethnic diversity in a utopian context the novel comes down on the side of voluntary separatism (even as it questions this “solution” in its chapter entitled “Race in Ecotopia: Apartheid or Equality?”). Its approach to gender is also problematic, as one blogger has stressed. I am left wondering if it is possible to envision a utopia from only one cultural perspective, especially from the dominant cultural perch (white, male, middle class), or if such projects should be taken up by a community or a network or an emerging society? As the above blogger puts it:

It’s a fascinating thought experiment, to imagine a nation with such different principles but the same basic roots, and I’m always ready to give time to someone imagining a better way for us to live sustainably and ethically. Ecotopia should keep being read, and widely. It’s a cool book, with lots of valuable ideas, but wow, does it ever need updating.

Updating, indeed. We have been through a hundred eons since 1975, with challenges and learnings that will certainly enrich, and complicate, any new three-dimensional parable of what is possible. (Spanning those eons has been a new activation of nonviolent people power, which will be key, I suspect, to any such visualization.)

Perhaps this new, visionary novel — about a society that works for all of us — has been written. If so, I look forward to reading it. If not, I’m wondering if there is an individual, group, or community who is willing to put dramatic flesh on the vision and infrastructure of such a society?

Maybe there are some clues for such a project from Callenbach himself. After his death, a last missive to all of us was found on his computer. In this letter, written nearly 40 years after penning Ecotopia, he invites us to move forward toward sustainability by investing deeply in hope, mutual support, practical skills, organizing and learning to live with contradictions.

Anyone game to write Ecotopia 2.0?

Making our movements work for kids and families