Mexico’s ongoing Yo Soy 132 movement continues to show a capacity for creativity and joy while opening new spaces for political participation. A case in point: On June 19, Yo Soy 132 organized a debate among the Mexican presidential candidates, this time with the movement’s own media, rules and questions.

Three of the four candidates took part in the debate: Josefina Vázquez Mota of the National Action Party (PAN), Andrés Manuel López Obrador of the Democratic Revolution Party (PRD) and Gabriel Quadri, of the New Alliance Party. Enrique Peña Nieto, from the Institutional Revolutionary Party (PRI), was the only candidate not to accept the invitation. His absence throughout the two-hour debate was reflected by an empty chair facing the audience.

“Welcome to this historic day,” the presenter announced at the beginning of the debate. And the truth is that this really was an unprecedented moment in Mexico’s democratic history. The debate marked a new form of political expression and of public dialogue. It initiated a new way of conceiving of the media and of communication outside of corporate rule. 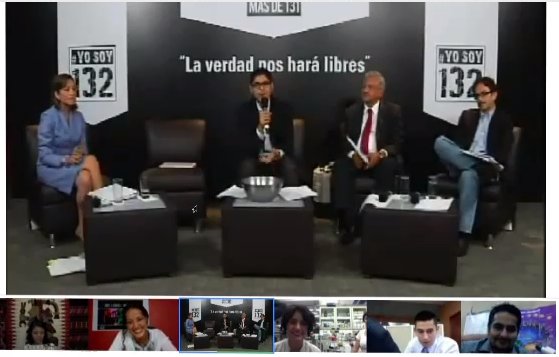 The movement broadcast the debate online through its own media — live on YouTube through an agreement with Google — so that it could be rebroadcast all over the world by other media, commercial or otherwise. At the beginning of the debate, more than 90,000 people came online to watch. According to Rodrigo Serrano, one of the organizers, “112,000 people watched the online stream.” In spite of transmission difficulties due to the high volume of hits on YouTube, they delivered what was promised.

Others who were unable to access the streaming version opted to listen over the radio. The debate was also projected in public plazas throughout the country. This was done not only at a number of locations in Mexico City but in other cities and states, from Chihuahua to Yucatán.

At the end of the debate, the organizers gave the candidates a folder of questions that arrived through social networks and various Yo Soy 132 assemblies. In spite of Peña Nieto’s absence, they will also send him a folder with 15,000 questions.

In organizing this exercise, it is evident that, for Yo Soy 132, fostering authentic democracy means engaging people in more ways and more places: in the streets and plazas, at home or over Twitter. In contrast to the last two “official” presidential debates, this time issues that have been ignored by the candidates were put on the table, such as the fulfillment of the San Andrés Accords with indigenous peoples, and the democratization of the media and telecommunications.

The candidates present also saw the value of this exercise in democracy. López Obrador called it a “call to conscience” and referred to the debate as “authentic, clean, creative and independent, contributing to the rebirth of our country.” Josefina Vázquez Mota said:

What brings us together tonight is Mexico, with the goal of building a better country, with more justice and more opportunities. I come with the certainty that you [Yo Soy 132] have sparked the light of democracy.

Gabriel Quadri added: “It is a valiant initiative, for a country that is in need of ideas, in need of vision.” The 132 Debate is now available online in its entirety, and has been viewed more than 1.3 million times.

Creativity as a nonviolent organizing strategy 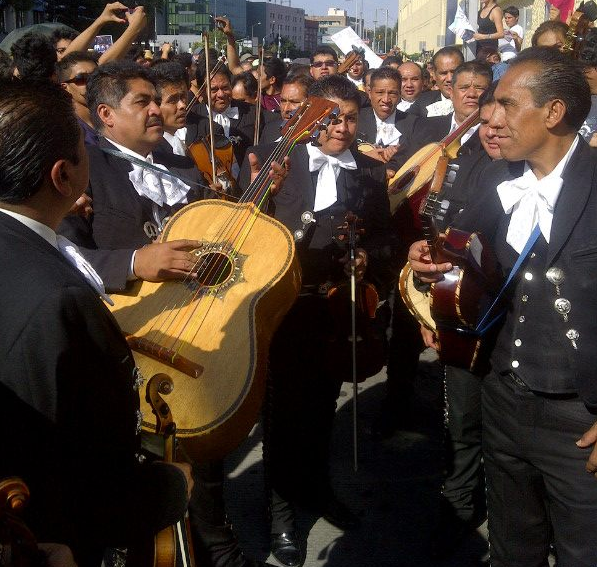 Yo Soy 132 is equally creative and joyful in the streets. The movement’s spirit was on display during its march on June 10, in which theater groups and singers joined with the famous jarana players who play the music of the Huasteca regions. All of this mixed with the sounds of a mariachi group singing “Las Golondrinas” — a song always linked to last goodbyes — in front of the Televisa Chapultepec offices in Mexico City. The goodbye song was dedicated to the ex-governor of the state of Mexico, Enrique Peña Nieto, and the TV station itself.

Less joyful but also very poignant, was a group of youth participating in a funeral march to symbolize the more than 60,000 killed during the “war on drugs” initiated by current Mexican president Felipe Calderón.

On the night of June 13, people projected images onto the walls of the Televisa station in Mexico City about chapters of Mexico’s history that Televisa has distorted and misled the public on, such as the slaughter of 45 Tzotzil in Acteal, Chiapas, in 1997, the massacres of students in 1968 and 1971, the rape of 23 women and the killing of two men in San Salvador Atenco in 2006, the 1988 electoral fraud, and the 17 campesinos killed in Aguas Blancas in 1994. The slogans chanted that night were: “Turn off the TV, turn on the truth,” “Wake up and demands the truth peacefully,” and “Televisa does not decide for you.”

The walls spoke, recuperating historic memory, as the viewers lit candles or turned on items that gave off light. Three days later, the first Yo Soy 132 concert brought together more than 50,000 people in Mexico City’s Zócalo over the course of nearly 8 hours. 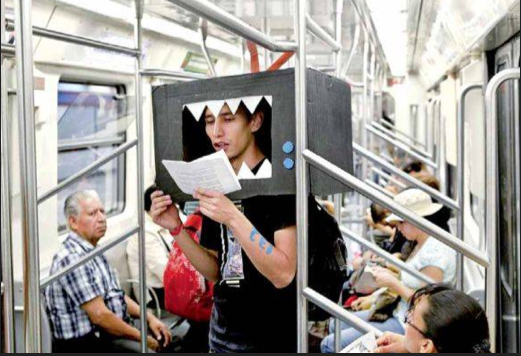 Yo Soy 132’s creativity is also reflected in the way its members interact with the general public. In their Metro system outreach efforts in Mexico City, movement participants have been wearing television-shaped masks on their heads giving out paper and pencils to riders, collecting suggestions and complaints for the political candidates, the mainstream media and even Yo Soy 132 itself. The papers are then read on the train car, and participants are informed that their suggestions would be used in a traveling display and at the next anti-Peña Nieto march.

Beyond these “outreach brigades,” members of Yo Soy 132 have begun to change the names of certain Metro stations in Mexico City. For example, the Child Heroes station is now named “Yo Soy 132,” and the Panteones station has a sticker with the word “full” over it — to symbolize that the cemeteries where the dead are buried are already full.

The Yo Soy 132 art and culture group also invited people to draw silhouettes on the floor of the Zócalo before the march last Sunday with the goal of calling attention to the dead from the drug war.

Creative actions like these give visibility to the movement and spread online through tweets, videos and photos. They enable people of all ages to learn about and participate in it, thereby bringing new energy and life to Mexican politics.

There is less than one week left before Mexico chooses its next president. The 132 youth have been agitating around the presidential campaigns with a busy calendar of events and actions. They are demanding clean and free elections in a country accustomed to electoral fraud and a corrupt media.

Last Saturday, Yo Soy 132 held its second music festival, which brought 80,000 people out to the Zócalo in Mexico City. The following day, while Peña Nieto closed out his campaign at Stadium Azteca, Yo Soy 132 undertook its third wave of anti-Peña Nieto marches in Mexico City and other parts of the country. It was a massive expression of popular indignation. “I didn’t come for my sandwich, I came for my eggs [balls]” was one of the slogans, alluding to the sandwiches that the PRI was handing out in Stadium Azteca.

With four days to go before the elections, the Yo Soy 132 movement has a physical space within Mexico City, which was announced publicly at the end of the music festival and on all of the social networks. Participants have camped out in front of the Monument to the Revolution, where activities are being organized to achieve more efficient dialogue with the public and improve teamwork. The organizers said their goal is to act as a base of operations, organizing projects and “informative brigades,” and to act as a media and electoral watchdog before and during the elections. By camping publicly, they want to make visible the work processes of the movement, ramp up their efforts towards media transparency, and with their actions, demand a more democratic process during the elections. There are two concrete goals: transparency in the elections and making sure the media is telling the truth. The encampment’s Twitter hashtag is #AcampadaRevolución, or Camping Revolution.

For the first time, a true electoral monitoring group has been proposed for all of Mexico and its electoral colleges to prevent fraud. The Yo Soy 132 students ratified a national march for democracy, to take place on June 30, which would leave from the Tlatelolco Plaza (the site of the student massacre of ’68) to the Televisa Chapultepec offices, and from there to the Zócalo, where the marchers will light thousands of candles. Yet again, the movement is poised to transform youthful anger and indignation into an explosion of collective creativity.

Is social justice driven by emotion or reason?