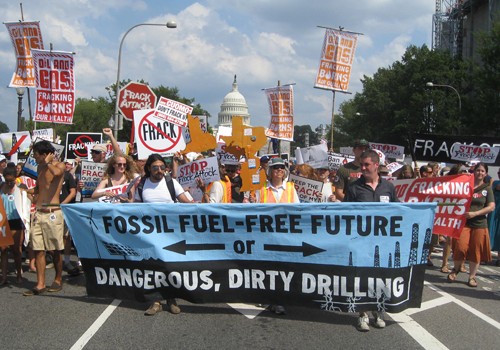 The war came home this weekend, as thousands of people whose land has been under siege by the U.S. government and corporate interests gathered in Washington, D.C. No, they weren’t victims of drone attacks or 10-plus years of fighting in Afghanistan. They were ordinary Americans, whose neighborhoods, townships and states have been struggling to put an end to fracking, a destructive form of natural gas drilling.

These veterans of the frack war were in Washington for a national convergence called Stop the Frack Attack. Over the course of two days, they held teach-ins and strategy sessions on ways to bring relief to their communities through collective action, before ending on Saturday with the first ever national march and rally against fracking. Many hailed the event as an important step to building a broad, grassroots movement to ban the drilling practice.

“I’m going to dream big,” said Jennie Scheibach with NonToxic Ohio, a group fighting the spread of fracking in northern Ohio and the disposal of fracking waste in the state’s rivers. “Standing together, rising up together, we can stop this.”

Jennie wasn’t alone. Thousands of people from across the country, from voluminous backgrounds, joined in common cause in D.C. over the weekend, raising the call for an end to fracking.

Lori New Breast of the Blackfoot Nation, whose homeland encompasses parts of Montana, Alberta, and Saskatchewan, took part in the rally. She said her community is mobilizing to reject fracking. “Oil companies would like you to think that that land is unoccupied and that we are gone. But as the care takers of the headwaters of the continent, we are still here. We do not want fracking. It is a threat to our cultural way of life.”

Members of Occupy Wall Street Environmental Solidarity were also on hand in D.C. as well, carrying banners that read, “Safe Fracking is a Lie; Occupy! Resist!” and “Frack Wall Street, Not Our Water!”

Meanwhile, suburban mothers like Vicky Bastidas, who brought her three teenage daughters to the rally, were present. She and her family have been fighting frackers from drilling near schools and playgrounds in their home town of Bethlehem, Pennsylvania. Vicky said she was heartened by a recent court decision that overturned a law barring local municipalities from banning fracking and now looks forward to passing a ban in her town.

The decision might have come too late to reverse much of the long-term damage that the unimpeded invasion of drilling has done to Pennsylvania, but nonetheless it grants Pennsylvanians a chance to set up legal barricades against the fracking bombardment. Bastidas had a message from her family to Governor Corbett and lawmakers like him: “Our water is not for sale. We can live without oil. We can live without gas. But we cannot live without water.”

This was a widespread sentiment among the approximately 4,000 demonstrators who marched from the Capitol building to the headquarters of the American Petroleum Institute (API), the oil and gas industry’s lobbying arm. Along the way they made a brief stop at the home base of the American Natural Gas Alliance (ANGA), where Delaware Riverkeeper Maya Van Rossum held up a murky, brown libation of chemical diarrhea in a clear plastic jug.

“This is frack water,” she said. “We don’t want it in our communities. We can’t drink it safely. We’re giving it back to the drillers. I bet they won’t drink it!” Uniformed in hazmat suits, Van Rossum and several of her colleagues with Delaware Riverkeeper chanted “shame” and pounded on ANGA’s doors, but a representative of the Alliance failed to appear for a taste test.

Next, demonstrators flooded the courtyard of API’s home office. “The water, the water, the water is on fire,” they hollered in unison, “We don’t need no fracking let the corporations burn.” Members of the crowd set down a 10-foot replica of a fracking rig made of bamboo and canvas at API’s door and tipped it over. The move was a symbolic representation of what they hope the burgeoning movement against fracking can accomplish nationally.

The action also pointed toward another tipping point, that of the climate, which has been driven to the brink of near collapse by the fossil fuel industry with the support of politicians, including President Barack Obama, who received $884,000 in campaign donations from the oil and gas industry in 2008. Given such a payout, it should not be surprising that Obama signed a little-noticed executive order earlier this year establishing an intergovernmental task force for the support of “unconventional” gas drilling — in other words fracking.

With the stroke of a pen, Obama picked a side in a war that began under his predecessor’s administration. In 2005, lawmakers on Capitol Hill approved the Energy Policy Act, a bill championed by then-Vice President and former Halliburton executive Dick Cheney that exempted frackers from the Safe Drinking Water Act (SDWA) and the Clean Water Act (CWA). The fracking amendments gave the world’s wealthiest energy corporations license to invade some of America’s poorest counties, poison their drinking water, foul their air and putrefy their soil. For each frack site, and there are now tens of thousands across America, drillers pump millions of gallons of water, sand and toxic chemicals into the land in order to draw oil and gas from shale rock.

Since the frack boom began, impoverished, cloistered communities sitting on millions of dollars worth of shale gas — from Pennsylvania to Wyoming, from indigenous tribal lands in Montana to the Texas border — have become ground zeros for fracking. In most cases, they are offered a short-term cash prize for land rights or desperately needed jobs in return for long-term ecological devastation. Such a strategy for prosperity, critics contend, would have left mountaintop removal strongholds in Appalachia looking like Beverly Hills long ago.

Instead, it seems the only pockets being lined are those of the corporate executives and politicians. In 2010, the fracking industry raked in $76 billion in revenues. Meanwhile, the Obama 2012 campaign is set to bring in more from oil and gas lobbyists than was raised in the previous election. If there’s hope in matching corporate campaign donations, though, it’s not with money, but rather a national movement, comprised of the diverse voices of dissent that marched through Washington on Saturday.

Germans march in Munich against G7 talks and trade deal

Climate activists to fossil fuel industry: ‘If you build it, we will come’

Of course there are protests. The state is failing black people.

Immigrants jailed by ICE are winning court battles to get free

COVID-19 sparks a rebirth of the local farm movement

The spontaneous rebellion of low-wage workers exposed to Covid-19