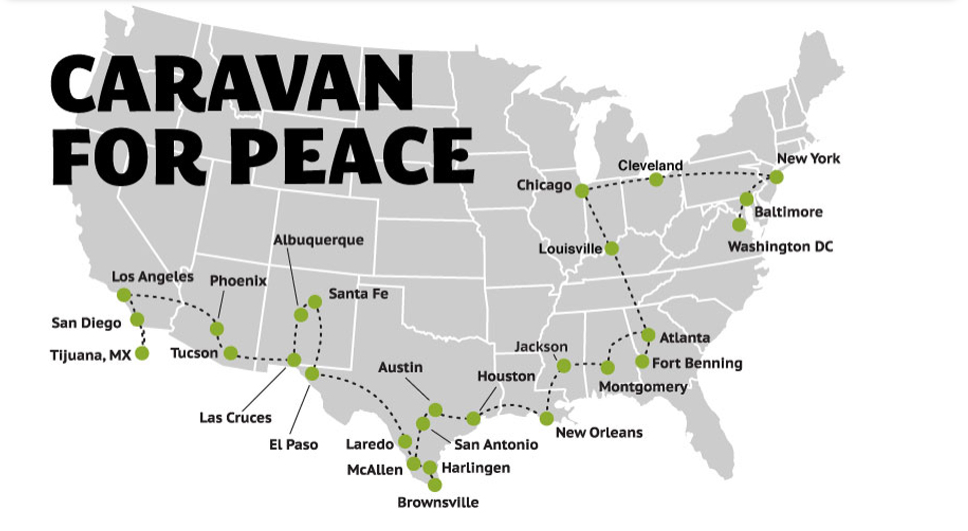 In spite of the environment of agitation and mobilization in post-electoral Mexico, and a presidential campaign season in full swing in the United States, members of Mexico’s Movement for Peace With Justice and Dignity (MPJD) will begin a Caravan for Peace across the United States on August 12. On their route, they will pass through more than 25 cities in just one month to demand change in the violent drug policy that has been imposed by their neighbors to the north.

Tijuana, San Diego and Los Angeles will be the first three cities to receive the caravan. They will pass through Texas, the South, Chicago and the northeastern United States, including New York and Baltimore. The last stop will be Washington, D.C., where they will be from September 10 to September 12. This will be the third caravan organized by the MPJD, Mexico’s largest movement against the War on Drugs, inspired just over a year ago by the poet Javier Sicilia. Through his anguished response to the assassination of his son Juanelo, he brought together victims of the drug war.

The first caravan, called the Caravan of Solace, left on June 4, 2011, and ran from Cuernavaca, Morelos, to Ciudad Juarez, Chihuahua, then crossed the northern border to conclude in El Paso, Texas. Over the course of 10 days, it united victims of the drug war, who began to turn their pain into organizing, while showing the world that they were not simply statistics or collateral damage. Rather, they were Mexicans seeking dignity.

Those were the first steps taken by members of the MPJD. During their first dialogue with Mexican President Felipe Calderón on June 23, 2011, they demanded justice for the victims of violence and a halt to the War on Drugs. Afterward, they organized a second caravan in September 2011. This caravan, called the Caravan of Peace, passed through Puebla, Veracruz, Oaxaca and Chiapas before reaching Mexico’s southern border with Guatemala. With those two caravans in 2011, the movement managed to bring together victims of the War on Drugs — and of the structural violence found throughout the country — as well as organizations and social movements in the north and south.

In doing, it reinforced alliances with those who already had long organizing histories, such as with Las Abejas de Acteal, in Los Altos de Chenalhó, Chiapas, whose members shared lessons from their long history of nonviolent struggle, beginning in 1997 with the massacre of 45 indigenous tzotziles. Representatives from indigenous communities in Chiapas, from the Consejo de Pueblos, or Council of Villages, in Morelos, and members of the Wixárica (Huichol) community, among others, will be accompanying the caravan to the United States.

After a year of working and learning, the MPJD continues improving its strategies and strengthening its national and international networks of support. Organizers decided to embark on the Caravan for Peace in order to unite and draw attention to victims of violence on the northern side of the border — migrants forced to flee their homes by violence or economic need, those who are threatened for defending human rights or those left unprotected by Mexico’s failed state.

Many who have been affected by the War on Drugs are no longer afraid. They have realized that they are no longer alone and continue to work to strengthen their organization. They are no longer fighting to find their parents or children, or to seek justice for their loved ones, but instead they are fighting for all parents and children of the disappeared.

Those who will make their voices heard include Teresa Carmona, whose son Joaquín was killed at the age of 21; Olga Reyes Salazar, whose nephew and four brothers and sisters were assassinated; Araceli Rodríguez, whose son Luis Ángel is a federal police officer who disappeared in November 2009; Melchor Flores, with his giant “galactic cowboy” poster, whose son disappeared January 19, 2009, after being taken away by policemen in Monterrey; and Maria Herrera, a mother of four disappeared. Each of them walked alongside Javier Sicilia during the caravans to the north and south of Mexico. Now they will do the same with victims on the other side of the border.

Members of the MPJD will argue that drug prohibition has failed, while exacting a tremendous social cost for Mexico as well as the United States. The movement released this statement on June 18 in Mexico City:

Moreover, in Javier Sicilia’s recent open letter directed toward Mexican president Felipe Calderón, he reaffirms the position he has defended since the movement began:

History demonstrates, with the case of the prohibition and subsequent legalization of alcohol in the United States, that drugs are an issue of public health, of personal liberties, of State market controls. Never an issue of national security.

Sicilia believes that President Obama already knows the U.S. drug policy is a failure, but has done nothing about it. The United States has promoted similar drug policies abroad knowing full well that its own citizens are one of the world’s primary markets for illegal drugs. As caravan participant Olga Reyes wrote: “This isn’t ours, it belongs to those up North. They sell the arms, they launder the money, and we provide the corpses.”

The Zapatista movement has also joined Sicilia’s call. On May 7, Zapatistas marched in silence through the city of San Cristóbal de Las Casas, in Chiapas. Afterward, Subcomandante Marcos stated: “This war has always mainly targeted innocent people, from all social classes, who have nothing to do with drug trafficking or with the government.”

At a press conference in Mexico City on June 18, Sicilia further explained his view of how the violence in Mexico is so closely linked to U.S. security policy, resulting in virtual war zones, human rights violations and the deterioration of the rule of law:

This policy has permitted the existence of a vicious cycle of drugs, illegal arms trafficking and a financial system propped up by money laundering. All of this is possible because of a bilateral policy that feeds war and tramples migrants, indigenous communities, children, women and other vulnerable groups. Violence and death are perpetuated, and our social fabric is broken. And on top of the pain, death and suffering faced by thousands of families, it is a shame that our own governments turn around to criminalize and persecute those who seek justice and dignity.

In recent months, the MPJD has found new support in Mexico’s Yo Soy 132 movement, which spoke out against the mass media and demanded an authentic democracy in the middle of the Mexican campaign season. On August 6, in an effort to unite the social movements in Mexico, Yo Soy 132 declared its support for MPJD with these words:

We now walk together, we have found each other. Two droplets of our struggles that walk in search of peace, justice, and for the dignity of many peoples, for life, will now form a torrent that seeks to heal the wounds of a country that bleeds and for whom we hurt. We walk together in search of a world where we are not omitted, not silenced, where we are not killed. That is our light, in which we burn together, let’s continue walking!

As the caravan crosses the border to promote a message of peace, it insists that the United States, too, has been complicit in the war and its violence. Sicila explains, “We believe that the pains we share are linked by policies that are wrong, and we want them changed.”

The struggle to abolish bail gaining momentum in Massachusetts