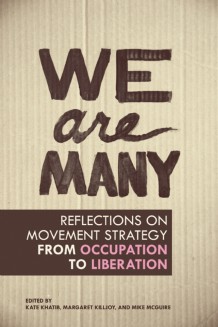 It is fun to see your friends’ names in print — even in the police blotter (depending on the circumstances). But when the name is on the cover of a book, especially on a stylish looking, grab me book with a timely title, even better.

My good friend and fellow Baltimorean Mike McGuire co-edited We Are Many: Reflections on Movement Strategy From Occupation to Liberation published this year by AK Press. There are lots of friends in between the covers too, including Waging Nonviolence editor Nathan Schneider. When I was down in Baltimore recently, I had a chance to reconnect with Mike and talk about his book. Later he took the time to respond to some of my questions. I cribbed some of my questions from the famous Proust Questionnaire on the last page of every issue of Vanity Fair. Mike said he had never read the glossy society tome, but he was a good sport about the questions—and his answers reveal a conscientious, funny, wise and well-rounded individual worthy of a broader hearing or even a VF profile, but until Graydon Carter calls, you can read about him and the book here.

Why did you decide to compile and edit this book? Why these collaborators?

The Occupy movement inspired so many new activists. The first meeting of Occupy Baltimore had over 200 people, and in spite of my decades of organizing in that fairly small town, I knew fewer than 40 of those gathered. That phenomenon was repeated across the country as new people emerged from out of the woodwork to make their voices heard. The intense work of the first few months of the Occupy movement led to many discussions in which I was trying to give a broader context to what we were living in that moment. People were disheartened that the pillars of the old society hadn’t fallen with our first whisper, or that there were too many screaming older white guys ruining the whole movement. I had so many conversations where I tried to describe our experience as the first steps of an infant. When Kate Khatib approached me to work on this book, I saw a new opportunity to intervene. My goals for the book were to give newer activists a broader context for their experiences, and to make room for us reflect on the meaning of what we were doing.

My list of collaborators is more extensive than just my two co-editors, Kate Khatib and Margaret Killjoy. The book has around 50 contributors. Kate, Margaret and I thought about all the thoughtful organizers, activists, thinkers and writers we knew and what they might contribute to the discussion about the Occupy movement — where it comes from, what it is and where it might go. What we came up with was a very impressive list of contributors and a book that flows, that has authors citing each other without ever seeing the manuscript of the other person. Each contributor brings something important, whether it’s Frances Fox Piven and Immanuel Wallerstein sharing their years of research on social movements, or Marisa Holmes and Lisa Fithian reflecting on their lessons as organizers. Regardless of my name being on the cover, this is a book I’ve really enjoyed reading.

How do you hope people use the book?

I started off thinking the book would be more prescriptive, but now I see it much more as a movement reflection or document. One of the contributors, Janaina Stronzake of Brazil’s Landless Workers Movement, notes in her essay the importance of studying, acting and reflecting as a way of deepening our resistance. I think We Are Many fits in that sequence as a moment of reflection for this new movement.

Where is Occupy? Where is it going?

This is a question that a lot of people within the movement are struggling with. I think there are very few Occupy groups that are thriving. The most dynamic of the Occupy groups continues to be Occupy Wall Street, but that doesn’t mean that the rest of us have disappeared. In Baltimore and elsewhere, there are still people that organize under the Occupy name, but there are also many groups that emerged from within Occupy that are still connected to each other but no longer use the “Occupy” name. We are still in a moment of very intense struggle, and neither we nor the issues that move us are going anywhere.

Frances Fox Piven and Immanuel Wallerstein both make very important contributions to the book in how they look at social movements. Fox Piven asks the question “Is Occupy over?” and concludes that Occupy is more likely a movement that will define this generation as one of the United States’ great social movements. Here I’m not talking about Occupy as the fall of 2011, but instead a longer trajectory that will unfold over the coming decade. Wallerstein takes a very similar perspective, describing the “geography of world protest” and how this historic moment is another irrepressible global wave of protest.

Does it mean anything in the Romney/Obama contest?

Occupy has already meant a lot in the rhetoric of this presidential contest. It was incredibly odd to see Republican candidates stealing talking points from Occupy in 2011. That said, it’s clear that both Romney and Obama are ideologically on the other end of the spectrum from any left populist movement. So yes, Occupy does mean something in the contest, but its main meaning is beyond and outside of the contest. The only way for a democracy to live up to its name is for there to be a mobilized population that is capable of defining and defending its own interests. The Occupy movement has been a taste of that, but we’ve got a ways to go.

Okay, here begin the Vanity Fair questions. What is your idea of perfect happiness?

This is unusual for me, but I’ll quote Marx … oops, I can’t find the quote. Read the “Economic and Philosophic Manuscripts of 1844.” When you get to the part about being a shepherd in the morning, a critic in the afternoon and something else in the evening, let me know.

What is your greatest fear?

That the bad guys will keep on winning.

Which living person do you most admire?

What is your favorite journey?

Train rides in the Argentine Pampas, anything involving high plains.

What do you consider the most overrated virtue?

On what occasion do you lie?

What do you dislike most about your appearance?

All the small scars on my knuckles from construction and fighting.

Which words or phrases do you most overuse?

What is your greatest regret?

Not paying attention in math classes as a kid.

What or who is the greatest love of your life?

When and where were you happiest?

Hard to say. I’ve had a pretty happy life, but I’ve been especially happy lately while walking the streets of Baltimore. Probably here and now.

I’d love to be able to slam dunk a basketball on a regulation rim, during a game, and not hurt myself.

What is your current state of mind?

If you could change one thing about yourself, what would it be?

If you could change one thing about your family, what would it be?

My mom would be healthy.

What do you consider your greatest achievement?

Installing the heating system in my house … total elation when it actually worked after months of thinking about how to do it.

If you were to die and come back as a person or thing, what do you think it would be?

Future or past? I’ve always admired Diogenes the Dog.

If you could choose what to come back as, what would it be?

Are you sure there will be something worth coming back to?

What is your most treasured possession?

An old pair of Klein linesman’s pliers that has Chicago stamped on them.

What do you regard as the lowest depth of misery?

What is your most marked characteristic?

A tremendous ability to make an ass of myself then apologize incessantly.

What do you most value in your friends?

Who are your heroes in real life?

Too many to name, happily.

What are your favorite names?

What is it that you most dislike?

The arrogance of wealth.

What is your motto?

If you’re going to be a bear, be a grizzly.

‘We are many’ — a conversation with Mike McGuire