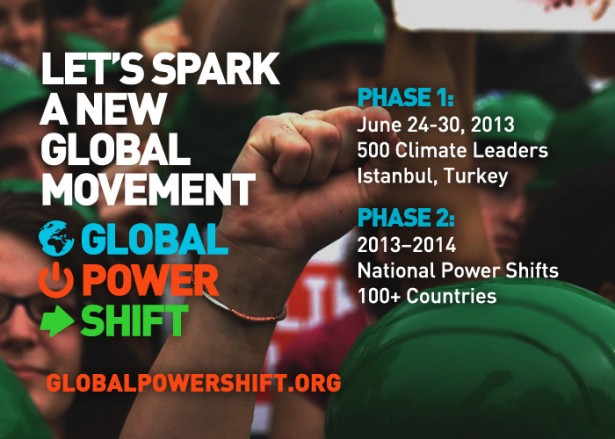 On Sunday I am going to be traveling to Istanbul for Global Power Shift, a climate justice summit that will be bringing people together from around the world for a week of skill-building, strategizing and movement visioning for the next stages in the fight against climate change. At the end of the week, we will bring what we learned back home and organize on the local level by planning regional and national gatherings. Over the coming months and years, the idea is that the Global Power Shift participants will work in local campaigns that are part of a global movement for environmental and climate justice.

I will be one of just eight Americans at the summit, and will be a representative of the fossil fuel divestment movement here, as I have spent the last few years organizing a divestment campaign at Swarthmore College in solidarity with communities fighting against mountaintop removal and fracking. But as someone coming from the United States, and doing solidarity organizing, my primary job will be to listen and learn from the incredible activists that I meet, and search for ways to support the work that they are already doing.

In recent months, divestment has been growing rapidly and getting a lot of national media attention, mobilizing thousands of students and bringing new attention to the climate movement. However, divestment is neither the most challenging nor the most important work in the struggle for climate justice; divestment campaigns are fundamentally about solidarity, not about fighting on the frontlines of extreme energy extraction or climate change.

By definition, divestment is a tactic for those at institutions that possess large amounts of capital to invest or divest at their will, whereas fossil fuel extraction disproportionately takes place in low-income communities and communities of color. Not surprisingly, these are the same communities being disproportionately affected by climate change, since they lack the economic resources and governmental support to respond.

As the movement for climate justice grows — which it will be doing over the next week — I want to ensure that the struggle is not centered around wealthy institutions like mine, but rather that we center it around those most threatened and most hurt by the extraction and consumption of fossil fuels. Therefore, my aim will not be to promote divestment, but rather to find ways to expand my solidarity organizing from a regional to a global level and build networks of support with people around the world.

My vision for international solidarity and support networks is not one where we are all fighting the same campaign or where there is top-down leadership telling local communities how to fight for climate justice. Rather, I envision a myriad of local campaigns with local leadership that can support and strengthen each other, helping each other win and build power from each victory as we all fight environmental degradation around us. These campaigns already exist, and now is the time to connect them. The forces — corporations and governments — causing and allowing climate change to happen are powerful; so we must build a movement even more powerful to fight them.

I don’t know yet what these global solidarity networks are going to look like — there’s no way I could before going to Istanbul and talking with all of the organizers who will be there about what support they need and how we can provide that for each other. But I am excited to go and find out. What better place, no less, than a city that is in a current state of uproar, sparked by a struggle for environmental justice. I may just end up learning more than I could have ever imagined.

Ali Roseberry-Polier is an intern at Waging Nonviolence.

A grayer ACT UP pickets for prevention

Fossil fuel divestment is about more than reducing emissions

From global to local power shift

A climate meeting of the minds