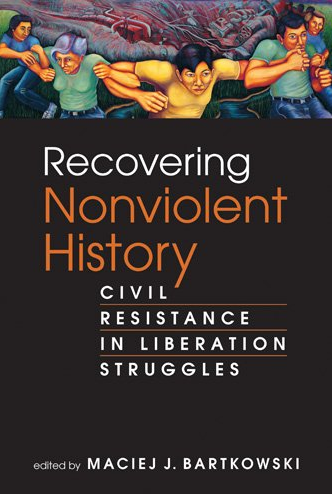 After a peripatetic life careening around Europe in the mid-19th century, a penniless Karl Marx spent long years at a desk in the British Museum writing Das Kapital, a work that laid out the economic laws of capitalist society — and would go on to have a vast impact globally through most of the following century.

What would the history of the past hundred years have been like had the Marxian engine toward the classless society been nonviolent people power rather than violent class struggle? What if a character more like Gandhi had staked out that desk in London — fresh, perhaps, from the movement that successfully ended British slavery — and churned out a text offering a diagnosis every bit as apt as Marx’s (perhaps not unlike the Mahatma’s own analysis of global capital in his still-useful 1909 tome, Hind Swaraj, or Indian Self-Rule), but with a radically different method for proceeding?

History, though, is what actually occurred — not what we hope occurred. On one level there is little more than entertainment value in spinning out intriguing and untethered counter-histories, the way a certain literary cottage industry does. (What if the South had won the Civil War? What if Albert Einstein had never lived? What if Israel had been temporarily established in Alaska after World War II and not in the Middle East?)

On another level, though, this kind of speculation might get us to wonder about what is being written now — and its potential consequences. Is there, for example, a Gandhian Marx somewhere, perhaps in exile and penury, dutifully plodding away at the Nonviolent Das Kapital — a book that will breathlessly capture the imagination of people across the planet and go on to function as a template for the operating systems of whole societies in the next generation, or the next century?

We haven’t seen this definitive text yet. Maybe we never will. Perhaps something like Marx’s book was so unique that it proved to be a historical one-off, so that even considering this possibility is a time-wasting detour. Or maybe books have had their day, and something else is going to come along to take their place.

If, however, this decisive volume does spring itself on humanity, it may be because the ground has been laid. First: the gathering momentum of nonviolent people power movements around the globe has nudged even the most skeptical observers to somehow take notice. It is the experience of public and engaged nonviolence, especially over the past half century, that has prompted concerted attention, just as the experience of violent revolution in Marx’s day prompted sociological focus. Second: an increasingly powerful lineage of nonviolence research and analysis has created a growing stream of books that have gone a long way in establishing not only a discipline but a genre. From Gene Sharp’s 1973 ground-breaking three-volume The Politics of Nonviolent Action forward, we are living in a time of immense data-collection and writing on the dynamics, methods and history of nonviolent change.

A powerful addition to this growing bibliography is Recovering Nonviolent History: Civil Resistance in Liberation Struggles, a new collection edited by Maciej J. Bartkowski. Here the authors ask a powerful question of the historical experience of national or societal liberation: has nonviolent civil resistance played an often ignored or forgotten role in these efforts? In the 15 cases featured here that represent almost every continent — from Ghana and Mozambique to Algeria and Iran, from Burma and Bangladesh to Hungary and Kosovo — the answer is a resounding, “Yes.”

In every case, scholars burrow into the experience of each society — generally over a time-frame of decades or even centuries — and identify often forgotten or repressed nonviolent movements that displayed a wide repertoire of tactics and which typically enlisted people from across society. These campaigns have often been central to the creation of parallel institutions, traditions and practices of civil society, and frameworks for participatory post-conflict societies. In fact, one of this book’s key contributions is its focus on how nonviolent strategies have been central to the identity formation of emergent societies and nations both during and after liberation struggles.

In some of the cases studied here, nonviolent campaigns have existed alongside armed struggle. Often, the memory of civil resistance has been obscured or even suppressed for a variety of ideological reasons (by regimes who consider violent combat more patriotic or whose own violent strategies are legitimated by a violent origin) or scholarly methodological biases. By focusing on nonviolent civil resistance, the book’s contributors illuminate an often forgotten history, but also demonstrate how key these efforts were to successful liberation movements.

Two sections of the book have particular resonance this week. The chapter on Egypt sheds light on the roots of this past week’s renewed pro-democracy marches and rallies. And the chapter on the birth of the United States throws in new relief the Independence Day celebrations taking place across the nation today.

The section on Egypt is a detailed reading of the history of nonviolent people power. Amr Abdalla and Yasmine Arafa’s chapter analyzes the country’s nonviolent resistance against foreign occupation, including the 1805 revolution’s street demonstrations, civil disobedience and a nonviolent siege; the 1881 movement sparked by Colonel Ahmed Orabi that won short-term demands and laid the groundwork for future mass-based campaigns; nonviolent resistance to British rule; and the 1919 revolution that led to formal independence in 1922, that included gathering 100,000 signatures on a prohibited petition, public statements, student demonstrations and strikes, workers’ and peasants’ strikes, public participation of women, demonstrations at public funerals, mass prayer and other forms of resistance. This essay documents a consistent spirit of nonviolent action, as echoed in Orabi’s statement about the 1881 movement: “Whoever has read history knows that European countries earned their freedom by violence, bloodshed and destruction, but we earned it in one hour without shedding a drop of blood, without putting fear in a heart, without transgressing on someone’s right, or damaging someone’s honor.”

Walter H. Conser, Jr.’s chapter on the U.S. struggle for independence opens with President John Adams’ assertion in an 1815 letter that “a history of military operations… is not a history of the American Revolution. The revolution was in the hearts and minds of the people, and in the union of the colonies; both of which were substantially effected before hostilities commenced.”

This nonviolent revolution took place between 1765 and 1775, marked by the campaigns against the Stamp Act and the Townshend Acts and the establishment of the Committees of Correspondence. This decade of nonviolent action included open resistance to specific acts of the British government, mass political and economic non-cooperation with British authority, and the development of parallel institutions, including institutions of government. Like Gandhi, the American colonists organized an obstructive program (denying the British the fruits of occupation through non-importation, non-consumption, and non-exportation) and a constructive program (creating new political institutions, like the First Continental Congress). “Self-government in the colonies was not gained by the war, as is so often assumed,” Conser writes. “It was actually established much earlier.”

If the nonviolent strategy was successful, why did the Americans resort to military operations in late 1775? Conser’s answer is that the colonists “underestimated or misunderstood the gains that the nonviolent resistance had achieved” and that the Second Continental Congress recruited European allies who drew on their experience to craft a military strategy. The same Congress proceeded to form an army.

While Conser judges this a shift in strategy, Jonathan Schell in his book The Unconquerable World: Power, Nonviolence and the Will of the People, frames it slightly differently. Schell, also working from letters by John Adams, asserts like Conser that the revolution was nonviolent. Once it was won, Schell says, the newly sovereign United States moved to defend itself militarily from “a foreign power seeking to force the new country back into its empire.” Schell quotes Adams as he takes umbrage at long-retired generals conflating the two in their memoirs. When Adams learns that Congress has hired a national painter, he argues that the paintings should be scenes of protest.

The United States may have turned out differently if its nonviolent origins had been taught, acknowledged and taken to heart over the past two centuries. But there’s no time like the present. Thanks to Recovering Nonviolent History and The Unconquerable World, it’s not too late to celebrate — and draw the beckoning conclusions from — the Nonviolent Fourth of July.