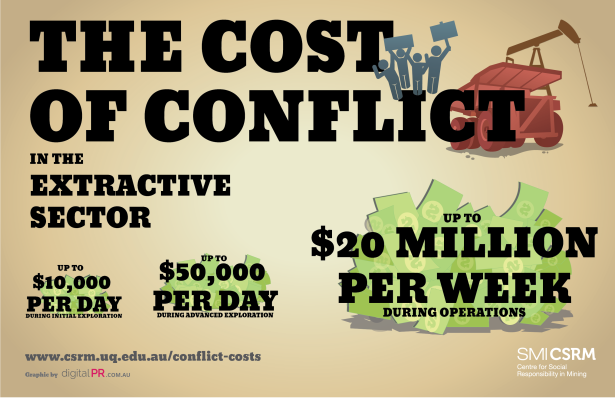 The knock on environmental protests is that they oftentimes only appear to delay the inevitable — be it forcing a coal-fired power plant to shut down for just one day or forcing the construction of a pipeline to be rerouted. But what if those delays really were more than symbolic victories? What if they amounted to something really powerful that actually imposed serious costs on industry? Well, that’s exactly what a new study says.

According to researchers from the University of Queensland, Harvard Kennedy School and Clark University, conflict has become a major contributor to the cost of projects in the mining, oil and gas industries. The researchers looked at 50 planned major extractive projects and found that local communities launched some sort of “project blockade” in half of them, leading to 15 percent of the projects being suspended or abandoned.

“There is a popular misconception that local communities are powerless in the face of large corporations and governments,” said Daniel Franks, Deputy Director of UQ’s Centre for Social Responsibility in Mining. “Our findings show that community mobilization can be very effective at raising the costs to companies.”

The research, which is based on confidential interviews with 45 high-level industry officials, found that delays caused by conflict with communities can result in the loss of $20 million per week for mining projects valued between $3 billion to $5 billion. One company’s costs reached $6 billion over two years — more than 10 percent of its annual operating profits. In general, though, protests were most successful when they took place early on, during the planning and construction phases of a project.

“This [is] in part because the project is smaller in scale and therefore easier to contest,” Franks told Vice’s Motherboard, “but also because at later stages of the project cycle, capital has been sunk into an area, changes become costly to retrofit, revenues begin to be generated, and there are increased incentives for companies and governments to ‘defend’ their projects.”

The lesson for companies, according to the researchers, is to consider the benefits of building relationships with communities.

“If companies are interested in securing their profits,” Franks explained in an interview with Rabble, “then they need to have high environmental and social standards and collaborate with communities.”

While greater control over these projects may be enough for some communities, many others are saying “no” altogether to extraction. And the cost of such resistance should not be minimized either. In 40 percent of the projects researched in this study, at least one person died as a result of physical protest. But knowing that these deaths are not in vain, that they are actually part of successful movements, casts new light on resistance efforts.

Take, for instance, the recent crackdown by Guatamalan police forces on the peaceful protesters who have been blocking the entrance to El Tambor gold mine for over two years. According to the blog MiMundo.org, police violently evicted the locals so that heavy machinery could be introduced to the industrial site. What might normally be considered a tragic scene — women singing and praying until they were faced with tear gas, and others were injured and detained — can now be seen in the broader context of imposing serious costs to the mining industry, costs that could eventually kill the project.

Guatemala rises up against institutionalized corruption

Vision is finally on the rise in U.S. politics