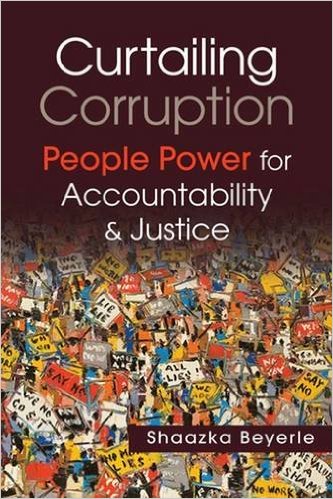 Corruption is a widespread and global phenomenon, ranging from “narco-corruption” in Central America to “petty corruption” in Eastern Europe, such as candidates buying votes with buckwheat and sunflower oil before elections. Rather than focusing on the issue itself, Shaazka Beyerle explores how corruption is being curbed with civil resistance in her new book “Curtailing Corruption: People Power for Accountability and Justice.” Beyerle documents and analyzes civic grassroots initiatives that have expressed clear demands, reached their objectives, employed an array of nonviolent actions, and were sustained over a period of time. Twelve fascinating accounts are presented in the book with country-specific context, campaign attributes and outcomes.

Beyerle begins by conceptualizing the link between corruption and violence. One place that corruption flourishes is in post-conflict settings in which illicit structures profit through the arms trade, and the trafficking of drugs and people — causing much human suffering. For instance, since the war in the Democratic Republic of Congo began in 1998, 3.5 million lives have been lost, while military and rebel groups have enriched themselves off of the country’s resources. Beyerle explains that civil resistance by citizens who are impeded by the nexus of paramilitary groups and organized crime sometimes leads to successful campaigns.

Every case study in the book takes place over the last 20 years, and some are still ongoing. The geographical scope includes Afghanistan, Bosnia-Herzegovina, Brazil, Egypt, India, Indonesia, Italy, Kenya, Mexico, Korea, Turkey and Uganda. Beyerle argues that the collective power of citizens who strategically use nonviolent actions created political will where it did not exist before, and developed social accountability for improving government processes.

For instance, in Brazil in 2008, a coalition of 44 civic groups, including religious, professional and trade organizations, collected 1.6 million handwritten signatures to introduce legislation to Congress that would prevent individuals with a criminal record from running for elected office. This was followed by massive digital civil resistance, which included mass emails sent to legislators and an online petition in favor of the bill signed by two million people, among other nonviolent actions. Beyerle sites one of the campaigners, Graziela Tanaka, who said, “the movement took on an air of people power omnipresence, congressmen could not run away from it.”

Beyerle said she was inspired to pursue this multi-year project after she heard about the 1997 “One Minute of Darkness for Constant Light” campaign in Turkey at a conference, which she also included as a case study in the book. This civil resistance campaign mobilized 30 million people through low-risk mass actions — like turning off lights simultaneously (hence the name of the campaign), banging pots and pans, holding candlelit vigils, mailing “stolen” copies of the high court inquiries to legislators — and succeeded in empowering citizens to overcome their fear of confronting the criminal syndicate ruling the country at the time. Since the campaign happened before the Internet boom, Ersin Salman, a public relations professional — with a group of regular citizens from all walks of life — reached out and received support from about 60 print columnists who then spread information about the mobilization.

The goal of the movement was to pressure the government to take specific measures against corruption and links between the state and organized crime. In many ways the campaign succeeded, as mafia leaders, police, military and business officials were brought to trial. Although collaborators in the government were set free, citizens changed the profile of the parliament in the following election. Furthermore, a series of nonviolent campaigns followed on issues including university entrance exams, the privatization of water, and nuclear reactors, among others. The “One Minute of Darkness for Constant Light” altered the relationship between Turkish citizens and power holders. “Now even generals are answerable to the people,” Salman said.

The synergy between anti-corruption efforts and peacebuilding that Beyerle depicts is particularly interesting. Despite their differences, both have overlapping long-term goals — like social and economic justice, government accountability and the protection of human rights. Beyerle argues that in places like Afghanistan, Sierra Leone and the Democratic Republic of Congo, where those involved in organized crime reap the benefits of instability and easily win seats in parliament, a successful transition to democracy and stability is difficult to achieve, although it is nevertheless possible.

The various campaigns covered in the book do not follow one specific “magic formula” to root out corruption, but in each case organizers put significant energy into strategizing and planning. Furthermore, toward the end of the book, Beyerle offers 15 general lessons gleaned from the campaigns she documents. I found a few of these lessons particularly important, like unity, which involves building coalitions that increase diversity and lead to high levels of participation. Another point that she highlights is the importance of using low-risk mass actions, which help citizens to overcome fear in hostile environments. She argues that there are also intangible qualities that can be cultivated, such as an honest image, which builds credibility and stimulates wide support, and legitimacy, which prevents intimidation like she skillfully describes in her case studies of Afghanistan, Bosnia-Herzegovina, India, Italy and Uganda.

The overall message of the book is one of hope. It is nonviolent, strategic and collective action that creates shifts in attitudes. Across a diverse set of the cases, Beyerle shows regular citizens moving “from resignation to action,” and succeeding in their struggles against corruption in the process.

Elena Volkava is a non-resident fellow at the Center for Transatlantic Relations, at the School of Advanced International Studies at Johns Hopkins University. Elena’s research focus is on Eastern Europe and human rights internationally. She has been a research assistant at the International Center on Nonviolent Conflict, where she wrote about civil resistance in Ukraine, Belarus and Russia. Elena is pursuing MA at Georgetown University.

Localflux — crowdfunding and crowd-making in the wake of Hurricane Sandy

Inside the occupation of Greece’s public broadcaster