It’s that time of year to embrace highlights and bury the out-of-date. As activists, this can be a critical time to evaluate our strategies and alight on alternate paths if needed.

Earlier this month, in Paris, activists with the Laboratory of Insurrectionary Imagination and others launched the Climate Games to counterbalance the U.N. climate talks — yet another international convention full of hot air on an ever more scorched earth. Climate Game Awards were used as a tool to inspire strategic action and encourage community building. So, in appreciation for activists who have gone beyond the ordinary, mobilized magnificent resources, turned commonplace objects into magic wielding wands, or fabricated harbingers of even more technologically advanced and nuanced stunts, I bring you the 2015 Creative Activist Awards.

Let these awards inspire new creative heights for actions within your strategic activist plans. So, without further ado, here are the winners.

This one goes to two groups, one in Russia and one in Spain. In the former, handicap citizens with the organization Dislife, installed holograms of a disabled person in a wheelchair that would flash on when a non-handicap labeled car would try to park in their spot. This was done using a fine mist for the projection and a security camera that would verify (or not) the presence of a handicap sticker on the vehicle. “Don’t pretend I don’t exist” says the holographic wheelchair activist in a bit of misty brilliance.

In Spain, when the Spanish Parliament outlawed protests, No Somos Delito, or NSD, created the world’s first holographic protest march. “The law is surreal — so surreal that it drove us to do something equally surreal, “ said Carlos Escaño of NSD. “It’s about art, about going to a place beyond discourse. It’s about touching emotion.” Beyond that, though, it is about defying citizen security laws in a way that both protects civil society and fights the surreal with surreal.

We have entered the A.D.(After Drone) age of tagging and graffiti. A well-known graffiti artist and vandal used a six-story-tall fashion spread in New York City as a first canvas for his newly engineered graffiti spray paint drone. While not quite in the pretty category yet, the potential is huge. We eagerly await Graffiti Drone 2.0.

Maricon Collective painted a classic and gorgeous mural featuring gay, lesbian and transgender latin@s on Galería de la Raza’s wall in San Francisco, only to have it vandalized several times. The mural has been repaired at least three times. The gallery has committed to restoring it as many times as it takes because they feel that no one should be marginalized or erased from their history.

Fed up with the dithering of our politicians while regular citizens suffered without recompense, Thom Feeny, a London shoe shop worker, calculated that a 3 euro donation from every European was all it would take to solve the Greek debt crisis and get folks back on their feet. With this back-of-the-envelope calculation, he launched an IndieGoGo “Greek Bailout Fund” Campaign to do just that. Although it did not reach its 1.6 billion euro target, it did mobilize more than 100,000 ordinary people from 182 countries to pledge 2 million euros — an impressive and heartwarming people-to-people response.

In an old school Anonymous move, they declared a National Trolling Day of anti-ISIS memes and propaganda, and swapped rubber ducks in for jihadists across the Internet. Kill them with humor, it has been said.

No Pussy Footing Around Award

In Belgium, following the November 13 Paris attacks, the hashtag #BrusselsLockdown was overwhelmed with cat pictures when the police requested silence about its anti-terrorist operations. Apparently, locals took the reference to heart as the security level was raised to four, or “quatre” in French. For those in the know, “quatre” is pronounced “cat.”

You have to do some things yourself if you want them done in a timely fashion. While the politicians pontificated, Bree Newsome took her place in the annals of nonviolent direct action and lowered the Confederate Flag in front of the South Carolina Statehouse. As the United States continued to reel from the terrorist shootings just 10 days earlier in Charleston, Bree’s action became a beacon for fighting racism and white supremacy across the nation.

The National Day of Action for Black Women and Girls was amplified by topless women protesters blocking traffic in San Francisco. In the tradition of their African grandmothers, the women used this tactic to boldly declare “our bodies are not for your consumption” as they stood up to white supremacy and patriarchy.

As in many parts of the world, South Africa was rocked this year by student protests. Calling out the fallacy of post-apartheid opportunity and continued inequality, student Chumani Maxwele dumped a bucket of shit on the head of a bronze statue of 19th Century British colonialist Cecil John Rhodes on the University of Cape Town campus. Not just any shit, but poo collected in a bucket from a local township without running water, a physical embodiment of the student’s issues. As such, this is known locally as the “poo protest.”

Dystopic “bemusement” Theme Park anyone? We’d expect nothing less from Banksy and 58 other artists. Amid a decomposing castle, crashed police van and overturned Cinderella’s chariot, Dismaland delivered despair, gloom, politics and controversy on the site of an old factory in an English seaside town last summer. In one particularly disturbing installation, there was even the opportunity to drive miniature boats overflowing with miniature refugees across a dirty pool. 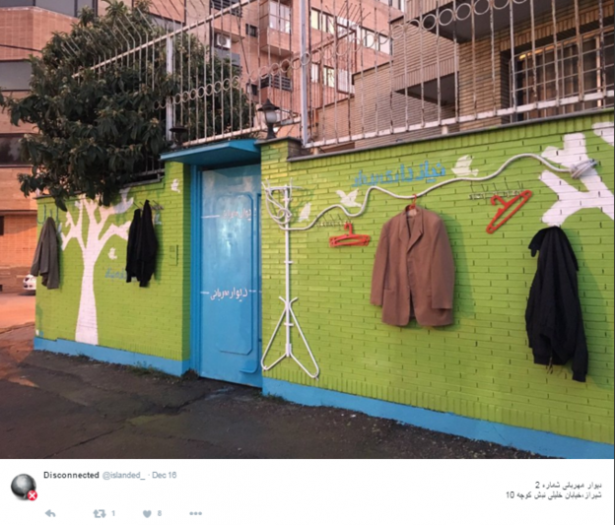 Times are hard in many places. In Iran, “Walls of Kindness” have spontaneously popped up in several cities, featuring decorations with clothes, shoes and coats for the needy next to the words. “If you don’t need it, leave it. If you need it, take it.” Refrigerators where food can be left for the homeless have also been sighted, as part of another community response initiative called “Payan-e Kartonkhabi,” or “ending homelessness.”

As an activist artist, strategic nonviolent organizer, and Training Director of Beautiful Trouble, Nadine Bloch explores the potent intersection of art and people power. Find more of her writing in "Beautiful Trouble," "SNAP: An Action Guide to Synergizing Nonviolent Action and Peacebuilding," and "From Airtable to Zoom:An A-to-Z Guide to Digital Tech and Activism 2021."

A Thanksgiving call for help from a mother in prison