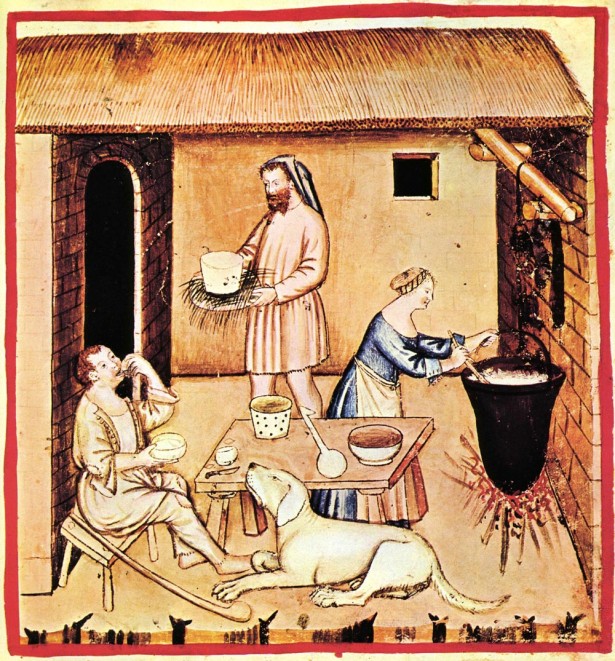 I’m not feeling very radical these days. There is not a lot of fighting the power or beating the system or rocking the boat. I am taking care of kids. Right now, that involves a lot of ballet lessons, broccoli summits and fielding questions about superhero characteristics.

“Mooooom? Does he wear leggings, Mom?”

“Is there a girl Batman? Mom!”

“Oh yeah, and I am making cheese.”

Blessed are the cheesemakers.

I was reminded of that line from Monty Python’s “Life of Brian” last Saturday afternoon, while teaching 20 folks how to make simple cheeses in an Episcopal church hall in New London, Connecticut. Of course, as the rest of the line goes, it’s not meant to be taken literally. It refers to all manufacturers of dairy products.

I presented cheesemaking as an exercise in self-sufficiency, exploration and embracing mystery. That might strike you as a little too high-minded for the simple act of mixing warm milk and vinegar. But the throng of curious dairy lovers were all on the same page. They were eager to get an introduction to cheesemaking and semi-appreciative of my many curds and whey jokes.

Until relatively recently in human history, making cheese was an intensely local, home or village craft passed down and adapted generation to generation. At its most elemental, cheesemaking is a process of preserving and concentrating a perishable farm product, and there are countless ways to do that. I showed the class how to tackle three — ricotta (milk and vinegar), paneer (milk and citrus) and mozzarella (milk, rennet and citric acid) — in our short time together.

I started making cheese and yogurt at home because our family is on Women, Infants and Children, or WIC — a program that offers nutritional subsidies to families with small children. We have been getting WIC since I was pregnant with Seamus (now nearly 4) and can stay on it until Madeline (who just turned 2) is 5. Every month, we get vouchers for six gallons of milk, and — because the vouchers require you to purchase everything all at once — we often get two or three gallons at a time. That is a lot of milk for our slightly lactose-intolerant family. I grew up on powdered milk (which is so gross) and never had a hankering for a tall glass of milk. Our kids drink it occasionally, and we pour it on our cereal (of course), but we’d never consume six gallons a month. So, I turned to yogurt and then to cheese as a way of getting it into our kids’ bodies.

Every time I make it, I feel the magic. I know it is science — all about fat and sugar molecules (or something) and good bacteria. But there is a “Wow, I can’t believe that worked” moment that puts me in touch with my ancestors 200 years ago, who made cheese in between hauling water, chopping firewood, tending their gardens and staving off disease. They would not be impressed by me, but I am trying.

What’s more, making cheese — even the really simple cheeses — puts me in touch with how strange our relationship to food is in the United States. There are hundreds of cooking shows on TV, thousands of new cookbooks each year (Gwyneth Paltrow has one coming out this month) and — get this — no one cooks any more.

Well, that is not entirely true, but in March, for the first time ever (at least since the Commerce Department started paying attention), people in the United States spent more money in restaurants and bars than at grocery stores. That is sort of staggering, isn’t it? At least for our eating-out-once-a-month (maybe) family.

Are those restaurant denizens the same folks who would drop $30 on the “Skinnytaste Cookbook”? Or buy the “Thug Kitchen Official Cookbook” (whose subtitle is “Eat Like you Give a F*ck,” for a list price of $25.99)? And are they the same people who are always on a diet? Forty-five million Americans are dieting right now, and that is not just eating less and exercising more — it is also spending $33 billion on books, apps, gym memberships, boxed low-calorie meals, special shakes and inspiration (according to the Boston Medical Center estimates). See what I mean about a strange relationship with food and with food-like substances? The average person in this country gets nearly 60 percent of their daily energy intake and about 90 percent of their added sugar from “ultra-processed” foods (even with all that buying cookbooks and going on diets).

I like how making cheese from free milk that the government gives me allows me to circumvent this whole twisted economy of food, convenience and fear of fatness. But then I think about milk — where it comes from, how it gets from a lactating cow to a gallon jug in my shopping cart — and I know I am caught in a whole other twisted food web.

Marion Nestle, a professor at New York University, tried to teach a class on the Farm Bill and realized that it was too dense, too political and too contradictory to add up to sensible food policy. Many aspects of the Farm Bill are in direct conflict with the goals of healthy living, sustainable agriculture or food security. If you tried to eat a plate of the Farm Bill, she writes in In These Times, you’d be scolded by your doctor because “more than three-quarters of your plate would be taken up by a massive corn fritter (80 percent of benefits go to corn, grains and soy oil). You’d have a Dixie cup of milk (dairy gets 3 percent), a hamburger the size of a half dollar (livestock: 2 percent), two peas (fruits and vegetables: 0.45 percent) and an after-dinner cigarette (tobacco: 2 percent). Oh, and a really big linen napkin (cotton: 13 percent) to dab your lips.”

Yuck. No wonder cheese is the most shoplifted item in the world (bet those of you who don’t listen to “Science Friday” on NPR didn’t know that).

I still have a lot to learn about food and food policy, but — in the meantime— this is how you make cheese: Pour milk in heavy bottomed pot, add salt and bring to a boil. Stir in a few tablespoons of vinegar. Let it sit for a minute and then strain through cheesecloth. Half an hour later, you are noshing on delicious ricotta. Now that’s radical.