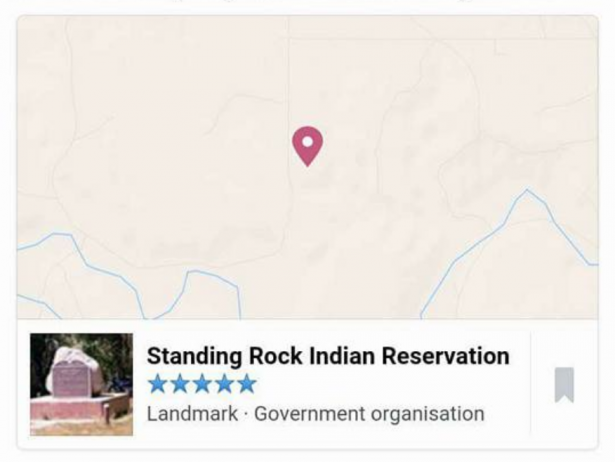 Last weekend brought unprecedented escalation between law enforcement and demonstrators at the site of the Dakota Access Pipeline in North Dakota. Over 140 protesters were arrested as police used riot gear to disperse the demonstration. On Monday, organizers still reeling from these events received a surge of public solidarity on social media. More than a million online supporters used Facebook to “check in,” registering their location to appear as present at Standing Rock, North Dakota. After publicly checking in to the protest camp, participants followed up with a post — visible to “friends only” — that explained the purpose of the action: to block local law enforcement from using Facebook to locate and monitor protesters.

The trend quickly generated thousands of reposts, drawing the attention of mainstream media and North Dakota law enforcement. Social media and citizen journalism have been pillars of the #NoDAPL movement, but the Morton County Sheriff’s office told Snopes that it was not only “not using Facebook check-ins as a gauge of anything,” but also that “the metric presented no intelligence value to them.” However, Standing Rock organizers have said, “There is no doubt that law enforcement comb social media for incriminating material and monitor communications.” While this allegation is difficult to verify, The Atlantic has reported that North Dakota lists the social media tracking program Geofeedia as one of their IT applications.

Solidarity check-ins have been used similarly in the past, as when Twitter users switched their location to Tehran in an attempt to confuse Iranian authorities cracking down on protesters in 2009. While some have questioned the effectiveness of the tactic, organizers at the Camp of the Sacred Stones have expressed their appreciation for the mass show of solidarity, saying, “The check-in’s have created a huge influx of media attention” and that they “encourage people to come up with creative ways to act in solidarity.”

Meanwhile, beleaguered demonstrators on site in North Dakota are reporting increasing desperation. As demonstrators are returning to the site after Friday’s mass arrests, many organizers are bracing for what they’re calling the “last stand.” After months of nonviolent demonstration, political advocacy, legal battles, prayer camps, and online campaigns, members of the Sacred Stones camp have watched the pipeline continue to encroach on native land. Now, according to organizers, the construction has nearly reached the sacred Missouri River — a red line for many native people. As Sicangu Lakota tribe member and Sacred Stones camp organizer Cheryl Angel told the Guardian, “They’re right there. They have breached our sacred ground. There is no time for waiting any more. It is almost complete. All they need to do is go under that river.”

Given the intensity of the situation, organizers have called on their Facebook supporters to show solidarity in other ways as well, such as through political advocacy and financial support for the protesters’ legal defense, or by showing up in person.

Sarah Aziza is an Arab-American writer, graduate student and activist based in NYC. She has previously worked among refugee populations in North Africa, Jordan and the West Bank. Her areas of focus include immigration, human rights, international politics, feminism and mental health. She is a lover of the story-less-told. Find her on Twitter @SarahAziza1 or www.sarahaziza.com

That moment when your good parenting is finally rewarded