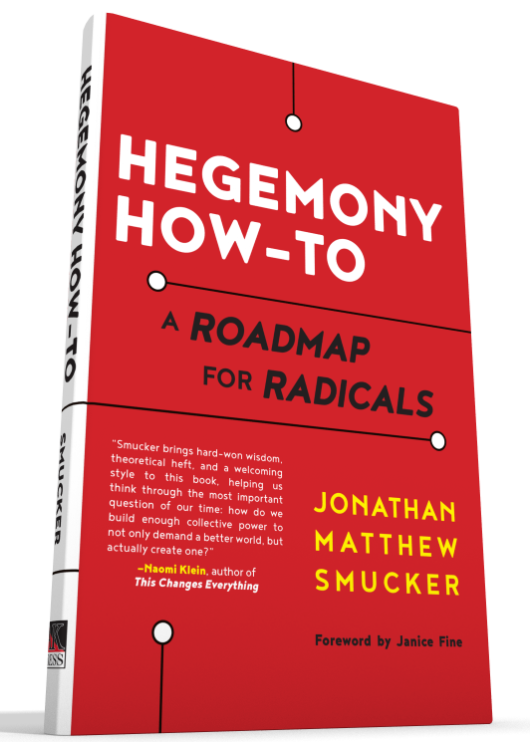 As alumni of the 2011 Occupy Wall Street phenomenon might tell you, more preparation might have expanded Occupy’s impact. Such a “movement moment” is inevitably marked by improvisation, but bringing lessons learned from previous uprisings is bound to help.

More such moments are on their way — particularly in countries like the United States, which are experiencing increasing polarization and longer-term decline of the legitimacy of both political and economic establishments.

We can’t predict where and when the next movement moment will start. Fortunately, help has shown up to steer us away from predictable mistakes when the moment comes.

Jonathan Matthew Smucker’s new book is right in time, revealing deep learning from the important role he played in the Occupy movement. He also draws on years of other organizing work and his research on social movements.

The book starts with a deliberately provocative title: “Hegemony How-To: A Road Map for Radicals.” Hegemony, Smucker says, is acceptance by the mainstream of a particular worldview as common sense. He expects we free-thinkers might be reluctant to foist upon society a new orthodoxy. He challenges us nevertheless: At heart, don’t we want ours to be the leading values in mainstream society?

An example from my own research would be the revolutionary movement in Norway. A century ago, capitalism and the patriarchy were hegemonic — the “common sense” of the mainstream. The values of equality, democracy, and cooperation were held by a small counter-cultural movement of workers, farmers and their middle-class allies.

The movement practiced its values in small co-ops, unions and student associations. Their plan was to nonviolently force a power shift, putting their values into practice on a policy level and eroding the mainstream’s previous faith in inequality. In other words, a small movement intended to make their values the new Norwegian common sense.

The small movement grew and made their revolution. In January, the Guardian reported on a recent study by behavioral economists comparing American and Norwegian workers’ attitudes toward inequality. The results from three different experiments were the same: The Norwegians were far less accepting of inequality and much more willing than the Americans to try to redress it. Clearly, the revolution worked.

In Occupy, however, Smucker observed a reluctance to be as bold as the Norwegians had been a century ago, a refusal to make specific policy demands, much less project a vision of what we want. He began to wonder if self-identified activists are content in their proud marginality, having a monopoly on truth. If our worldview became common sense, do we fear that would mean we’re less special, less ourselves? Do we believe our identity depends on differentiating ourselves from most people? In some unconscious way, that would help account for Occupy’s inability — even unwillingness — to reach out “beyond the choir,” or even to accept and act on many of the requests that came from outside to join in and support the movement.

The response of elites to Occupy

In the early days of Occupy I suspect that the economic and political elites’ worry was shown by the extraordinary attention given by mass media. Even though not all that many people participated in the Occupy sites, their rapid growth and accuracy in naming class struggle revealed the movement’s potential force, which was scary to the privileged.

I believe that the scariness in those initial weeks was partly in response to the fact that the occupations were sustained over time. That feature contrasts with one-off demonstrations like the Women’s March on January 21, which received little media attention considering it was the largest protest in U.S. history. Elites know that the people attending one-off rallies and marches will go home promptly. One-off actions have little power potential because they announce in advance that they won’t be disrupting anything for long. Occupy’s early days, though, left everyone wondering: Would Occupy’s sticking around mean it will grow, involving masses of people who don’t have a previous identity as “activists?”

Smucker helpfully distinguishes between potential and kinetic force. Kinetic force actually shifts power and makes structural change possible. “Occupy Wall Street,” he writes, “signaled the potential for a broad alignment focused on economic inequality and a rigged political system that serves the ‘1 percent.’ After a few weeks … the amorphous mobilization was recognized by a substantial cross-section of the progressive left ‘establishment’ (e.g. institutions including labor unions, community organizations, national organizations, and other membership organizations) as having de facto provided the potential for such an alignment.”

Smucker believes Occupy was unable to realize that potential partly because of its unwillingness to give up its specialness, its identity, as different from not only the 1 percent but most of the 99 percent as well. Instead of seeing its values as a gift offered to the majority, it resisted sharing with those who didn’t pass an ever-higher litmus test of purity and commitment. In effect, it chose against growing large enough to force a power shift in U.S. society.

How ‘activists’ limit a movement’s potential

I admire the compassion with which Smucker explores why we sometimes undermine our own intention. He acknowledges that in our society individuals really are being atomized. Many feel lonely. It’s a relief to find a clubhouse where people can hang out with others like themselves, to join “the cool kids.”

Individuals do indeed deserve community. The problem, Smucker says, comes when we make the need for community more important than our mission. We then settle for having been influential (Occupy did, after all, bring inequality into U.S. political discourse), not having changed any policies that make inequality grow ever larger.

He suspects another fear might be lurking beneath the surface: fear of being powerful. I’ve noticed that not enough of us operate with author and organizer Starhawk’s distinction of power-over (domination), power-with (cooperation) and power-from-within (spiritual assertion). Unconsciously we may accept the patriarchal view that “getting things done” requires power-over.

In order to resist power-over in our movements we distrust each other, make a fetish of consensus and disavow open leadership. We falsely believe that building effective organizations to foster mass revolutionary movements requires becoming bureaucracies willing to sell out. To avoid this danger, we sacrifice our mission, choosing behaviors that limit our organizational effectiveness.

Smucker also reports another group life dynamic that shows up, inside Occupy and elsewhere, by quoting author Bill Bishop: “In like-minded groups over time ‘people are constantly comparing their beliefs and actions to those of the group. When a person learns that others in the group share his or her general beliefs, he or she finds it socially advantageous to adopt a position slightly more extreme than the group average. It’s a safe way to stand out from the crowd … It’s counter-intuitive, but people grow more extreme within homogeneous groups as a way to conform.’”

That evolution toward the ever-more-extreme position traps the group in its bubble, disconnecting it from the diversity of people who are open to change. We see this among groups on college campuses as well as in urban neighborhoods.

For Smucker, this dynamic is one more reason why we can’t expect to make the most of movement moments unless we pay attention to the self-limiting aspects of internal movement life. His book heightens our awareness and points to potential solutions.

I would add two solutions, however, to the ones he includes. Even fairly homogeneous groups can transcend the dynamics he names by centering on campaigns and cooperative businesses. A campaign creates a specific demand and constantly evaluates its progress toward that goal. If the group gets caught in self-limiting dynamics, it fails. Similarly, a cooperative business has a bottom line. If group dynamics seriously sabotages worker productivity, the group either wakes up or the business fails.

Inspiration from the past

In a brilliant and nuanced section on organizational culture and leadership, Smucker compares the trajectory of two high-profile ‘60s organizations: the Students for a Democratic Society, or SDS, and the Student Nonviolent Coordinating Committee, or SNCC. A familiar dynamic occurred in both: Members gave leadership status to individuals who best represented the culture of the group, who were most “hardcore.”

At a certain point in each group’s life the leaders led their groups in opposite directions. In SDS, the group imploded in 1969 and some leaders used hardcore status to start the doomed Weather Underground. In SNCC, “very astute leaders defined hardcore to mean efforts such as going into the most segregated areas in the South and organizing.” SNCC’s choice led to exercising its greatest power on the national scene.

In each group both members and leaders can take responsibility for the dramatically different outcomes. What Smucker shows is how the largely-unconscious group culture influences direction. That awareness can free us to take charge.

When we take charge of our own group culture, we are at the same time showing that we can be trusted to pursue the larger revolutionary project. Smucker’s book offers a kind of chart for diagnosing the condition of our own group’s culture — a gift to us all.