The warning drums for a contested election are beating louder and louder. At a recent campaign stop in Scranton, Pennsylvania, Trump once again laid the groundwork for not stepping down by saying, “The only way [the Democrats] are going to win is by a rigged election.”

The concern for what Trump might do in the absence of a landslide Biden victory has even led one bi-partisan group of experienced legal and political minds to run a “war-game” type experiment called the Transition Integrity Project.

As co-convener Rosa Brooks told The New York Times, “The depressing overall thrust of our exercises ended up being that if the Trump campaign is in fact truly determined to stay in power no matter what, and is willing to be absolutely ruthless about it, it’s hard to know what stops that.”

If there is a way, however, the project did note it would come in the form of mass direct action. This is why many individuals and activist groups — including many involved in the recent protests across the country — are beginning to do preliminary thinking.

Planning our lives for November

As we begin to wrap our minds around a situation demanding we be “all-in,” one question is: What we can expect? No one knows, of course, but at least we can look at coup attempts that have been defeated by mass action in other countries to get an idea.

Political scientist Stephen Zunes researched eight countries where mass action defeated a coup attempt, and found that in most of them the resolution was quick. For example, it took three days for the Russians in 1991, 4 days for the French in 1961 and 16 days for Bolivians in 1978. However, it took much longer in Venezuela in 1958, with the struggle lasting 11 months.

Zunes’s research suggests that the quicker the mobilization, the quicker the resolution. In Thailand in 1992, for example, people resisted on a smaller scale for 13 months, but when their movement swelled in size the Thais won only six weeks later. This was one of the cases supporting Zunes’ thesis that for winning, alliance-building matters.

While each situation is unique and we can’t know just how our crisis will play out, one take-away from the research is clear: The more quickly we nonviolently disrupt the plans of Trump’s team — at scale — the less longer-term disruption to our country and our lives.

How can we influence the center to join us?

I asked Stephen Zunes about how the perceptions of different people on the political spectrum influence the outcome of a power grab. He confirmed the importance of the political center, especially if the center initially holds itself aloof from the mass struggle. (In this country, that might look like the national Democratic Party leadership appealing to the Supreme Court instead of joining the mass noncooperation campaign.)

“Authoritarian rulers fear peaceful resistance above all else.”

When the first people to resist use tactics and rhetoric that make sense to those in the center who have been hoping to stay “above the fray,” the center is likely to throw its weight more strongly against the coup. Then, together, it can be defeated.

On the flip side, choosing tactics and rhetoric that seem highly righteous and glorious — but make it harder for the center to join — risks prolonging the struggle. Early alliance-building across political lines is key, and our tactics influence our success in doing that.

Fortunately, the choice is in our hands: We can choose direct action tactics that strongly contrast with Trump’s likely call for armed members of his base to rise up to defend him. Through our own behavior we can take the moral high ground.

Would-be dictators hate this. That’s why Trump tried to minimize the difference between nonviolent demonstrators at Charlottesville and violent white supremacists. “Fine people on both sides,” he said. Authoritarians fear the increased power that people have when they choose nonviolence.

A dramatic example of this fear was revealed when Syrian dictator Bashar al-Assad released hundreds of terrorists from prison during the nonviolent uprising against him in the Arab Spring of 2011. His problem in Damascus was that more and more people were joining massive peaceful demonstrations against his rule.

Assad therefore released the terrorists he held in prison, in order to radicalize the protests and justify his unleashing heavy violence against the mass demonstrations. As it turned out, Assad was willing to gas and kill any number of people strongly opposed to him, in the name of “law and order.” The center hesitated, and the movement lost.

The center is often reluctant to side with a violent mass movement. That’s why Assad wanted Syria’s nonviolent movement to turn violent. Assad is not unique. A historian of authoritarian regimes at George Washington University, Matthew Levinger, writes that “authoritarian rulers fear peaceful resistance above all else.” 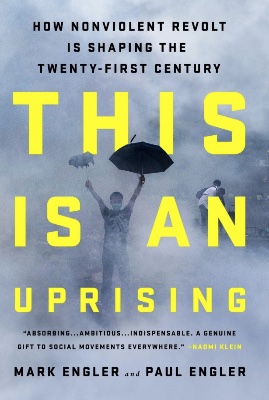 The pragmatic, strategic sense of the people

Another question is sure to come up: How did the successful anti-coup movements remain nonviolent when violence was used against them? Did they have an equivalent of Gandhi or King in their midst, preaching nonviolence?

According to Zunes, “None of the successful cases I studied included a pacifist or moral commitment to nonviolence. They realized as a practical matter that using violence would play into the strengths of the coup plotters. Instead, they wanted to weaken the morale, and even win over as many as possible of those on the ground level who were supposed to repress them. And the activists couldn’t win them over if they were attacking them.”

Moralism sometimes blocks the ordinary human process of figuring out “what works.”

In Zunes’ paper he tells about Argentina in 1987, when the people resisted an attempted military coup. Thousands of people marched past a tank into a military base just outside Buenos Aires and persuaded the soldiers to refuse to act against them, forcing the 80 officers at that base to surrender.

In the Soviet Union in 1991,“protesters in Moscow and elsewhere distributed leaflets, food, and sanctuary to soldiers, and spoke and argued with them on the streets to convince them to defect or refuse orders. This resulted in large numbers of soldiers and even entire military units switching sides.”

The research points to a weakness we have on the radical left, as we assess our strengths and weaknesses prior to a possible coup attempt. Years of shaming and blaming on the left in the name of anti-oppression work have resulted in moralism growing stronger among us — so strong that it can even drown out strategy. Saying the right words, taking the “correct moral positions,” is sometimes considered more important than figuring out what it takes to win struggles for a just society.

Moralists are fearful of any appearance of lack of solidarity with the oppressed, to the point that moralists will sometimes justify behavior that weakens our actual chance to win — behavior like setting cars aflame, which aids Trump’s efforts to make a bigger issue of “law and order.”

Moralism sometimes blocks the ordinary human process of figuring out “what works.” It becomes a philosophy that insists that it’s more important to be righteous than to succeed. As a gay, working-class man I’m on intimate terms with my own righteous anger, but have tried to remain open to people outside my oppressed identities who were good at strategy. I am that hungry to win.

Strategic wisdom is also available among strong survivors — people whose life experience has been especially challenging. That was one reason why, when I taught at the Martin Luther King School of Social Change, our curriculum included field placements in poor neighborhoods. Our students were sometimes astonished at their discoveries.

One of my students began with a different picture of moralism. She believed that moralism was preventing a pragmatic appreciation for violence. Lily Everett, a Black woman from the South, said she believed that it was Martin Luther King Jr., who was the moralist. What would make pragmatic sense was to add violence to the toolkit of the movement for Black liberation. These days we call this view “diversity of tactics.” She and my other students debated this vigorously.

Lily was excited when she learned that her field placement would be in a poor Black neighborhood in North Philly — where at last she could discuss her own perspective with “the people.”

I met with her after a few weeks in the neighborhood and asked her how it was going. “Well,” she said, “I raised my idea of adding some violence to our struggle.”

Another Black student at the King School, Phil McLaurin, shared with us the concept of “mother-wit” — a wisdom of Black working-class people that promotes resilience and attention to what works. Philosophers might call it pragmatism. It’s what Zunes believes is the reasoning in mass nonviolent movements that succeed in defeating violent coup plotters. People reason: If we do this, then our opponent will do that – not good!

Our own radical left movement may need to learn (or re-learn) pragmatism. In their study of a century’s worth of both violent and nonviolent mass movements up against violent forces, political scientists Erica Chenoweth and Maria Stephan found that movements doubled their chance of success if they chose nonviolent struggle.

If Trump attempts a power grab in November, let’s double our chance of winning.

For more resources on resisting a stolen election visit ChooseDemocracy.us. You can also register for a training with George Lakey.