Nuclear weapons have been posing a threat to humanity for 75 years — ever since the U.S. bombings of Hiroshima and Nagasaki in August 1945.

These days, our focus is understandably on the COVID-19 virus and the threat it poses to human life. But as we commemorate the anniversary of these bombings, it is important to acknowledge that unlike the coronavirus, nuclear weapons can only be remediated with prevention. Millions of people could be killed if a single nuclear bomb were detonated over a large city, and the added threats of radiation and retaliation could endanger all life on Earth.

As political and socioeconomic instabilities grow, the risk of nuclear conflicts and even a global nuclear war is growing by the day. In fact, the world’s nuclear-armed countries spent a record $73 billion on their arsenal of weapons of mass destruction last year, almost half of that sum represented by the United States, followed by China. Mobilizing global action for the abolition of nuclear weapons — to safeguard health, justice and peace — is more important now than ever.

“When societies become more unstable, all forms of violence become more likely,” says Rick Wayman, CEO of the Nuclear Age Peace Foundation. “We, as individuals and as humanity, must overcome the root causes that have led to the past 75 years of nuclear weapons [development]. Absent this, we will continue to have national leaders that cling to nuclear weapons.”

The dangerous choice that is still being made by some government leaders of nuclear-armed nations has been threatening the world’s population for decades. But the global health threat presented by nuclear war can be stopped before it begins. And the way to do it is through the Treaty on the Prohibition of Nuclear Weapons, or TPNW, which has been the focal point of the International Campaign to Abolish Nuclear Weapons.

The road to nuclear disarmament

Today, nine countries possess nuclear weapons — the United States, China, the United Kingdom, Russia, France, India, Pakistan, Israel and North Korea — and it is estimated that they possess almost 15,000 nuclear warheads in total. Yet another report shows that 22 countries currently have one kilogram or more of weapons-usable nuclear materials, compared to 32 nations six years ago.

On July 7, 2017, the TPNW was adopted by the United Nations as a multilateral, legally-binding instrument for nuclear disarmament. However, the treaty will only enter into force and prohibit the development, testing and use of nuclear weapons worldwide once 50 nations have signed and ratified it. That’s what the International Campaign to Abolish Nuclear Weapons, or ICAN, is working hard to achieve.

ICAN is a coalition of non-governmental organizations in over 100 countries that won a Nobel Peace Prize in 2017 for its efforts to achieve a global nuclear weapons ban treaty. They have been working to raise public awareness about the catastrophic consequences of weapons of mass destruction, while persuading decision-makers and mobilizing citizens to pressure their governments to sign and ratify the TPNW — a treaty that they have managed to bring forward after years of advocacy meetings at the United Nations and in national parliaments.

Daniel Högsta, ICAN’s campaign coordinator, says the TPNW is “the most promising new vehicle for changing attitudes and the political status quo around nuclear weapons.” He adds that residents and leaders of cities and towns “have a special responsibility and obligation to speak out on this issue” for nuclear disarmament, given that these places are the main targets of nuclear attacks.

ICAN developed a Cities Appeal initiative and a #ICANSave online campaign, to encourage local authorities to lead the way in supporting the treaty, building momentum for national governments to sign and ratify it. This is usually done through council resolutions, official statement or press releases from municipal authorities communicating their support for the global ban treaty, sometimes including nuclear weapons divestment commitments.

“We have been very excited by the positive responses from cities all around the world,” Högsta said. “We have just surpassed 300 cities and towns that have joined [the ICAN appeal], which includes municipalities of all sizes, from huge metropolitan areas like Los Angeles, Berlin, Sydney, Paris and Toronto, to small but nevertheless committed towns.”

These steps are not only fast tracking the success of the TPNW, explains Högsta, but it is also challenging the assumption that local politicians cannot influence foreign policy decisions. In the United States, for example, many city leaders have joined the ICAN appeal and committed to divest public pension funds from nuclear weapons companies, although President Trump has not yet shown the same interest.

The cities of Hiroshima and Nagasaki were completely destroyed by the nuclear bombs dropped over Japan, which killed more than 200,000 people immediately and injured countless others. Those who survived suffered long-term health effects such as cancers and chronic diseases due to the exposure to radiation. Yet their story remains very much alive.

Some hibakusha people — survivors of the atomic bombings from 75 years ago — have partnered with ICAN to share their testimonies and make sure the world does not forget about the catastrophic consequences of nuclear conflicts. Setsuko Thurlow, one of the survivors and an anti-nuclear activist, has been sending letters to government leaders worldwide to encourage them to join the TPNW. She sent a letter to Donald Trump last month.

Doctors around the world have also been warning about the dreadful consequences of potential nuclear conflicts amid the coronavirus pandemic, given that health professionals and facilities are already overwhelmed. A recent study showed that a limited nuclear exchange between just two countries, like India and Pakistan, would be enough to cause a global disaster in food production and natural ecosystems. That’s why these weapons must not be used and countries should commit to banning them once and for all, before irreversible damage to humanity and the planet is done.

Fortunately, this is close to being achieved. Chuck Johnson, director of nuclear programs at the International Physicians for the Prevention of Nuclear War, ICAN’s founding organization, says that 82 nations have already signed the TPNW and 40 have ratified it. That means only 10 more ratifications are needed for the global ban treaty to enter into force.

The world has never been so close to abolishing nuclear weapons and there’s hope this may be achieved by the end of this year. After all, the pandemic is teaching government leaders about the need to put humanity at the center of security plans.

The role of peace education

The Nuclear Age Peace Foundation is a partner organization of the International Campaign to Abolish Nuclear Weapons. Yet their focus has been on training people in peace literacy.

Wayman says that to achieve a world free of nuclear weapons — and free of other serious problems such as wars, mass shootings, racism and sexism — we need to look at the root causes of why our society continues to embrace these forms of violence. And it all comes down to non-physical human needs, such as belonging, self-worth and transcendence. “If people can’t find healthy ways of fulfilling them, they will find unhealthy ways,” Wayman said. 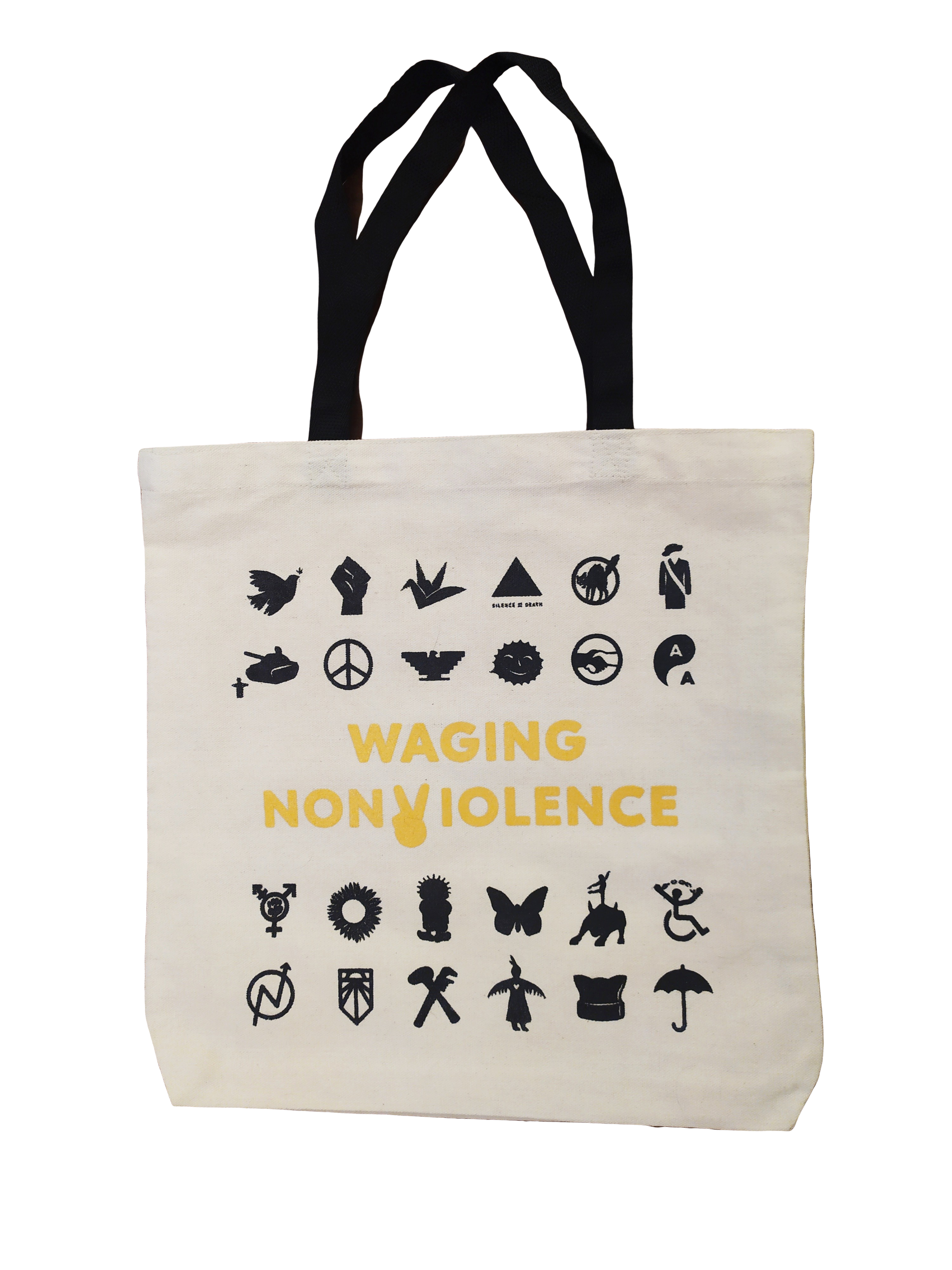 Like the movements we cover, Waging Nonviolence depends on grassroots support. Become a sustaining member today and get a WNV tote.

He believes that peace literacy can give people “the tools they need to recognize, address and heal the root causes of these serious problems plaguing societies around the world.” That is crucial because if people do not confront the root causes of violence and engage in healthy and peaceful relations with themselves and others, nuclear weapons may not be entirely abolished.

Take slavery for example. Most countries in the world passed laws to abolish slavery in the 19th or 20th centuries, but slavery-like working conditions and forced labor are still reported nowadays. That’s because racism and other unhealthy, violent forms of human relations have not ceased to exist and oftentimes are not discouraged by individuals, organizations or politicians.

Therefore, passing laws to ban nuclear weapons is an important step, but it is probably not enough to end this public health threat. Educating people, across all levels of society, about the importance of doing no harm and practicing nonviolence is fundamental for building a future where peace, not war, is the status quo.

Given the immense challenges our global society is facing today, especially in terms of health, it is time to mobilize for nuclear disarmament. As Setsuko Thurlow, a hibakusha, said in her letter to President Trump: “Every second of every day, nuclear weapons endanger everyone we love and everything we hold dear. Is it not yet the time for soul searching, critical thinking and positive action about the choices we make for human survival?”