After more than 40 years since the first UN conference on climate change in 1979 — and after more than 25 years of the UN Framework Convention on Climate Change — the world is still far from any serious climate action. Although carbon emissions keep rising, there has been a bend in the curve this year due to the COVID-19 pandemic. As a result, serious concerns about a major rebound remain, and China’s emissions have already rebounded beyond pre-COVID levels in May.

Due to the pandemic, the 26th UN Climate Change Conference, or COP26, in Glasgow — which was meant to be decisive for staying within the limit of 1.5 degrees Celsius temperature rise — was postponed to November 2021, marking climate inertia by the institutions supposedly created to save the climate. However, molecules don’t wait for institutional negotiations and climate change keeps accelerating. 2020 is on track to become one of the five hottest years in recent history, with a good chance of topping the list.

In late 2018, climate justice groups from Europe came together and formed the group By 2020 We Rise Up with the goal of closing the gap between the analysis of a climate emergency and “business as usual” by the climate movement. A concept of escalating waves of nonviolent direct action for climate justice was meant to increase the pressure for decisive action on climate prior to the COP26. While this was well on the way, the COVID-19 pandemic caused an abrupt slowdown to mobilizations.

The Glasgow Agreement is an initiative picking things up where By 2020 We Rise Up left off. It provides a framework for further strategic escalation of social movement action for climate justice. At the same time, by looking beyond COP26 (or even bypassing it), the agreement also takes on board the lessons from the collapse of mobilization after COP21 in Copenhagen in 2015. Yes, we need urgent climate action by our governments, but we know that even in the best case scenario COP26 (now in 2021) will be too little too late. Thus, to avoid a sense of failure and a subsequent collapse of mobilizations, the Glasgow Agreement aims to retake the initiative on climate action from governments and international institutions.

The exact text of the Glasgow Agreement is still being developed, but the key points are clear:

To implement the Glasgow Agreement, the signing organizations commit to produce national or regional inventories of climate polluters, which will inform a “climate agenda” for climate justice. These inventories will especially be relevant for the development of nonviolent action strategies for cutting emissions.

The Glasgow Agreement is not just another civil society statement on climate change. It is a “people’s climate commitment” to take decisive action to cut greenhouse gas emissions collectively and strategically. It creates a constitutional moment for the climate justice movement, rejecting empty declarations and assuming in a powerful way that the institutions’ impotence cannot become our movements’ impotence. 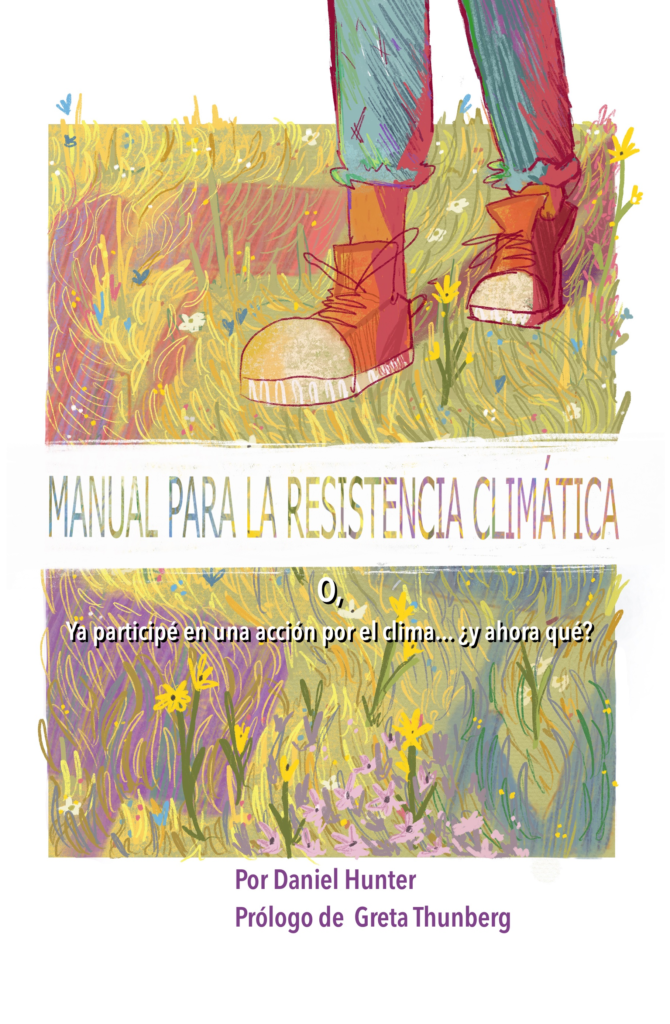 Waging Nonviolence depends on reader support. Become a sustaining member and receive this gift or another of your choosing!

The “climate agendas” for each region or nation will inform the political strategies of the climate justice movement — on the one hand targets for emission reduction, and on the other hand broader strategies for the transformation of our societies, including just transition. In this sense, the climate agendas will be broad political programs designed by the climate justice movement that take into account the need for a profound paradigm shift away from profit-oriented, extractivist, cisheteropatriarchal and colonialist capitalism, and towards an economy of care and justice within the ecological limits of our planet.

In the last decades, climate justice and anti-extractivist movements have gathered a wide range of experiences with nonviolent action, achieving important successes — mostly against new fossil fuel projects (such as fracking, pipelines, power stations and oil explorations) but also against existing projects. Additionally, new movements like Fridays for Future, Extinction Rebellion and the Sunrise Movement have recently emerged and helped shift the debate on climate, putting climate deniers on the defense. Boycott and divestment campaigns have created pressure on banks, pension funds and large investors to divest from fossil fuels. Talking about — or at least paying lip service to — a Green New Deal and the need to achieve net zero emissions by 2050 are now mainstream. Meanwhile, at least officially, European Union reconstruction after COVID-19 should follow a climate action framework, even though the reality is very different. What’s more, in the center of climate denial — the United States — public opinion has been shifting in favor of climate action.

While the health emergency caused by COVID-19 put climate action on the back burner for the last few months, the mobilizations in recent years are reasons for hope. Still, the gap between movement action and what is needed to keep climate change within the crucial 1.5 degrees Celsius limit remains huge, and is possibly widening as we approach a cascade of climate tipping points. The global climate justice movement needs a quantitative and — above all — qualitative jump if it wants to be up to the challenge.

Around 60 organizations from more than 20 countries are part of the process of creating the Glasgow Agreement… and it will need to grow to be successful.

The Glasgow Agreement does not pretend to build a new a unified movement, but rather to join movements together under a common framework and narrative, to increase impact. It also tries to take into account some of the lessons learned: not to focus almost exclusively on those in power (our governments and institutions), but rather on our own power as citizens and the need for a revival of democracy through “people power.” It also clearly focuses on changing power relationships, shifting power away from institutions, governments and multinational companies and toward the people — without falling into the neoliberal trap of focusing on individual conscience and action.

A cornerstone of the strategy will need to be civil disobedience and other forms of nonviolent direct action. In the absence of government action, civil disobedience will be used to shut down infrastructure contributing to climate change, thus directly achieving emission cuts. To be successful, this will need to be sustained civil disobedience over long periods of time, requiring major grassroots organizing. For some organizations, it might also require a shift from rather symbolic disobedience in city centers to direct action at infrastructure — like those who have engaged in fracking and pipeline protests or efforts to shut down coal mines and power stations.

The concrete strategies will be worked out nationally or regionally, as each context has its peculiarities. It will be important to look at experiences of momentum based organizing, and more generally of civil resistance and nonviolence studies, to avoid pitfalls. As Erica Chenoweth points out in a recent article in Journal of Democracy, “contemporary movements tend to over-rely on mass demonstrations while neglecting other techniques — such as general strikes and mass civil disobedience — that can more forcefully disrupt a regime’s stability. Because demonstrations and protests are what most people associate with civil resistance, those who seek change are increasingly launching these kinds of actions before they have developed real staying power or a strategy for transformation.” She also warns about an over-reliance on social media, as “the resulting movements are less equipped to channel their numbers into effective organizations that can plan, negotiate, establish shared goals, build on past victories and sustain their ability to disrupt a regime.”

The idea of the Glasgow Agreement is exactly that: to build and coordinate a movement of movements, to establish shared goals and targets in different parts of the world based on inventories created by the movements, and to build and sustain the ability to disrupt a global fossil fuel regime that leads to the destruction of our planet as we know it.

The challenges are huge. But the challenge that humanity is facing with climate change is even bigger and unprecedented. Without decisive action now, we face the prospect of destruction of our civilizations as we know them, not to mention the risk of extinction of the human race. Unprecedented and existential challenges require unprecedented responses.

How do we put in practice the perspectives of climate justice and intersectionality on a global scale? It seems clear that there is a need for a lot of learning.

Since the initiative was started in early 2020, one of the challenges has been to build a truly global Glasgow Agreement in times of COVID-19, when many organizations and people have other seemingly more existential and urgent priorities. Organizing has become difficult, with national, regional and local lockdowns. While many meetings took place online in the Global North, this was and is not necessarily an option for many countries in the Global South, where internet access is still a privilege. Right now, around 60 organizations from more than 20 countries are part of the process of creating the Glasgow Agreement, with notable gaps in Asia, the Pacific region and North America. So far, the Glasgow Agreement process is far from being sufficiently global, and it will need to grow to be successful.

Creating the inventories and climate agendas — as well as identifying clear targets and narratives that regional or national movements can unite around — will also be a challenge. How can we create a potent unified struggle based on the diversity of local contexts, problems and political cultures? How can we unite in diversity, but work with a common framework, narrative and objectives?

Even more importantly, perhaps: How can we act against climate polluters that are not easily “action-able” with civil disobedience? We need a profound paradigm shift; a system change; a change of our energy, food, production and consumption systems; of global and national power structures, or urban and rural planning; of the economical and social foundations of our society. We need all that while, at the same time, cutting greenhouse gas emissions.

How do we put in practice the perspectives of climate justice and intersectionality on a global scale? It seems clear that there is a need for a lot of learning, as our movements and our societies need to change.

The Glasgow Agreement will be launched between Nov. 12-16, during the People’s Summit, which is being organized online by the COP26 Coalition in Glasgow, Scotland. Beyond this global signing event, regional meetings and signing events around the same time will be crucial spaces to discuss regional strategies and coordination on how to implement the Glasgow Agreement in each region or country.

After the official launch, the regional climate justice movements will create their national inventories, which will feed into a global inventory, which will hopefully be a powerful tool and identify concrete infrastructures internationally to cut greenhouse gas emissions. These inventories will then lead to regional climate agendas, civil disobedience and nonviolent action strategies for emission cuts.

Andrea(s) Speck is a nonviolent activist and trainer who has been involved with anti nuclear energy, antimilitarist and queer movements in several countries. They are presently based in Seville, Spain, and are focusing on climate justice within the framework of By 2020 We Rise Up Spain/Portugal and the Glasgow Agreement.

In the face of assassinations and paramilitary terror, the Zapatista struggle for sovereignty continues

Imagining a world without policing