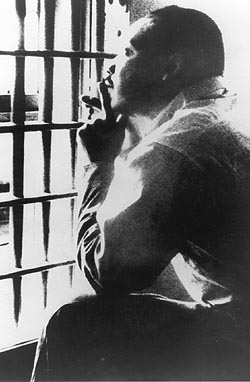 Last weekend 17 environmental activists were arrested in a series of protests against the coal industry in West Virginia. Most were given trespassing tickets and released, but six were slapped with a $2,000 cash only bail. The organizing groups–Coal River Mountain Watch, Climate Ground Zero and Mountain Justice–tried to persuade the judge to lower the amount. He refused, so they raised enough money to get two of their members released. The other four were forced to spend the weekend in jail. Afterward, at a press conference, some of the activists spoke about their arrest. Here’s what one of the two who made bail had to say:

“Family was real good for me,” he said. “My wife and grand-kids scraped up enough money to get me out. It’s wrong they charged us a $2,000 cash fine over a trespassing charge. Kind of silly to me but I was real glad to get out. I just feel sorry for the fellas who had to stay in there longer.”

As someone who has spent the better part of a weekend in jail, I can attest to the desire to want out. It’s not something that anyone, with even the purest of motives, can prepare themselves for. The fact that your fate is in the hands of some uncaring bureaucracy is nothing-short of a panic-inducing nightmare. And the thought did cross my mind to find some way of getting bailed out before my hearing. But thankfully I was with a group of civil disobedience veterans, who taught me that jail is as much a part of the process as the action itself. And furthermore, so is going to trial, something I unfortunately avoided by taking a stet agreement, but now regret, having seen the attention my friends were able to draw to their issue in court.

Of course, knowing all this hasn’t made the decision to risk arrest any easier. In fact I’m far more reticent now than before. But, in a way, it’s all for the better because if I do get arrested again sometime, I will be doing it with complete commitment to the cause and practice of nonviolence.

As King once said, “An individual who breaks a law that his conscience tells him is unjust, and who willingly accepts the penalty of imprisonment in order to arouse the conscience of the community over its injustice, is in reality expressing the highest respect for law.” Similarly, Gandhi warned that punishments may be harsh, but that “wisdom lies in pledging ourselves on the understanding that we shall have to suffer.”

I mention all this not to disparage last week’s urgently necessary and wholly admirable action, but to raise a question all of us interested in nonviolence have to consider, which is: Do we accept everything, the good and the bad, that comes with an action? If the answer is yes, then I think it can only make us and our movements stronger.

Reclaiming the nonviolent side of history

Should we seek bail?