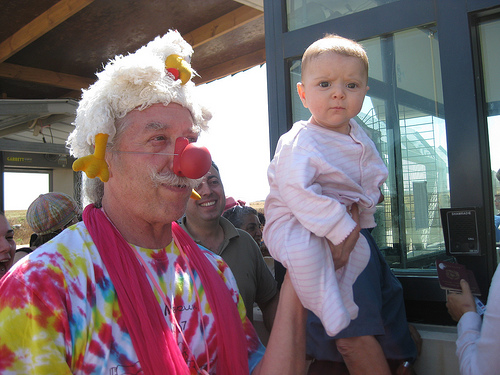 You had to see it to believe it: Hunter “Patch” Adams, MD, fully decked out in his clown outfit, and a retired Israeli military general standing together in an enormous pair of red silk underwear. Patch calls it his “underwear security,” a play upon “undercover security.” It’s an ingenious device which encourages egotistical disarmament. You can’t climb into Patch’s underwear if you are overly-defended.

“Being part of the fun” wasn’t a thought that occurred to me when I signed up for the CodePink humanitarian delegation to the Gaza Strip. Since our particular delegation was to enter Gaza by way of Israel, I suspected our chances of getting in were slim. Indeed we were denied permission and entry on three separate occasions. I had recently seen the pictures of Gaza taken by two previous CodePink delegations who had entered through Egypt. These pictures showed the massive destruction of homes, schools, ambulances, hospitals and factories. They also showed horrific human injury and death, not to mention the rotting carcasses of livestock and animals. So, what came to mind when I thought of Gaza was “death, destruction, starvation, crisis, etc.”

It was Nasser Ibrahim, the Director of the Palestinian-Israeli Alternative Information Center in Beit Sahour (West Bank) who provided a way for me to see the necessity of the work of clowning, with its love of joy and of fun, in the context of a disaster. According to Ibrahim, political resistance is an “effort to hold on to your humanity. It is the work of being human.”

Ibrahim’s insight certainly came to life during our three attempted crossings into Gaza. During our first attempt, we were joined by “Kassamba,” an Israeli anarchist band whose name roughly translates into “sound rockets,” and a troupe of clowns. Kassamba, Patch and the Israeli clowns had all of us dancing, laughing and smiling in an area that was filled with miles of fences, guard towers, military vehicles and M-16’s. When our passports were returned to us and our entry denied, Patch took the passports and started a game of poker with them just underneath the checkpoint booth, a move that had the Israeli guards looking on in amazement and amusement. When Patch reached out his hand to one of the guards, the guard reached back and clasped Patch’s hand with a strong grip. In this case, the hand that clasped the other had to first release his hand from a gun. “Score, humanity!” at least for this moment.

Our second and third efforts to cross were enriched by balloons, kites and flowers as well as by a three-hundred person strong demonstration by Gazans just across the crossing from us. Our kites and balloons embodied our soaring spirits and the desire to connect with the people of Gaza. Our flowers were placed in the fence of the Erez crossing along with handwritten notes. Prior to placing our notes in the fence, we were able to speak with a few of the Gazans who had made it through the crossing and who were on their way to the hospital. Be they elderly women or small children held by their mothers, the pallor of sickness was quite evident, particularly in the sweltering heat of the day. Most were suffering from heart ailments and were in need of serious medical attention. In order to get out of Gaza, where medical supplies are in short shrift and hospitals are barely functioning, they had to wade through an onerous bureaucratic permit process only to wait—if they were among the fortunate few—for hours before being allowed out. The festive atmosphere we had created in this desolate and inhuman space brought forth smiles and hugs from our Gazan friends. “Score, humanity! Once again.”

Though the gates to Gaza were not opened for us, the gates around my heart were opened. Far from being dispirited, I know that the roots of my peacemaking practice are stronger and more deeply rooted than ever before. Once again the words of Nasser Ibrahim came to mind: “Never give up!” I will not give up; I have only just begun.

The Keystone XL Pledge of Resistance takes off

A new movement for nonviolent change

Clowning Around in Israel