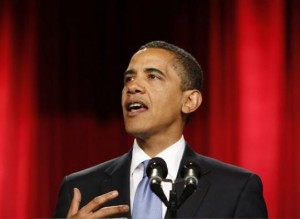 During his highly publicized speech in Cairo last week, President Obama urged Palestinians to use nonviolence in their struggle for independence.

Resistance through violence and killing is wrong and it does not succeed. For centuries, black people in America suffered the lash of the whip as slaves and the humiliation of segregation. But it was not violence that won full and equal rights. It was a peaceful and determined insistence upon the ideals at the center of America’s founding. This same story can be told by people from South Africa to South Asia; from Eastern Europe to Indonesia. It’s a story with a simple truth: that violence is a dead end. It is a sign neither of courage nor power to shoot rockets at sleeping children, or to blow up old women on a bus. That’s not how moral authority is claimed; that’s how it is surrendered.

Secretary of State Hillary Clinton called Obama’s nod to nonviolence “one of the most important points that he made.” But many others have had trouble sidestepping the hypocrisy of such words coming from the man in charge of the world’s greatest military power. As Starhawk, a panelist for the Washington Post‘s On Faith blog, pointed out:

For the powerful to demand that the less powerful renounce violence, without making the same demands on themselves or on their allies, is simply to say: “I reserve the weapons of death for myself and my friends.”

The obvious friend is of course Israel, which receives about $3 billion a year from Washington. Right behind them, interestingly enough, is the dictatorship in Egypt, which received $7.8 billion from the U.S. over the past five years. Making matters worse, the Obama administration is requesting a 60 percent cut in funding for pro-democracy groups and initiatives in the country. So even the location of Obama’s speech adds to the hypocrisy of his call for nonviolence, especially considering he made no direct reference to the dictatorship.

While the president may not have a leg to stand on when it comes to espousing nonviolence, he could have at least acknowledged efforts made by Muslims and Arabs to reach a peaceful reconciliation. For one, on the day of his speech in Cairo, CodePink delivered a letter to Obama from Hamas that called for a meeting “on the basis of mutual respect and without preconditions.”

Without mention of this most people are left to assume that Hamas, and by extension all Palestinians, know nothing but violence. As McClatchy Newspapers‘ Jerusalem Bureau Chief Dion Nissenbaum noted, there is “a question long raised in the Israeli-Palestinian conflict: Where is the Palestinian Mahatma Gandhi?” Nissenbaum then went on to describe the most recent exploration of that question–a rather comprehensive and insightful article in the Weekly Standard–and quote several leading theorists.

Huwaida Arraf, a founder of the International Solidarity Movement that organizes largely non-violent protests of Israeli actions in the West Bank, argues that there are “many Palestinian Gandhis” who have been killed by Israeli soldiers, including Bassem Abu Rahmeh, who was killed when he was hit in the chest by a tear gas cannister fired by an Israeli soldier.

Salil Tripathi of Forbes also touched on this idea, saying that Obama should have mentioned the nonviolent Muslim leader Khan Abdul Ghaffar Khan, who is known as the “Frontier Gandhi” for raising a nonviolent army of over 100,000 members in the Northwest Frontier between Afghanistan and Pakistan.

A sharper endorsement of non-violence, citing the many standard-bearers, including those from the region, could have planted the seed of an idea. And, maybe, the paradigm would have shifted.

There is still a chance that it may. But it is unlikely to be inspired by an American president.

How to counter the growing threat of agent provocateurs