In this video, Rainforest Action Network executive director Michael Brune hosts a fireside chat directed specifically at the wife of Royal Bank of Canada CEO Gordon Nixon. RBC is one of the leading financial supporters of the tar sands project in Alberta, widely regarded by environmentalists as the most destructive project on earth.

Brune explains that he is addressing Mrs. Nixon because RAN has been unable to grab her husband’s attention.

My colleagues and I distribute leaflets, maybe dangle banners off buildings and collaborate with RBC shareholders, but you, Janet, you’re obviously a lot closer. You have his ear. So please, Janet, tonight would you ask your husband to stop RBC from financing this horiffic project? 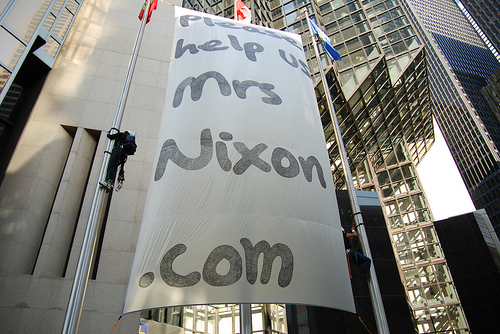 Accompanying this rather humorous video was a stunt at RBC headquarters in downtown Toronto yesterday, where two Indigenous Canadian women scaled flagpoles in front of the main entrance before dropping a banner that read: “Please Help Us Mrs Nixon.com.“

Janet Nixon is known to have played a key role in the development of RBC’s Blue Water Project, which is giving out $50 million over the next 10 years “to help foster a culture of water stewardship.”

While the clear issue involved with the tar sands oil extraction is global warming, RAN has been clever, given Mrs. Nixon’s interests, to stress the clean water implications as well. As Brune notes in the video, “It’s polluting Canada’s clean and precious water rescources.” More specifically, according to RAN’s website, “Indigenous First Nations communities downstream [from the tar sands project] have experienced polluted water, water reductions in rivers and aquifers, increased cancer, and declines in wildlife population that threaten to destroy their traditional ways of life.”

Although the banner dropping created quite a stir during the two hours it remained hoisted—drawing crowds of people, including RBC public relations executives—Mrs. Nixon has yet to issue a response. In fact, considering the video and the action were the culmination of a month-long guerrilla advertising campaign by RAN—which saw them plaster Toronto with posters calling on Mrs. Nixon to help—she’s actually been silent for quite a while.

It will be interesting to see how this plays out. Will Mrs. Nixon feel forced to make some sort of public effort to be consistent with her environmental beliefs? That’s certainly the hand RAN is forcing by being so determinedly earnest in their appeal.

If she doesn’t show an effort then it will reflect poorly on the Blue Water Project. If she does, but her husband fails to listen, then her perceived power and influence are weakened (hope you like the doghouse Mr. Nixon). That leaves the final option of RBC actually withdrawing support from the tar sands. Even if it’s only a small amount, I think RAN could call this campaign a victory.

No one expects a CEO’s wife to singlehandedly take down the biggest financial boon Canada has ever seen. But any concession on her or RBC’s part would help strengthen the stigma of being involved with the tar sands and thereby help future campaigns against supporters.

Turning the tide: inside a Texas city’s struggle to stop deportations

And here’s to you, Mrs. Nixon