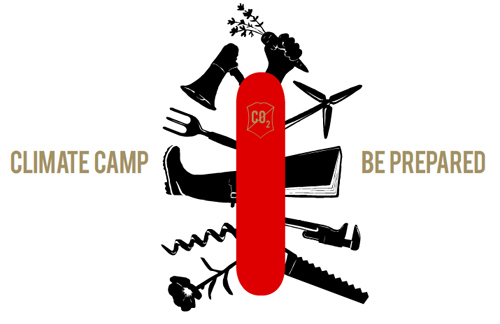 Organizers behind Britain’s Camp for Climate Action are looking to shed their image as “dangerous radicals” and move toward the mainstream. Fortunately, by the sound of it, they will do so not by abandoning their high-profile direct actions or by softening their tone, but by using more creative marketing and outreach efforts.

For instance, the public is being asked to vote on this year’s target of environmental protest and the winner will be announced at the end of August, during this year’s week-long eco-fest near London. The contestants are Drax Power Station, the UK’s single biggest emitter of carbon, and Ratcliffe-on-Soar Power Station, owned by energy giant E.ON. The tone of the website where people can vote takes on a reality/talent show theme, where each polluter gets to state its case for why it deserves to be protested.

Drax says: “I am a colossus of a carbon dinosaur, and proud of it. CCS? You must be joking mate, I don’t have any truck with this new fangled technology, won’t work anyway. I’ll smoke till I die, and I’ll take you all with me! Hahaha! Nah, only joking. Nah, not really. Ratcliffe. What a joke! Run by a bunch of bleeding heart liberals, if you ask me.”

Ratcliffe says: “To be honest, this attempt to paint Drax as the biggest carbon dinosaur, I feel a bit sorry for them. Sure they’re big, but E.ON – we’ve got reach, man! We talk to some pretty important people, you know what I mean? Across the world, we emit way more than Drax. In comparison Drax is, well, I don’t like to say, but a bit of a backwater yokel.”

While this may sound rather silly, if not a diversion, to some hardcore activists, Climate Camp is approaching this move with some trepidation. They realize what they’re attempting has a catch-22 aspect to it. Even if they manage to attract a mainstream audience, a good number will still be scared off by the intensity of direct action. And yet, as the Guardian recently pointed out, previous police crackdowns on Climate Camp protesters have gained them positive media attention and public sympathy.

It will be an interesting experiment to see if playing to the mainstream is more effective at capturing attention than simply letting the direct actions speak for themselves. My sense is that as long as Climate Camp remains true to its activist roots, any attempt to reach more people is a good thing. We certainly don’t need more middle-of-the-road environmental lobbying groups.

Brecher on using the law against climate goons