A couple of interesting political graphic novels drew attention in the New York Times this week. One is a reworked online version of the 2003 award-winning graphic novel Persepolis, while the other is an updated reincarnation of the old DC Comics superhero Unknown Soldier. Both raise some serious questions in regards to nonviolence. 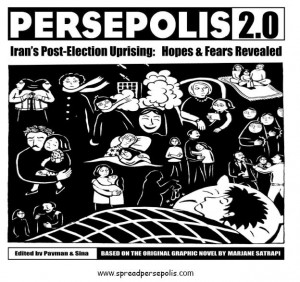 Persepolis 2.0, as it’s called, reshuffles the black and white drawings of the original book (which is about the 1979 Iranian Revolution) to tell the story of the mass protests that took place in Iran this year, following the disputed presidential elections. It’s an interesting concept given that the new authors (who have taken on pseudonyms) were able take images meant to depict events from 30 years ago and apply them to current events.

While it seems that much of the storyline focuses on the very legitimate protests against the repressive Ahmadinejad regime, there is also a major focus on the elections being rigged, despite there being no concrete evidence of this. Futhermore, Persepolis 2.0, does a good deal of propagandizing to make Moussavi out as the hero, when, as discussed on this blog, his corporate/upper class interests need to be challenged as well. Finally, Twitter and Facebook are referred to as providers of the “real info,” when in fact, though undeniably valuable, they have led to a great deal of misreporting and confusion.

All of this is not surprising, considering the authors, like most of us, “experienced the election and its aftermath from afar.” Much like Western media coverage of these events, which lacked on the ground reporting, their authority is rather suspect. While we all sympathize with and commend the bravery of the protesters fighting repression, there are still many questions about this so-called “Green Revolution” that need to be answered. 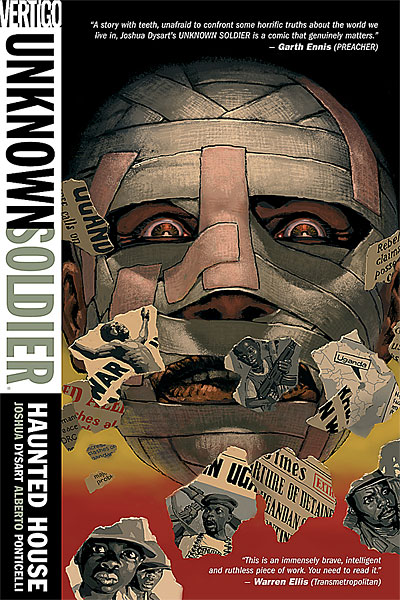 Unknown Soldier, which debuted as a monthly comic last December and is set to come out as a trade paperback next week, poses a deeper philosophical dilemma than the distoritions of Perseplis 2.0. Its main character is a pacifist Ugandan doctor, who suddenly hears voices in his head urging him toward violence after a confrontation with child soldiers. It turns out to be something he can’t contain in a country that’s experienced a gruesome civil war for 15 years. As series writer Joshua Dysart puts it, “though he starts as a pacifist, with each new atrocity, each horror witnessed, he begins to ask himself if in his place, his time, it isn’t best to just pull the trigger.”

Dysart describes himself as a “on-again, off-again pacifist,” who asked himself after a harrowing visit to Uganda in 2007, “Do certain situations in this world demand that violence fix? Demand the total devotion to the horror of war until the job is done?” He saw the Unknown Soldier as a great vehicle for exploring these questions, given the character’s history as a vengeful, patriotic, Nazi fighting machine.

If in the end Dysart comes down on the side of pacifism, it will be done so at the exploitation of violence, which as he notes, is the selling point of his book.

This is a commercial war book. It’d be dishonest to tell something that was more The Constant Gardener than Rambo. It’s high-intensity, hyper-gruesome action (with repercussions) comics.

Too often it seems our best lessons of “violence doesn’t solve anything” come after a dramatic and gruesome depiction of violence. Why can’t we show the failure of violence through the success of nonviolence? Why must it always be a negative to prove a positive? My hunch is that it stems from a lack of knowledge.

Nonviolence has successfully toppled some of the worst dictatorships and stifled Nazi forces in several European countries during WWII. But these stories are seldom told in popular media. If storytellers, such as Dysart, got them out to the masses, perhaps situations, such as the one in Uganda, could be preventable.