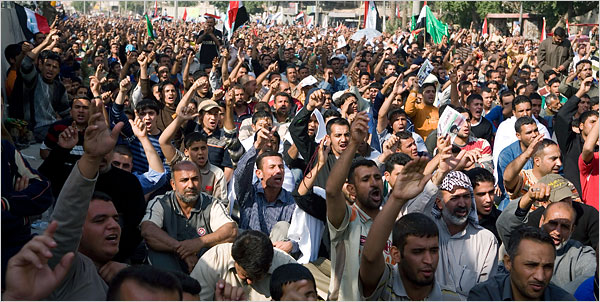 That was the question posed last week to Howard Zinn, Bernardine Dohrn and several others by Stephen Dubner on the New York Times’ Freakonomics blog. Their responses were affirmative and generally quite good, especially for those who are not already very knowledgeable on the subject.

Before giving a useful, but very brief recap of some of the different nonviolent social movements in our history that have concretely affected the direction of this country for the better, Howard Zinn makes an important point, especially for activists currently struggling to make our systems a little more humane:

Do protests work? Sometimes yes, sometimes no. Sometimes very soon, sometimes there is a long-term effect. Sometimes you can see a direct connection between the protest and the result, and sometimes it’s difficult to trace.

What this means is that you must not desist from protesting because you don’t see an immediate result. What immediately looks like a failure may turn out to be a success.

Bernardine Dohrn, a leader of the Weather Underground during the Vietnam War, who is now a clinical associate professor of law and director of the Children and Family Justice Center at Northwestern Law, makes a similar observation:

Looking backward, it seems obvious that sitting down to strike at Flint, and sitting in at Greensboro lunch counters, and standing up to enter school in Little Rock were obvious sparks to larger social movements. At the time, no one could know.

To conclude her thoughts, she then makes a crucial point about the necessity of creativity and perseverance that we have tried to emphasize on this blog:

Clearly comedy and humor open doors where earnest entreaty fails. And the art of Frida Kahlo, Diego Rivera, Audre Lourde, and Tony Kushner opens eyes and encourages the ethical longings of others. I don’t think we know what it takes for a walkout or teach-in or musical performance to simultaneously expose tyranny, enlighten, give heart, educate, recruit allies, and forge connections. So we have to act as we can, and then doubt whether we are fully right and effective, and then act again.

Only one part really jumped out at me as off the mark. Juan Mendez, a visiting professor at American University’s law school and an adviser on crime prevention to the prosecutor at the International Criminal Court, wrote that farmers in Argentina opposed to export taxes “had no right to block highways and impede the access of food products to the markets.”

I personally think that at times people are justified in using tactics (such as blockading roads or nonviolently occupying buildings or factories) that much more directly disrupt business as usual, particularly when the opponent proves resistant to milder nonviolent methods.

All in all, however, the quorum is definitely worth a read.

How much do protests matter?