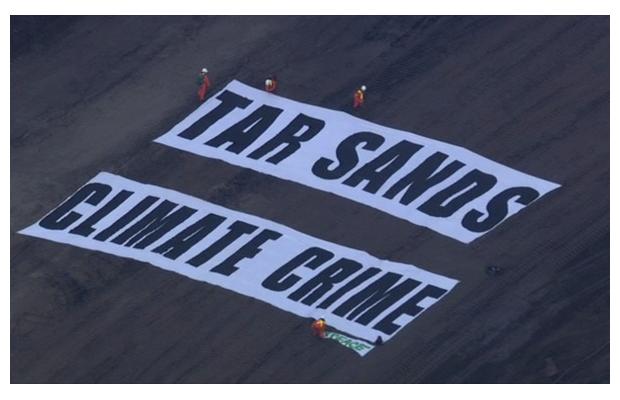 Was the Greenpeace action in Alberta, Canada that forced Royal Dutch Shell to suspend production at its oil sands mine for six hours earlier this week a success? The Vancouver Sun had some interesting quotes and comments that could convince you either way. On the plus side:

News of the Muskeg River protest leaked into global coverage of the Harper/Obama summit, with outlets such as MSNBC running stories on oilsands opposition.

Paul Joosse, a sociologist at the University of Alberta, said that kind of coverage may have been the goal of the Greenpeace protest all along.

“The interesting thing about this story is the strategy of communication Greenpeace uses,” he said in an e-mail. “First, they release their new report, then they conduct their action (complete with helicopter to produce great visuals) at the Shell site to draw attention to (it) ahead of Harper’s meetings in Washington. The measure of success for the protest is therefore whether or not they are able to penetrate these high-level discussions.”

On the down side, Shell played the situation rather coolly and may have escaped with few scratches to its image:

Paul Hagel, a spokesman for Shell, said the company agreed not to pursue charges, a move he doesn’t think will encourage future protests.

“We feel strongly that we want to get these reasonable critics to the table and explain our views,” he said. “We acknowledge the impact of climate change. So we come on an even foot with Greenpeace. And we thought that would be enough to sit down and listen to their views and have them listen to our views.”

In short, while Greenpeace got the press it wanted (always a good thing, considering there are still people unaware of the oil sands issue), Shell appears to have learned that it pays to play it calm. To the unsuspecting public, Shell might seem like a totally reasonable company, committed to hearing out its adversaries, and backing up its claim to environmental care. Does this mean Greenpeace should work harder to draw out the nastier reactions Shell is known for?

Why social change needs to be a laughing matter

Changing the world one ripple at a time

How we can commemorate Boston

Greenpeace vs. Shell: Who got the better press?