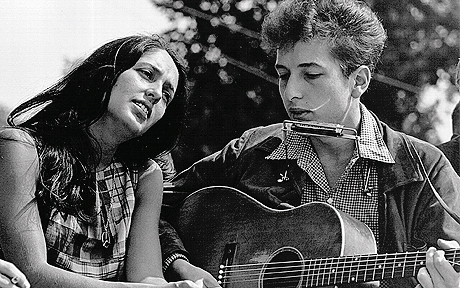 London’s Telegraph did a captivating profile of folk icon and activist Joan Baez earlier this week. One of the more interesting points that Baez addressed was Bob Dylan’s abandonment of the protest song after his early years:

For her part, Baez was smitten by Dylan’s anthems of protest and social change. ‘It was as if he was giving voice to the ideas I wanted to express, but didn’t know how,’ she would later recall. She began to include his songs in her own repertoire, and invited him to tour with her. They became lovers, and his fame blossomed under her patronage. But once people began anointing him the ‘king of protest’ he quickly declared his abdication, abandoning what he called the ‘finger-pointing songs’ and refusing to lend his name to any cause. The growing distance between her political convictions and his apparent lack of them would eventually become the fault-line dividing them.

In her 1989 autobiography, And a Voice to Sing With, Baez remembers once asking Dylan what was the difference between them; simple, he replied, she thought she could change things, and he knew that no one could.

So who, I ask her, does she think was right?

‘I would say we both were. Certainly for him, he’s right. But he’s not in the business of changing things. He never was. And that’s where my mistake was with him. I kept pushing him, wanting him to want to do that. Exhausting for him, and futile for me. Ridiculous. Until I finally put it together in my head that he had given us this artillery in his songs, and he didn’t really need to do anything aside from that. I mean, he may resent it, but he changed the world with his music.’

‘Well, just because he doesn’t want to think about that sort of thing. He doesn’t want the responsibility. On the other hand, I have enough intelligence to know I don’t understand him, and that’s why it’s so futile to keep talking about him.’

Although, I suppose I shouldn’t be surprised that Dylan is such a pessimist, given his rather withdrawn personality, it is nevertheless sad that he doesn’t see the power of his early work and lost that initial spark, which drove him to the spotlight.

Thankfully, we have Joan, who, perhaps more than anyone other than Pete Seeger, has used music to express a hope for peace and justice. And it’s no wonder why she still feels as though she can change the world:

Someone else asks her if she still considers herself a protest singer. ‘The foundation of my beliefs is the same as it was when I was 10,’ she says. ‘Non-violence.’ If there is something she can do, then she will do it, she tells me later.

Inequality is the real backstory to Sweden’s riots

What explains success or failure in the Arab Spring?

How organizers raised over $233,000 in one day to bail hundreds out of jail