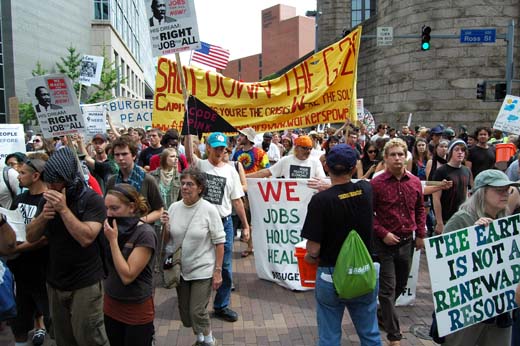 Over at Alternet, I have a new piece about Obama’s schizophrenic relationship to protest. Over the years, he has repeatedly pointed to Gandhi as an inspiration. And during Obama’s presidential campaign, he used the perhaps apocryphal story of FDR’s constructive relationship with the grassroots, to urge his supporters who wanted their progressive goals met to go out there and “make me do it.”

Nevertheless, on the eve of the G-20 summit last week, President Barack Obama told the Pittsburgh Post-Gazette that even during his days as a community organizer in Chicago he was never a big fan of mass protests.

With the clear intention of discouraging those who might join the looming demonstrations against the G-20, Obama explained that he was always a believer that “focusing on concrete, local, immediate issues that have an impact on people’s lives is what really makes a difference; and that having protests about abstractions [such] as global capitalism or something, generally is not really going to make much of a difference.”

I go on to argue that these comments were really disingenuous on Obama’s part for many reasons.

It would not have taken an incredible investigative feat to discover that the protesters descending upon Pittsburgh were doing so for very “concrete” reasons that touch their daily lives in very real ways.

They came to advocate for greater assistance for everyday people during these tough economic times, for more serious government action on global warming ahead of the U.N. climate talks in Copenhagen, Denmark, and for an end to the wars in Iraq and Afghanistan that have already taken such a staggering human and financial toll.

In fact, as a general rule of thumb, most people — whether they are diehard activists or not — don’t normally travel great distances to face ominous riot police firing rubber bullets, pepper spray and deafening sound cannons, unless they have been deeply, personally affected by the issues being protested.

Also, given the surge of right wing protests in recent months, Obama unfortunately missed an important opportunity to encourgage pressure from the left to help forward a more progressive legislative agenda.

Breaking the silence on rape within the military

How #NoDAPL united a movement for Indigenous rights

Obama is no FDR, much less Gandhi