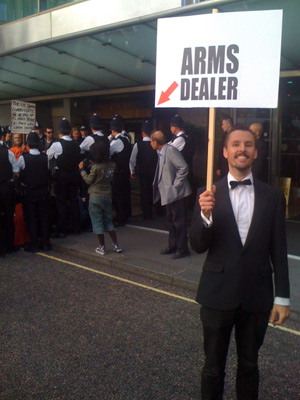 One anarchist group, called the Space Hijackers, claimed to have acquired a helicopter and threatened to somehow shut down the weapons bazaar “by swooping in from the sky,” according to Danger Room. While that sounds ridiculous, London police actually had a reason to take the group seriously.

At the DSEi in 2007, the Space Hijackers threatened to bring a tank and auction it outside the show. What ended up happening is really wonderful.

“The police intercepted a tank approaching the Excel exhibition site,” David Hambling reported at the time, “but this turned out to be a decoy and a second tank (pictured) got through.”

I would personally love to hear more about how in the hell they managed to pull off this stunt. Pretty hilarious. 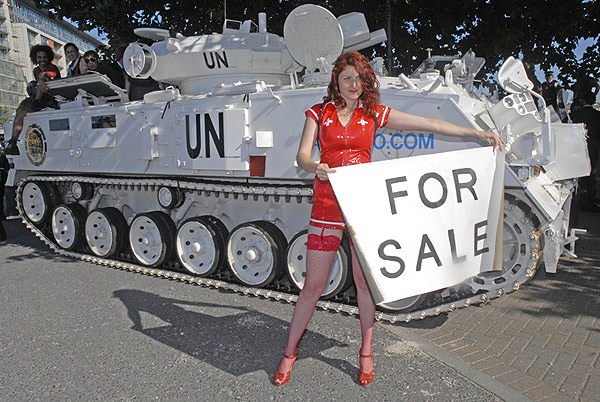 Well this year it turns out they didn’t actually have a helicopter, but they still managed to cause a stir. “It was VERY funny watching the police panic everytime one flew near the DSEi arms fair and Delegates Dinner,” the group says on their website. “Not to mention the extra helicopters they had flying around looking for ours.”

A full report on their involvement this year will be coming soon, so check back on their site if you want to know the full story.

While there were apparently peaceful protests during the arms fair, some unfortunately decided to turn to property destruction and vandalism. According to DISARM DSEi, the protesters’ main website, windows were smashed and paint bombs were thrown at “some of the biggest backers of the arms trade, including Barclays, Legal and General and Axa. British Telecom, who have a £59 million share in the arms trade were also occupied.”

Any damage caused pales into insignificance in comparison with the destruction UK weapons have caused worldwide. The only way to make these companies divest from the arms trade is to hit them economically, and today’s action is part of growing movement of direct action against the dealers in death and the money behind them.

Such logic in my opinion is seriously flawed. Not only will a little property damage not hurt these mammoth corporations economically, it actually does a real disservice by distracting the corporate media from the issue at hand to the rowdy behavior of the protesters. These companies that have blood on their hands are then wrongly portrayed as the victims. It’s not rocket science.

It may be argued that trying to get favorable coverage in the mainstream media is a lost cause anyway, but we shouldn’t provide them with such an easy way out.