I work in a field where violence is part of daily life. At the Coalition to Stop Gun Violence, my day will typically start with a run through the national headlines, where one can readily find gory details about the 30,000+ gun deaths that occur each year in the United States. If that doesn’t sufficiently dampen my spirit, I can easily scroll to the comment threads of these articles and see pro-gun activists minimize this loss of life and argue for even weaker gun laws.

It can be depressing—and also intimidating. Recently, I spoke to gun violence prevention activists in Virginia who were preparing to support their mayor at a city council meeting. You see, this mayor had the temerity to join a group called Mayors Against Illegal Guns and that outraged the Virginia Citizens Defense League (VCDL), who believe there should be no regulations concerning gun ownership. One other thing about VCDL: their members pack heat 24/7, including at city council meetings. Several well-meaning individuals concerned about gun violence felt compelled to stay home that evening after considering the prospect of facing 60 some-odd armed men at the meeting.

I really can’t blame them. I’m not scared of these guys myself (I’ve been around them long enough to think of them more as weird uncles, or the like), but what am I supposed to tell the mother of two young children who’s trying to be supportive and do the right thing? “Don’t worry about that guy with the Glock 40 and ‘Guns Save Lives’ decal on his jacket”? That would be a tough pitch even for Ricardo Montalban. 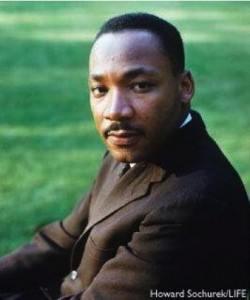 If one person can inspire the courage necessary to face such situations, however, it is Dr. Martin Luther King, Jr. I find myself repeatedly going back to a passage in his autobiography that is striking—and absolutely inspiring.

As we all know, Dr. King faced constant threats to his life during his time as a prominent civil rights leader in America, and was eventually felled by an assassin’s bullet in Memphis, Tennessee, on April 4, 1968. During his life, he wrestled often with the question of whether or not to carry a gun for self-defense. After his house and the house of a friend were bombed in 1956, Dr. King wrote the following:

After the bombings, many of the officers of my church and other trusted friends urged me to hire a bodyguard and armed watchmen for my house. When my father came to town, he concurred with both of these suggestions. I tried to tell them that I had no fears now and consequently needed no weapons for protection. This they would not hear. They insisted that I protect the house and family, even if I didn’t want to protect myself. In order to satisfy the wishes of these close friends and associates, I decided to consider the question of an armed guard. I went down to the sheriff’s office and applied for a license to carry a gun in the car; but this was refused.

Meanwhile I reconsidered. How could I serve as one of the leaders of a nonviolent movement and at the same time use weapons of violence for my personal protection? Coretta and I talked the matter over for several days and finally agreed that arms were no solution. We decided then to get rid of the one weapon we owned. We tried to satisfy our friends by having floodlights mounted around the house, and hiring unarmed watchmen around the clock. I also promised that I would not travel around the city alone.

I was much more afraid in Montgomery when I had a gun in my house. When I decided that I couldn’t keep a gun, I came face-to-face with the question of death and I dealt with it. From that point on, I no longer needed a gun nor have I been afraid. Had we become distracted by the question of my safety we would have lost the moral offensive and sunk to the level of our oppressors.

I think of these words often. Here was a man who had a wife and four young children, a man whose house had been bombed, a man whose phone rang incessantly with death threats (in a pre-caller ID era)—and yet King decided to disarm himself and his bodyguards. Furthermore, he felt safer after doing so.

Why? Did Dr. King realize that a man who arms himself and see his neighbors as potential enemies is more likely to find the trouble he is seeking to avoid? Or is the secret to King’s sense of peace that, in his own way, he was armed? “Nonviolence is a powerful and just weapon,” he wrote, “which cuts without wounding and ennobles the man who wields it. It is a sword that heals.”

Thinking of Dr. King’s example, I would feel shame to ever cower in the face of intimidation or frustration in seeking justice. And seeing how he continues to inspire generations that were born after he left this earth, I am more confident than ever that King’s peaceful path is the powerful and just weapon he described.

The tide turns from celebration to resistance, with Flood Wall Street

A powerful and just weapon