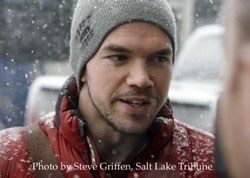 Mother Jones just posted an interview I did with Tim DeChristopher, the University of Utah student who last year interrupted a federal auction of oil and gas leases by pretending to be a bidder. Some interesting developments have occurred in his life over the last year, not the least of which was being indicted by a federal grand jury. With his trial nearing, I spoke to him about his plans to put global warming on trial, being influenced by The Yes Men, and his thoughts on climate activism. Click here to read that interview.

A few questions from our very long conversation, however, had to be cut. Since they mainly dealt with his passion for nonviolence and his new organization Peaceful Uprising, which aims to train people in nonviolent direct action, I thought they’d be perfect for posting on this blog. What follows, then, are the deleted scenes, so to speak, of my interview with Tim:

BF: How is Peaceful Uprising going? And can you explain when and how you plan to start training folks in nonviolence?
TD: We launched in January. The first thing we did was take 30 people out to Washington DC for capitol climate action. It was a very powerful experience for those people. Since then we’ve wavered a bit about what form of tactics we’re willing to accept and what kind of strategy we want to pursue as far as of working within the system or taking more civil disobedience type of actions. There’s been a mix of both. When the Waxman-Markey bill was being debated our congressman was a very influential on the energy and commerce committee and we put a lot of effort into working with him. And we lobbied him several times. And we started a phone tree and had people watching all the hearings and debates and things and every time he’d make a comment we’d have hundreds of people call in and respond to what he was saying. it was totally ineffective. After the second time he got hundreds of phone calls holding him accountable for what he had said that morning, he just went underground and didn’t show up for the rest of the hearing, the debate markup, or the floor debate, and instead just worked behind the scenes. So we were pretty much locked out of that process and I think that showed a lot of our members that we really were locked out of that system in a lot of ways and that we might have to start working outside that system. I think Copenhagen is going to do the rest of that if it isn’t a success and a lot of indications look like it’s not going to be a success. I think that’s going to drive a lot more ppl to direct action and cd side of things.

BF: Have you studied nonviolence?
TD: I studied a lot of social movements both those that use nonviolence and those that don’t and I’ve seen that usually the ones who have been most effective are those who have used nonviolence. As far as what’s most applicable to the environmental movement, the biggest example that I look at is the women’s suffrage movement. For decades it was trying to work within the system and had self demeaning arguments and were kind of begging for their rights. They did a lot of good work educating people and spreading ideas. People were becoming more open to them. But they never really made any progress for decades until Alice Paul came along and started leading them in direct actions and confrontational protests. Women marched on Washington and got arrested and beaten outside the White House. At that time it was extremely bold and extremely conformational for people to be marching on Washington, much less women marching on Washington. And with those confrontational tactics on the foundation of the education that had been there for decades they were able to make extremely rapid progress within just a few years and ended up with a constitutional amendment. I’d like to think that’s the point we’re at now with the environmental movement, where we’ve had decades of education about things and we’ve been raising awareness for so long and now is the point to really push those boundaries and make the push that we really need.

BF: Do you think climate activists need to consider taking riskier actions?
TD: I don’t think it’s necessarily a matter of having the courage to risk things, it’s more a matter of keeping it in perspective the cost of inaction verses the cost of action. The reason the United States has been more complacent as we’ve been marching toward our own destruction is that we’ve had a much greater emphasis over the last 50 years on this notion that happiness and security comes from the amount of stuff we have and from all these false source of security that come through our consumerism and this emphasis on what makes us happy is an easy and comfortable life and we’re going to risk that if we stand up and change things. We’re afraid of risking something that’s not actually making us happy. When I look at my action I don’t see it as something courageous, where I was overcoming fear. I was actually acting out of fear, it was just the fear of something much greater than going to prison for a few years. We have to accept that the scariest riskiest thing we can do is to just stay on the path that we’re on right now and once we accept that whatever risks or sacrifices we have to make to change things seem pretty easy to accept.

4 ways to hit the high notes of resistance

The anti-nuke strategy behind the ‘prophets of Oak Ridge’

An interview with Tim DeChristopher