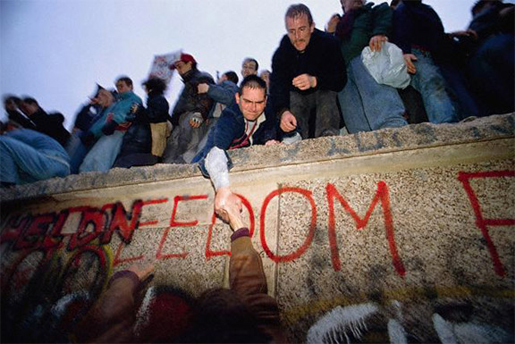 With the 20th anniversary of the fall of the Berlin Wall approaching on Monday, a surprisingly thoughtful article in Forbes Magazine of all places looks at who should really take credit for the collapse of the Soviet Union. Konrad Jarausch, a professor of European Civilization at the University of North Carolina in Chapel Hill, writes that the idea that Reagan simply spent the Soviets to death, as many Cold Warriors proclaim, is off the mark:

As Gorbachev’s memoirs show, this explanation is at best a half-truth. To be sure, the arms race was one of the reasons why the Russian leader decided that the Soviet Union had to reform its stagnating economy. But ultimately it was the spread of détente, helped by his personal rapport with the U.S. president that allowed Gorbachev to suspend the Brezhnev doctrine and set the satellites free to pursue–in the words of Frank Sinatra’s song “I Did It My Way”–their own road to communism.

Jarausch then even challenges the idea that it should be looked at  as the victory of the capitalist system over socialism. There is something to that argument, he says, but we must not forget that it was:

…the difficult transition from the plan to the market that threw one-fifth of the population out of work reaffirmed the importance of a functioning social safety net. And the recent financial meltdown has shown to all but the most greedy investment banker that unrestrained competition can be as dangerous as the almighty plan. Put off by destructive potential of casino-capitalism, most East Europeans today prefer the German compromise of a social market economy.

An explanation that “comes closer to the truth,” Jarausch writes, is:

…that of freedom as the prime motive of the democratic awakening in Eastern Europe. Many of the banners during mass demonstrations called for an end to dictatorship, the restoration of civil rights or the chance to travel without restraint. But a thirst for freedom alone can not overthrow a dictatorship unless it is translated into concrete action. It took a transnational grass roots movement of courageous Polish workers, Hungarian activists, German refugees and Czech dissidents braving considerable risks in order to revive civil society and regain space for public protest. In contrast to a widely held cliché, the communist dictatorship did not collapse of its own accord–rather it had to be pushed by mass demonstrations in order to agree on free elections and the return of democracy.

The fall of the Wall was magical because it signaled the peaceful triumph of people’s power over a regime that commanded enormous repressive force. Unlike the Revolutionary War in America, the terror during the French Revolution or the bloodshed during the Bolshevik seizure of power, it was nonviolent civil resistance that brought down the ugly concrete barrier that had imprisoned East Germans and East Europeans since August 1961. Keeping the process peaceful took extraordinary restraint by the dissidents inspired by the peace movement, by the frustrated people who wanted to vent their anger, by the communist rulers tempted to let the tanks roll, and by the international leaders who preferred the bipolar stability of the Cold War. That the rebels–save for those in Romania–remained peaceful, that the communist dictators were willing to give in to the popular pressure, that both sides agreed to negotiate at the Round Table, that the citizens repudiated communism in the first free elections and that the international community actually accepted their choice–all this still seems quite miraculous.

While this understanding of the collapse of the Soviet Union isn’t new to those who study nonviolence, this article is a reminder that there is still an important battle over the narrative of that historic event. As this anniversary approaches, we should all take the time to talk with others about how it was the people themselves in Eastern Europe, who courageously took to the streets and harnessed the power of nonviolence, that won the day twenty years ago.

Who brought down the Berlin Wall?