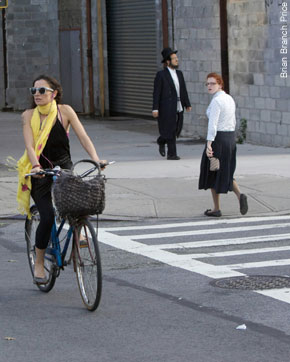 Bicyclists in Brooklyn were upset when Mayor Bloomberg recently closed a bike lane in Williamsburg over purported safety concerns. But they were even more upset when rumors started circulating that it had more to do with the neighborhood’s ultra-Orthodox Jewish residents, who complained of seeing too many scantily-clad female bikers.

To protest this decision, Brooklyn bicyclists planned what they called a “Freedom Ride”, or, more accurately, a topless ride. But when the day came, temperatures were too low to go without some sort of insulation. So many of the bikers pinned fake breasts over their clothes.

Haaretz reported on the event:

The bike lane battle is pitting Hasids against hipsters and, in some cases, Jew against Jew.

Those who say safety is the main reason for doing away with the lane “are lying,” says Herzfeld, who was born a Satmar but says certain practices should be abolished.

“The mayor made a deal with religious fanatics trying to enforce old traditions that don’t belong in the 21st century,” he said.

Our own Nathan Schneider also covered the protest over at Religion Dispatches:

It was sponsored by Candy Rain, “a lifestyle magazine for women that love d**ks,” according to Calisha Jenkins, who works for the magazine. She said in an interview while riding her bike, “They’re essentially moving it because they don’t want to look at girls dressed like sluts. And I want to dress like a slut.” Lead organizer Heather Loop, a 27-year-old bicycle messenger with a purple fixed-gear and a septum ring, added, “I feel like they’re forcing their beliefs on us. It’s in the Bill of Rights to not force your religion on anybody.”

The evening’s weather turned out to be especially hostile, with a snowstorm already underway, so all the cyclists remained fully clothed. Of the 40 or so present, at least half were journalists, disappointed to miss the prime photo-op of more-than-half-naked hipsters and bewildered Hasidim. Many rode with the activists as part-participant, part-observer. Trailing them, with lights flashing, was a police car and a van full of officers at the ready.

Having lived in Williamsburg, I can attest to the tension that exists between the Hasidic community and other residents of the neighborhood. It’s somewhat predictable, if not understandable. The Hasidic community live very separately and tend not to interact with anyone who is not Hasidic, unless it’s for business. Meanwhile, the young hipster population has very little patience for any kind of conservative religious behavior.

While hipsters would like to perceive themselves as liberal and tolerant of all cultures, their decision to protest in a way that effectively shoves the very thing Hasidic people find offensive ever further in their faces is ironically fascistic in its attitude. It would be so much more effective to win over the Hasidic community and target the city instead.

Rather than go to the extreme of riding topless, cyclists could meet with Hasidic people and show themselves as respectful neighbors who want to hear their complaints. Perhaps some kind of understanding could be met. Perhaps not. But the simple act of neighborly outreach could go a long way.

Nathan, in an essay on the controversy at The Huffington Post, suggested ways of doing so:

The city has added hundreds of miles of bike lanes in recent years, and bicycle commuting has more than doubled since 2000 as a result. I see new lanes being added all the time and feel grateful every time I do. Each one lowers my chances of getting whacked by a taxi.

As the city finally starts investing in keeping us safe, it is time for cyclists to do our part. “There is not a single community board meeting about bike lanes where cyclist behavior is not an issue,” says Wiley Norvell of Transportation Alternatives. His organization has launched Biking Rules!—a program to encourage more responsible riding in New York City.

The rules are simple and, from now on, I’m going to do my best to follow them: Pedestrians come first. Stop at red lights, and don’t ride against traffic. Obey the laws. Wear a helmet, and use a light in the dark.

More importantly, however, the cyclists should go after Bloomberg, who seemingly cares about New York’s image as a clean and sustainable city. Given the climate crisis, it is completely unacceptable for a mayor to discourage biking.

It’s just sad when the petty differences and the lack of nonviolent protest tactics allows the real culprits to go unnoticed.

Lesson plan: ‘Inoculating our children against fear and hatred’