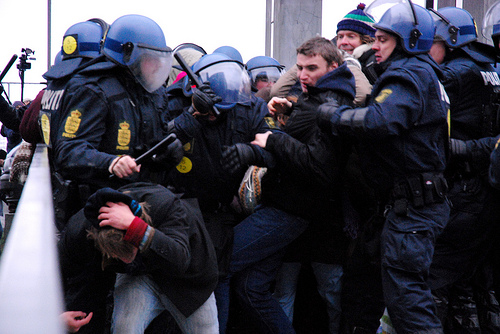 Rising Tide North America has created a new website that assembles “images, reports, videos, and education resources” from the UN Climate Conference in Denmark as a tribute to the thousands of activists who came to Copenhagen in support of climate justice. While www.WhatIsCop15.net seems like a great idea, it sounds like the intentions of the site might be a little too celebratory. In a post for the youth activist blog It’s Getting Hot In Here, Rising Tide organizer Cascadia Brian wrote:

Much has been said about the failure and collapse of the climate of COP15 last weekend to reach a binding agreement, and you’ll find lots of analysis at www.WhatIsCop15.net.

But the real story from the climate summit — which at best was expected expand the carbon market and entrench corporate control of climate policy — is a happy one.

It’s the massive organizing success and coming of age of the climate justice movement. 100,000 in the streets, tens of thousands in attendance at the climate justice oriented Klimaforum, and countless actions against the root causes of climate change.

While we certainly shouldn’t belittle the efforts of the thousands who traveled to Copenhagen and put their freedom and safety on the line to protest the inaction of world leaders, I’m not sure we should celebrate either. With as little time as there is to prevent catastrophic climate change, activists should be analyzing their efforts in Copenhagen to figure out what went wrong and how to improve.

It seems like far too many of the exciting actions planned to disrupt the UN meetings were foiled by a massive police crackdown. For instance, the Bike Bloc, which we wrote about, was broken up by police before it ever formed. The UK group Camp for Climate Action, which organized the action, never even updated its blog to reflect upon what happened.

More than anything, activists need to examine the movement’s failure to anticipate the police crackdown or deal with it in a way that benefited the movement. Ideally the footage of nonviolent protesters getting beaten by police would have gotten some mainstream press attention. But, as should have been expected, they instead focused on the small and scattered acts of vandalism committed by a few misguided anarchists.

All of this isn’t to say that activists shouldn’t draw attention to the injustices perpetrated by law enforcement or the media, but these institutions act in predictable patterns. It’s time climate activists put as much thought into self-analysis as they do into their creative protests.

Unveiling the prophets of profit in St. Louis