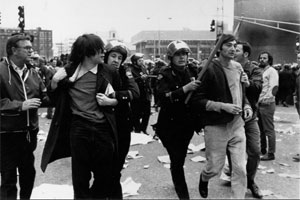 On what should be a sad occasion, I’ve found myself uplifted by the many great remembrances floating around the internet of Howard Zinn’s long and productive life. They serve as a reminder that a life well lived is to be celebrated, not mourned. His single greatest accomplishment was not writing A People’s History, but living an active life worthy of inclusion in such a book. He stands as an equal among the American heroes he wrote about for his organizing and speaking out against the Vietnam War, which, on one occasion, as Daniel Ellsberg recalled, led to him being beaten and arrested by police.

I was fortunate enough to have my own interaction with Zinn a few years ago. I was in the midst of discovering the power of nonviolent social movements and had come across his famous article “A Just Cause, Not A Just War,” published a few months after Sept. 11. Being somewhat blinded by my own passions and interests, I seized not upon his wonderful message that war is inherently unjust and must cease no matter the cause, but on this one little statement:

There might be situations (and even such strong pacifists as Gandhi and Martin Luther King believed this) when a small, focused act of violence against a monstrous, immediate evil would be justified.

It struck me as an unfortunate disclaimer from a man I wholly admired, in an article I otherwise loved. Furthermore, I was not aware of any justification for violence given by Gandhi or King. So I wrote him and asked for an explanation. To my surprise, he wrote back:

I was wrong about Gandhi and King. I thought I had remembered statements by them, but when I searched for those statements they were not there.

I agree that when you open the door even an inch to violence you are in danger of that door being pushed open more and more. I guess I’m trying to account for situations like the one in Rwanda in the 1990s, when a small show of force by the U.N.might have saved hundreds of thousands of lives. Or where simply the arrival of U.S. troops in Haiti was sufficient to overthrow military rule and restore the democratically elected Aristede to the presidency. Or my own experience, in 1963 on the Selma to Montgomery march, where the simple presence of U.S. soldiers protecting the march deterred racist violence against the marchers. This is a morally awkward issue, and I am not confident I have resolved it satisfactorily.

I wrote back and thanked him, but pressed a little further, asking what he thought of Tolstoy’s argument for complete nonviolence: “A moderate perfection loses its power of influencing men’s hearts.” Again, to my surprise, he answered:

I’m with Tolstoy. Even if rare circumstances pull us away momentarily from our ideal, we must hold on fast to it. Without it, we become victims of temptations which in the long run turn out to be delusions.

Hearing this satisfied me to no end. As new as I was to the philosophy of nonviolence, I was totally captivated by it and like any new discovery wanted to believe it was the answer I’d been looking for to life’s most difficult questions. Underneath that desire, however, was the fragility that comes with being young and naive. All it might have taken to burst my bubble was a discouraging remark or dismissal from a personal hero like Zinn. But he gave me credit for my remarks and even allowed my questions to challenge him.

In the years since this conversation, I’ve studied far more Gandhi and King and have come across passages and quotes of theirs that might lead someone to say that they left the door open to violence. But those passages are obscure and oftentimes contradictory with other things they said. Like Zinn’s 9/11 article, the important thing to note is that their one dominant and continual message is one of peace and nonviolence.

Complete and total nonviolence is a philosophy to be wrestled with, but never discouraged. I will always be grateful for the confidence boost Zinn gave me, along with the example of living out your own words.

Should we shield kids from a violent world?

Actions across Latin America target the notorious School of the Americas

Holding fast to ideals: my conversation with Howard Zinn