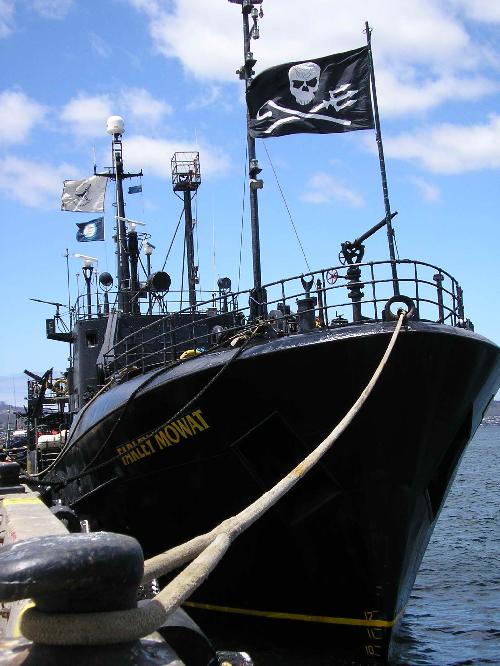 A New Yorker interview with Paul Watson of the Sea Shepherd Conservation Society, revealed that anti-whaling protesters have acquired the same type of non-lethal weapons used against them by Japanese whalers:

KHATCHADOURIAN: LRADs are non-lethal weapons that have been used to disperse protesters, by soldiers in Iraq, and by ships trying to ward off pirates. They project high-decibel audio waves at their targets. Will you be getting one, too?

WATSON: We have one. We just have not used it—yet.

KHATCHADOURIAN: What gadgetry are you using?

WATSON: We have photonic disrupters to disorient the harpooners. They are lasers designed not to cause damage, but to blind temporarily, like flashbulbs. We have a few other tricks we have not used yet, and we continue to hit them with our non-toxic, biodegradable, organic stink bombs.

Last week, I asked if the Sea Shepherd’s aggressive anti-whaling tactics, which are known to include property damage, could still be considered nonviolent. But this new information about their non-lethal arms cache makes their position on violence rather clear and raises many new questions as well.

For starters, how can activist groups—even well-funded ones like the Sea Shepherd—really expect to beat a government subsidized industry like the Japanese whaling industry at its own violent game?

The New Yorker thinks, “At some point, if confrontations like the one that destroyed the Ady Gil persist, people in Japan will likely start asking: Should an organization supported by taxpayers not behave better than to smash through another ship on the high seas, nearly killing people in the process?”

That may be true, but how many more near death collisions, for both the Sea Shepherd and whaling vessels, will that take? Also, what happens when the whalers decide to use even more destructive weapons against the protesters? By agreeing to play by the whalers’ rules, the escalation of violent tactics seems inevitable.

Finally, will the Sea Shephard’s actions influence other protest groups? Danger Room, Wired magazine’s blog on the defense industry, seems to think it may:

The Sea Shepherd arsenal of acoustic, laser, malodorant and line-carrying devices is an impressive one. They seem to be in the process of developing new tactics and techniques for stopping whalers without shooting anyone or threatening lethal force. This is an unexpected new angle on non-lethals; historically they have been used against protesters, but now it seems the protesters are finding their own uses for them.

The phrase “without shooting anyone or threatening lethal force” is the same empty promise used by the military and police to tout the so-called benevolence of these weapons. People have died from non-lethal weapons (e.g. the taser) and anyone who’s seen the 60 minutes special on non-lethal weapons understands how they can be used as a tool of oppression.

We’ve previously criticized the idea of wearing armor to protect against non-lethal weapons because it hinders the effectiveness of a nonviolent campaign when protesters are seen as combat-ready. But actually taking up arms? That takes things to a whole new level—one that would likely result in the destruction of a protest movement.

The untold, real-life story of the prison in ‘Orange is the New Black’

For Black Lives Matter protesters, there are no days off