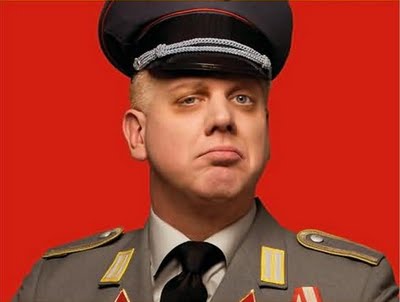 Apparently Glenn Beck has taken a fancy to nonviolence. According to the Philadelphia Inquirer he recently made “a metaphoric plea for a Gandhi-and-Martin-Luther-King-inspired nonviolent resistance to what he claims is the government’s march toward socialism.”

“Get God on your side, and then pick up a hammer,” Beck said Saturday at a tent-revival-meets-politics rally that nearly packed the University of Central Florida basketball arena. Quoting Gandhi, he took the hammer to an anvil onstage and said: “With nonviolence, take your hammer and pound that truth every day, and everything that doesn’t fit, toss it out! We have the truth . . . With nonviolence, be the anvil of truth every single day!”

The Orlando rally was the first of at least two heavily promoted, daylong American Revival events featuring the TV-and-radio star and some of his favorite pundits, designed to answer a question that might have seemed ludicrous just a year ago but which on Saturday attracted followers from up and down the Eastern Seaboard, including the Philadelphia region:

Now that Glenn Beck has captured everyone’s attention, just where exactly is he trying to take America, anyway?

Beck plans to slowly roll out the answer over the course of 2010. He’ll be publishing a not-surprisingly apocalyptic political thriller this spring, hosting an audacious rally at the foot of the Lincoln Memorial in late August – on the 47th anniversary of King’s “I Have a Dream” speech there – and has claimed he’ll release another book right before the fall elections with a 100-year plan for reviving America.

Of course the one major thing stopping Beck from being the next great nonviolent leader is the very “anvil of truth” he references. If we were to follow what Gandhi said and reject “anything that does not stand the test when it is brought to the anvil of truth and hammered with nonviolence” we would have to reject most of what Beck says because to be truly nonviolent you must have a just cause. Most of Beck’s rhetoric is based on lies (calling Obama a socialist and likening him to Hitler), as well as a violent agenda (opposing health care and other would-be social services that save lives).

It is interesting, though, that he chose to promote nonviolence. Perhaps he realizes its power of persuasion and the legitimacy it tends to give to a particular movement. Unfortuantely he has yet to realize his ideaology doesn’t fit with nonviolence. You can’t tell people to be nonviolent at the same time you tell them the apocalpyse is coming and that they’d better “stockpile food.”

Watch out for that anvil, Glenn.

How can nations best prepare to face a pandemic or climate crisis?

The miracle of the first nuclear test ban

Glenn Beck wants to take up the hammer of nonviolence