Having grown up in the Washington, D.C. area, I watched as the “war on terror” turned the streets of D.C.’s federal district into a maze of barricades, permanently parked police cars, and inexplicable no-go zones. It may be government by the people and for the people, but the people can’t get anywhere near.

I’m also a bicyclist, raised to idolize the city’s fearless bike couriers. I’ve put my bike and my body in those streets, removing one more murderous car from the congestion and a few more pounds of CO2 from the air. In return, in the name of order and hurry, I’ve been pulled over by cops and hit from behind by an impatient taxi. Security means insecurity. Transporting myself sanely means risking my life. 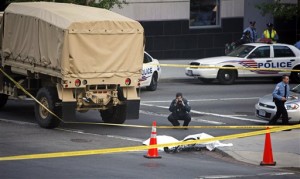 At 3QuarksDaily, a powerful essay by Sam Kean tells of the death of an elderly woman, a writer on a harmless bicycle, in a collision with a large military truck supposedly providing security for a diplomatic summit.

[T]he Nuclear Summit security situation showed that mentality isn’t just silly—it actually causes danger, it actually introduces hazards. Again, heads of state obviously need some protection, like bodyguards; but it was just as obvious to anyone who tried to get within a mile of the Convention Center last month that security had spilled over into paranoia. To the point that military personnel were so worried about getting their trucks into the proper place that they crushed a 68-year-old woman on a bicycle five blocks from the nearest point you could have spit on the Convention Center.

Read the rest at 3quarksdaily.

Standing together to stand alone

Writing my book of gratitude