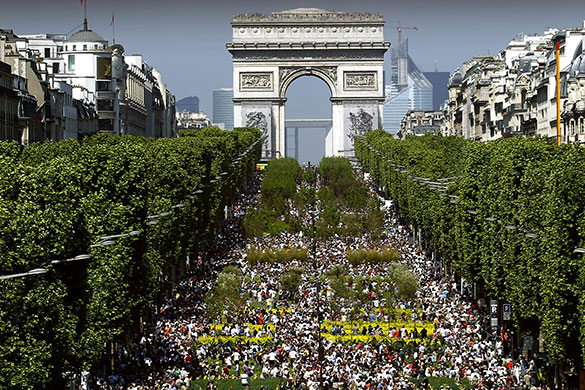 The French Young Farmers (Jeunes Agriculteurs) union turned Paris’ Champs Elysées into a giant farm on Sunday by covering the capital’s busiest road with 8,000 plots of earth, 150,000 plants and 700 fully grown trees, as well as pigs, cows, horses and sheep. According to the BBC:

The union, which represents some 55,000 farmers under the age of 35, wants to impress on the public – and the government – the efforts required to produce what goes on the table.

“It’s about re-establishing contact with the public about what our profession is and what they want from it,” William Villeneuve, president of the Jeunes Agriculteurs, said on Friday.

For the Parisians who last year witnessed farmers blocking traffic and setting fire to piles of hay and tires on the Champs Elysées, this bucolic sight is no doubt a welcome approach to one of France’s most enduring issues. At the same time, however, it cost 4.2m euros to stage. But that isn’t stopping the organizers from promising to take their concept overseas.

“We want to take “Nature Capitale” to New York (to work with) the farmers and woodmen of New York state, to Istanbul with their farmers, Berlin and other cities who want to welcome us,” Gad Weil, who created the concept, told France Info radio.

Despite the cost, there certainly is a lot to be said for raising awareness among city folk about the food process. It will be interesting to see if the reaction in Paris justifies its expense and whether such an undertaking can be replicated in other parts of the world.

When you have an AR-15 but want a garden hoe