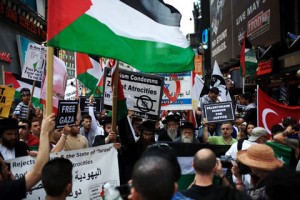 Despite the rain, around 2,000 demonstrators gathered in Midtown Manhattan on Tuesday to march in protest of Israel’s May 31st attack on the Gaza Freedom Flotilla. Only 5 days prior, many of these same activists gathered on this same city block in a significantly smaller demonstration in support of the embarking 6-ship convoy, which carried over 600 international activists and 10,000 tons of aid meant for the besieged residents of Gaza. This latest, much larger protest is one of many actions against the illegal attack across the globe, from Malaysia to Beirut to Sweden.

Showing up in force were hundreds of veteran Palestinian-rights activists representing numerous organizations, including Jews Say No, the Palestinian right-to-return coalition Al-Awda, and the orthodox Anti-Zionist group Neturei Karta. But, as the large turnout suggests, there was something different about these latest protests.

Michael, who stopped by the demonstration after work, is not an experienced activist; he is one of a growing number of conscientious citizens pushed to speak up and take action by Israel’s increasingly brutal and illegitimate aggression. Echoing the words of many attendees, Michael said, “This, for me, was a boiling point.”

As protesters made their way down 42nd Street towards Times Square, where the gathering wrapped up, they expressed dismay and frustration over Israel’s attack on the flotilla, as well as over the ongoing siege of Gaza, which necessitated the flotilla’s mission. Sarah Wellington, with the Activist Response Team, said, “I’m here because we need to stand up and speak out against Israel shamelessly murdering people.” She handed out signs reading “Israel attacks again” and “Stop the Israeli blockade.”

Condemnation of the United States and its policy of unconditional support for Israel was equally prevalent. Dana Balicki, an organizer with the peace group Code Pink, called the U.S. response “abhorrent.” Signs and chants demanded an end to U.S. military aid to Israel, which amounted to at least $7 million each day during Fiscal Year 2009, and urged President Obama to hold Israel accountable for its intransigence.

Activist Debra Sweet said she felt that Americans have a particular responsibility to hold their government accountable since the U.S. provides Israel with such enormous funding. Code Pink’s Balicki stressed the need to put pressure on the Obama administration to stop letting Israel get away with continued indefensible violence against civilians. As more Americans wake up and speak out, Obama is bound to feel the pressure.

“There will be more protests,” Balicki promised. “Operation Cast Lead was a tipping point for a lot of Americans, this is another.”

Shannon Hughes is a New York City-based student studying journalism at Hunter College, where she is the president of the Campus Anti-War Network. Shannon is involved in activism locally and abroad, including in Egypt and Palestine.

8 skills of a well-trained activist

New Yorkers support the Freedom Flotilla in the streets