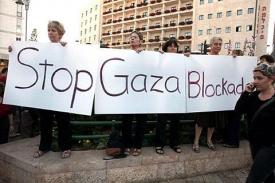 The recent killing of at least nine activists aboard the Free Gaza boats by Israeli commandos and the international outcry that has followed have drawn unprecedented attention to the draconian blockade of Gaza.  But will it lead to any tangible change in Israeli policy?

Government leaders around the world have strongly condemned the Israeli assault and are now openly calling for an end to blockade. U.N. Secretary-General Ban Ki-moon is also criticizing the current Israeli policy in no uncertain terms:

“The long-running closure imposed on the Gaza Strip is counter-productive, unsustainable and wrong.  It punishes innocent civilians.  It must be lifted by the Israeli authorities immediately.”

While these statements are no doubt important, the United States is the only country that can really impact the behavior of the Israeli government, and as Stephen Zunes notes, the Obama administration at first seemed to be siding with Israel:

…the White House issued a statement that simply “expressed deep regret at the loss of life in today’s incident, and concern for the wounded.” The White House did not criticize Israel’s actions. Meanwhile, the State Department appeared to condemn the multinational effort to deliver medical supplies and other humanitarian aid, saying that “”expanding the flow of goods to the people of Gaza…must be done in a spirit of cooperation, not confrontation.”

An article in yesterday’s New York Times, however, said that the Obama administration does consider the current policy “untenable” and is planning on pushing Israel to change course:

“There is no question that we need a new approach to Gaza,” said one official, who spoke on the condition of anonymity because the policy shift is still in the early stages. He was reflecting a broadly held view in the upper reaches of the administration.

“Gaza has become the symbol in the Arab world of the Israeli treatment of Palestinians, and we have to change that,” the senior American official said. “We need to remove the impulse for the flotillas. The Israelis also realize this is not sustainable.”

Similarly, Secretary of State Hillary Clinton recently told reporters that the administration would be pressuring Israel to ease the blockade, which she called “unsustainable and unacceptable.”

While these are positive signs, words alone will not be enough. Israeli Prime Minister Benjamin Netanyahu is adamantly refusing to change course. Given this recalcitrance, the only way the US can push Israel on this issue is through the power of the purse.

If Congress doesn’t threaten to cut off the $3.2 billion in military aid to Israel that it is in the process of appropriating for next year, it’s hard to see any concrete change taking place as a result of this tragedy. And that still seems very unlikely.

The only way Congress would consider taking such a bold move is if the public does not let this issue die and there are sustained protest on a much larger scale than we have seen thus far. If you’re looking for a place to start, check out this list of actions.

Forest Service seeks to silence Smokey the Bear over fracking

Americans must go on the offensive or risk losing ground