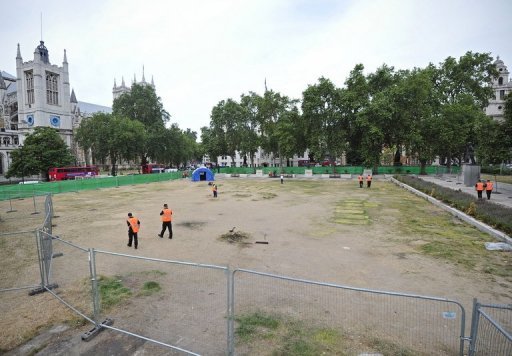 At 1am this morning, Democracy Village – the antiwar protest camp on Parliament Square in London that began on May 1 – was finally brought to an end. According to witnesses, it took about 60 bailiffs, with the assistance of police, to remove the remaining protesters after a few tied themselves to scaffolding.

The activists involved, however, do not appear discouraged. According to the AFP:

“People from ‘Democracy Village’ are going to carry on with this protest. We’re not going away,” said Pete Phoenix, a 36-year-old protester with blond dreadlocks and sunglasses.

“Lots of areas around the city are going to be taken over in the next few days and weeks.

“Our spirit is stronger after this eviction,” he told AFP, saying the camp had “raised awareness around the world” about Britain’s involvement in the wars in Iraq and Afghanistan.

The BBC is reporting that some are even planning on returning to their makeshift camp on Parliament Square once the fences that have been erected are removed.

While Democracy Village was started by antiwar protesters, they were over time joined by an eclectic  mix of climate change activists, pro-democracy campaigners, anarchists and the homeless.

According to Maria Gallastegui, who has run a vigil for Gaza in the square for four years, in its 11 weeks the camp changed from being “from 100% activist to 30% activist and 70% homeless.” This led to many activists focusing more of their energy on helping those in need than direct action.

The eviction order will not affect Brian Haw, the most well-known protester at Parliament Square, who has camped out there since 2001 to protest Britain’s involvement in the wars in Iraq and Afghanistan. Apparently, Haw was never a fan of Democracy Village, calling the protesters “deliberately unreasonable, even depraved and outrageous.”

While it was probably not a wise move strategically to include activists pushing so many different issues in the camp, or to allow alcohol and drugs on the premises, they were no doubt fighting the good fight.