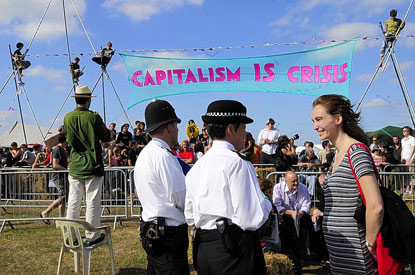 The Climate Camp currently set up on the grounds of the Royal Bank of Scotland corporate headquarters in Edinburgh has received some strong criticism from The Guardian in a couple recent pieces. On Tuesday, environment page editor James Randerson documented how Climate Camp organizers let Twitter get the best of them during a day of mass action against RBS and its funding of the fossil fuel industry.

Climate Camp had its own Twitter feed of course, but anyone browsing through the #climatecamp hashtag would probably not have got the impression of the day’s events that the spinsters at Climate Camp wanted. Supportive texts were swamped by tweeters ridiculing the activists or even pretending to be them.

It is surprising that an organisation that puts so much emphasis on the art of manipulating the media (according to the Climate Camp media pack journalists are “weak and cowardly” and “astoundingly unimaginative”) did not think harder about how to use a medium that cuts out the peaky middlemen altogether.

While Climate Camp should have been a little more savvy about maintaining its Twitter feed, it’s not exactly a big deal that some people made fun of them on a social networking site. Far more important to Climate Camp’s success is the effectiveness of its on-the-ground actions. That’s why this next Guardian criticism, from photojournalist Marc Vallée, is more hard-hitting.

In Monday’s day of action at the Royal Bank of Scotland’s Edinburgh headquarters both sides had a plan: a media plan. The strategy from both the Climate Camp protesters and the police was to restrict and control the media with the aim of spinning their narrative.

I spent four days reporting on the environmental blockade of RBS with the aim of providing an independent record of the unfolding events. Instead, my colleague Jonathan Warren and I, spent a huge amount of our time trying – and at times failing – to gain access to both sides of the story.

I have reported on all but one of the Climate Camps over the last four years: Heathrow in 2007, Kingsnorth in 2008 and London 2009. Each time the media was not able to report freely.

Climate Camp has a history of restricting media access as well as handing out free media content to newspapers and media groups – PR worthy of any multinational bank or corporation.

A huge part of the Climate Camp strategy is about spreading its message and the “battle for the hearts and minds”. The Climate Camp neighbourhood media pack says: “one of the best chances we have of reaching people who haven’t yet heard what we’ve got to say yet is through the media”. I agree.

That is why the camp should open up and stop its attempts to control the media. These only serve to restrict free speech and risk backfiring by alienating journalists – the very people in the best position to help spread that message.

Based on the tone of these two Guardian writers, it’s clear there is serious tension between climate activists and the media. That is not a good thing for the former, especially when the latter is normally sympathetic to such causes.

With the police and RBS not offering much media assistance either, this is a great opportunity for Climate Camp organizers to give voice to their cause. A great example of activists taking advantage of this sort of situation came last year during the Vestas wind-turbine manufacturers sit-in on the Isle of Wight. While Vestas management refused to talk to the media, the workers conducted interviews with all the top papers and subsequently became media darlings.

Maybe it’s impossible for a bunch of rowdy, hippie-looking young people to ever become media darlings, but Climate Campers should try to be at least a little less hostile toward writers who are generally willing to help their cause.