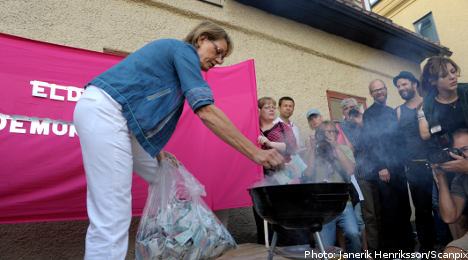 Last month, the Feminist Initiative (FI), a feminist party in Sweden, lit a barbecue and proceeded to publicly burned 100,000 kronor ($13,087), to protest the wage gap between men and women in the country.

“One hundred thousand kronor is the amount women lose each minute when we have the system we have now, where salaries are set according to gender,” she said.

“But Feminist Initiative is a political party. We are not a charity, we work to change reality.”

The move provoked criticism, but also generated significant media coverage, both nationally and internationally, leading some to declare it a success.

When there are so many people in need, however, is burning money an ethical tactic? My gut reaction to this story was critical. But how different is physically burning money from spending the same amount on a 30-second political ad on television or a half-page ad in a national daily newspaper?

Is burning money an effective or ethical tactic?