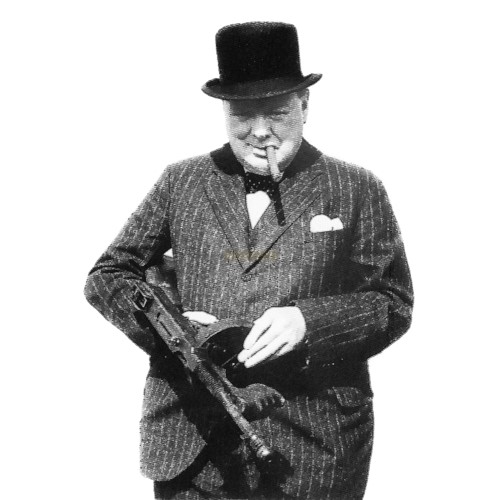 History tends to look kindly upon Winston Churchill, and for good reason—he wrote a lot of it and he was on the winning side of the greatest power struggle in the modern era. But alternative histories, such as Nicholson Baker’s Human Smoke, have shown Churchill as a warmonger, ultra-nationalist and antisemite of Hitlerian proportion. Almost every action he undertook either provoked, prolonged or intensified the war—such as rejecting plans for peace or the safety of German Jews, starving innocent people in Europe through a naval blockade, imprisoning England’s German population (which included Jews), and goading an attack on his own people.

Repeating these criticisms is not only an important step toward setting the record straight, but also making Churchill’s well-worn path to war less appealing. Metta Center for Nonviolence Education founder Michael Nagler recently expanded upon this point in an op-ed comparing General Petraeus’s stubborn refusal to pull troops out of Afghanistan to Churchill’s equally obstinate declaration that he would not “preside over the dissolution of the British Empire.”

What was Churchill’s mistake? I believe there were two of them, or perhaps more accurately, one big one showing up on two levels of reality. Churchill notoriously missed the source of Gandhi’s power and the depth of determination he had roused in the Indian people. At a dinner party in Cairo, the South African leader Jan Smuts, reflecting on his own defeat at Gandhi’s hands, said the reason they had failed to stop him was that they had been unable to appeal to people’s religious feelings. Churchill, always obtuse on this point, is said to have snorted, “Nonsense; I have appointed many bishops,” and went on to preside over precisely what he denied would happen.

But there is a deeper lack underlying this one: ignorance of the fundamental fact of human nature, that violence is the wrong way to build democracy, win friends or stabilize anything worth keeping. Destructive means – and no one can deny that military means destroy people and property, indeed the planet itself – do not bring to pass constructive ends. That seems to be an underlying law of human dynamics that we ignore at our peril. General Petraeus and everyone who still dreams of a military resolution to the horrors that militant means have created in Afghanistan seem to simply miss this.

Nagler goes on to explain how the positive energy of nonviolence will have greater longterm positive effects on Afghanistan than war:

Over half the world now lives in a society that has seen huge changes – almost all of them positive in nature – emerge in the wake of a nonviolent uprising or movement of some kind; what Jonathan Schell calls “the unconquerable world,” the will of aroused people, is quite real.

That process has not happened yet in Afghanistan; but we must remember that the second greatest nonviolence advocate in Gandhi’s train, sometimes called “the Frontier Gandhi,” was Badshah Khan who raised an “army” of over 80,000 Pathans – the very people whom we are now fighting – pledged to complete nonviolence of behavior and played a great part in dislodging British control in what was then the North West Province of India. How would it work today? This much we know: the “wrong stuff” is not working, and the “right stuff” – nonviolence – is there to be developed. As it stands, however, those who call their use of violence a “job” are keeping themselves and all of us from carrying out the real job of every person alive: discovering how to live in peace by creative, nonviolent ways of dealing with one another and our difficulties. From Winston Churchill to four-star General Petraeus, we need to question and confront the overconfident leaders who seem to be oblivious to any other form of power than militarized empire.

If Churchill is rolling over in his grave at such wide-eyed optimism that can only be a good thing.

Overcoming the Churchill trap in Afghanistan