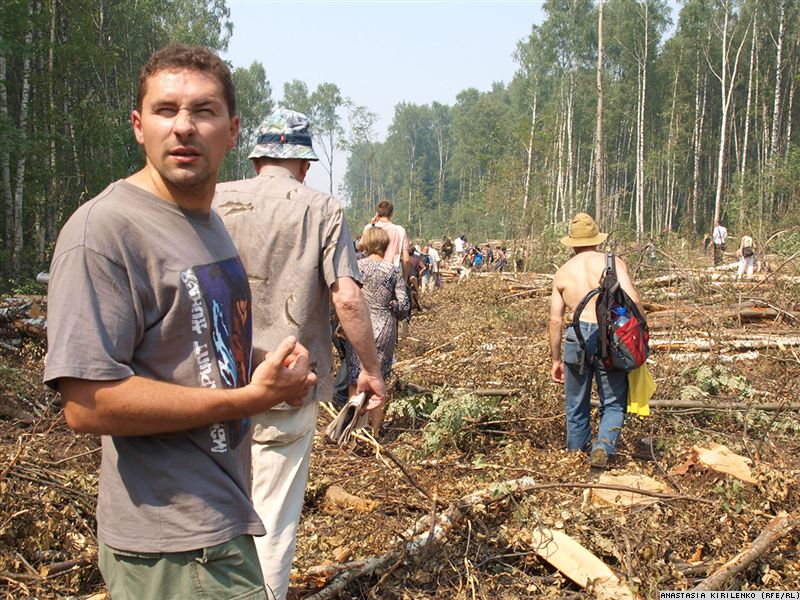 As Russia’s forests go up in flames, a group of activists and environmentalists is struggling to protect one of Moscow’s few remaining green belts and stands of old growth oaks. This time the threat isn’t wildfires but rather a 10-lane super highway that would link Moscow and St. Petersburg. The campaign to prevent the road from passing through the 2,500-acre Khimki forest, a long protected reserve just outside of Moscow, began in 2007. Since then journalists and editors investigating the story have been attacked (one nearly beaten to death), environmental activists have been arrested, and European investors—including the European Bank for Reconstruction and Development (EBRD) and the European Investment Bank (EIB)—have begun to question the viability of the project. Recently efforts to halt the construction of the highway and leveling of the forest have escalated.

In late July, Khimki’s administrative building was attacked by a group of anarchists and anti-fascists, while activists who had set up a camp in the forest were detained and arrested. Then, on Sunday, Moscow police and security forces broke up a rally and concert in defense of Khimki that attracted perhaps as many as 2,000 supporters.

It is difficult to hold rallies in Moscow. Obtaining a permit is a bit like playing the lottery; your chances are slim and subject to the whims of the city’s Mayor, Yuri Luzhkov, who, over the course of his 18-year rule has come to run the city like a fiefdom. He is particularly non-plussed by gay rights campaigners and has denied them the right to march in Moscow year after year. So getting 2,000 people out onto the streets in defense of a public forest is no small feat. Like Lake Baikal in the 1960s, Khimki has become the symbol of a rejuvenated Russian environmental movement, one that has largely relied on civil disobedience and non-violent protest to achieve its goals. 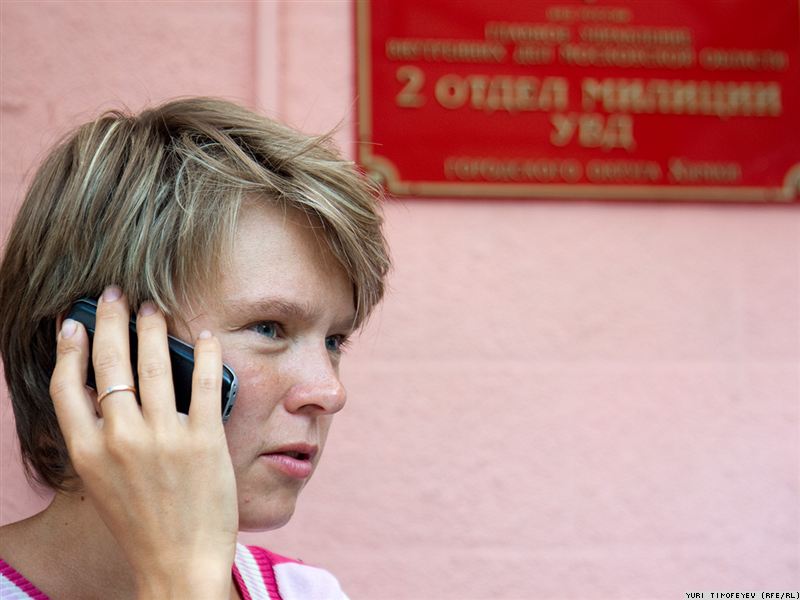 The face of the new movement is Yevgenia Chirikova, a 33-year-old mother of two with degrees in business and engineering. She and her husband moved to Khimki in 1998 for many of the same reasons that any young family would: It is quiet, clean, and close to a large public green space. (It is worth noting that Moscow is one of the most polluted, congested, dangerous, and expensive cities in the world.)

In 2007, when Chirikova and her husband noticed large swaths of trees marked with red x’s they were naturally concerned and did some digging. They soon found out that the forest had been sold to a Russian company, Avtodor, a spin-off of the Transport Ministry, and would be cleared to build a massive highway. The work had been sub-contracted to a French company, Vinci, and most of the financing was to come from international bodies.

The residents of Khimki were largely unaware of what was happening; the project had been kept completely under wraps. An engineer by trade, Chirikova thought it was odd that the administration had decided to build the road in this particular spot. Why build a highway that has to conform to the irregularities of a forest when there are simpler, more direct, and perhaps even less expensive routes?

“It was totally obvious that it was simply a backroom deal to begin [property] development in our oak forest,” Chirikova recently told Radio Free Europe. 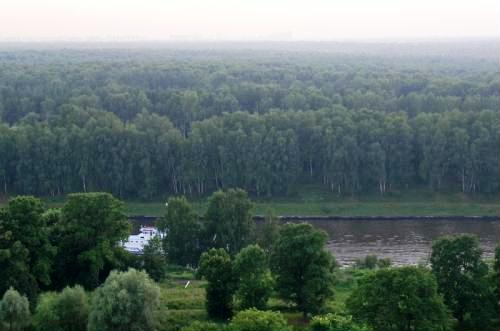 Not only that, but it violated Russian law. The Khimki forest was protected. For its defenders, this was the most promising line of attack. But as Chirikova and others began to make their case—going door to door alerting residents, filing lawsuits in Russia and abroad, and lobbying European banks to cut off funding for the project—Russian Prime Minister Vladimir Putin issued a decree that effectively did away with the forest’s protected status. The decree, issued last year, states that Khimki is now zoned “for transport and infrastructure,” a designation that, according to Forests.org, applies to 26 road construction projects on public conservation lands throughout the country.

If Putin’s move was designed to silence critics and speed things along it has hardly been successful. Over the last year, activists have become more vigilant and opposition to the highway has only grown. Activists have camped out in the forest in an attempt to delay construction. On August 3, about fifty protesters holding what the government deemed an unsanctioned protest there were detained. Two days later Chirikova herself was arrested at a Moscow press conference in front of dozens of reporters. City police said she had failed to respond to a summons for questioning about the attack on the Khimki administration building on July 28. “I honestly told them that I know nothing [of the July 28 attack] as I was at the logging site at the time,” Chirikova told the Moscow Times. 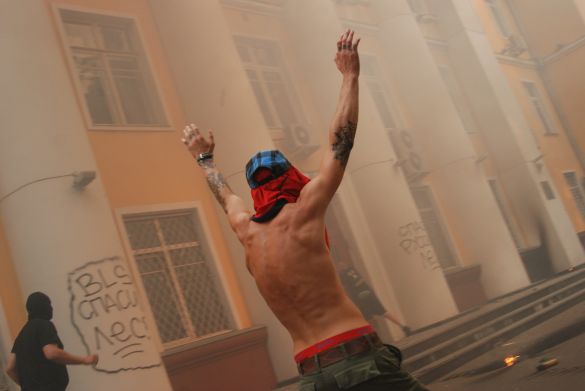 Chirikova and her colleagues have been highly critical of the evening attack on the administrative building, referring to its leaders as members of “extremist groups.” Numbers vary but the demonstration was led by at least 100 anti-fascists (some estimates are as high as 500) who threw smoke grenades at the building, breaking windows and damaging an art gallery. They covered the building with the slogan, “Save the Russian Forest.” No one was injured but Khimki officials said that the attacks caused “considerable damage.”

The immediate effect of the attacks, however, was the detention of nine environmental activists, including Chirikova, who had set up a protest camp in the forest. They were fined for allegedly making a fire and released the same day. Because authorities in Russia need little justification to crackdown on opposition activists, the conflation of the July 28 demonstration with the non-violent tactics of the forests defenders may have far reaching consequences.

Anton Belyakov, a member of the State Duma who has supported the non-violent protesters, told the liberal radio station Echo Moscow:

“I am truly disappointed that extremists and provocateurs are more and more mixing themselves up with the true ecologists and genuine defenders of the Khimki forest.”

Meanwhile, the high visibility of the protests has given European funders pause. The EBRD and EIB have both announced that they are reconsidering their plans to finance the project, which could ultimately derail the development. But perhaps most importantly, the forests defenders are being taken seriously and have reached a wider audience. They’re well organized, media savvy, and one step ahead of the often tone deaf Russian government. This doesn’t mean they’ll win but it does perhaps mark a shift in the ability of everyday citizens to influence government decisions.

Chirikova is emblematic of a new wave of civic activists in Russia — ordinary people motivated by everyday bread-and-butter concerns who are increasingly finding their voices as engaged — and sometimes enraged – citizens.

From automobile owners in Vladivostok taking to the streets to protest import tariffs to teachers and students in Ulyanovsk staging a hunger strike over school closures, the last several years have witnessed a whole new class of Russians becoming more socially and politically aware.

Whether a “whole new class” of politically minded Russians has come to the fore is debatable. But small groups often fighting single-issue campaigns are finding ways to organize themselves and, in some cases, have emerged victorious. This is all unfolding against the backdrop of an increasingly authoritarian state, one that has been weakened by the financial crisis and its inability to deal effectively with a crippling drought, heat wave, and forest fires that have consumed more than 2 million acres of woodland. 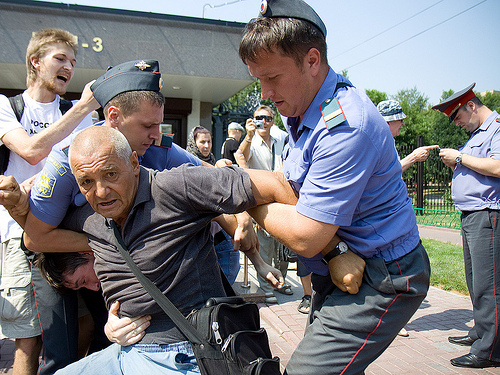 Civil disobedience in Russia isn’t a spectator sport. Those who choose to challenge the state often face severe and, in some cases, deadly reprisals. Russia remains one of the most dangerous countries in the world for journalists, trailing only Iraq and Algeria, according to the Committee to Protect Journalists. Some of its most prominent investigative reporters have been killed in broad daylight in the nation’s capital. Mikhail Beketov, a journalist and activist who covered the Khimki forest issue and was critical of the local administration, was left brain dead after being beaten by thugs. Human rights lawyers and activists continue to come under the gun in Russia. At the Sunday rally in Moscow, prominent human rights leader Lev Ponomaryov and two Solidarity opposition leaders were arrested.

Yet none of this has deterred Chirikova or her colleagues. Holding few illusions, the young activist recently acknowledged that the construction of the highway would likely begin very soon.

“The next step is probably that they will start building,” she told the Washington Post. “We are ready. It is going to be very loud.”