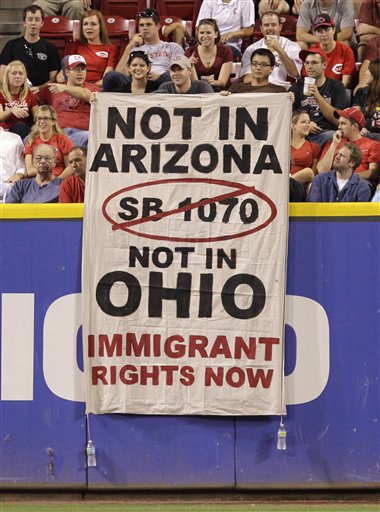 One, two, three strikes you’re out at the old ball game, as the song goes.

But it took just one strike for Dan Moore and Sarah Szekeresh to get booted from the Great American Ballpark in Cincinnati, Ohio, last Wednesday after unfurling a banner protesting SB1070, Arizona’s recent bill targeting immigration, over the center field wall during an Arizona Diamondbacks game against the Cincinnati Reds.

Moore and Szekeresh were then arrested for disorderly conduct and spent six hours in jail. The fourth-degree misdemeanor carries a penalty of up to $250 and 30 days in jail. The pair pled not guilty and will have a bench trial on October 4.

In an interview with Waging Nonviolence, Moore said that talking about his arrest misses the point. “Immigrant families get arrested every day for bogus reasons, and these criminal records cause significant damage to their lives,” he tells WNV. “All this talk about being arrested – when I can go home and continue my job and my life – just dramatizes the true catastrophe going on in immigrant communities around deportation. Families get ripped apart. It’s hard to pity myself.”

Szekeresh felt similarly, telling the Cincinnati Enquirer, “It’s not about me.”

The risk of arrest is a real concern for undocumented people. “It highlights the role that allies can play in the struggle for immigration reform,” said Moore. “Immigrants have owned much of it, but when it comes to tactics that would expose undocumented people to unnecessary risks and even deportation, allies must also step up. We must work to responsibly escalate the struggle.”

Protests have followed the Arizona Diamondbacks across the country. “We don’t have ambassadors between states,” explained Moore. “Baseball games are as close as we get, and these actions communicate to people in Arizona that anti-immigrant hate will not be welcome here. It won’t be normalized.” That message, disseminated by the AP, reappeared in local Arizona newspapers.

Moore and Szekeresh planned their action with the help of both immigrant communities and activists in other cities, including those promoting MoveTheGame.org, a website petitioning Major League Baseball to change the venue of the July 2011 All-Star Game, currently scheduled for Phoenix.

Movements should listen to Bernie Sanders — focus on mass action, not candidates

Student debt strikers grow in number and in power