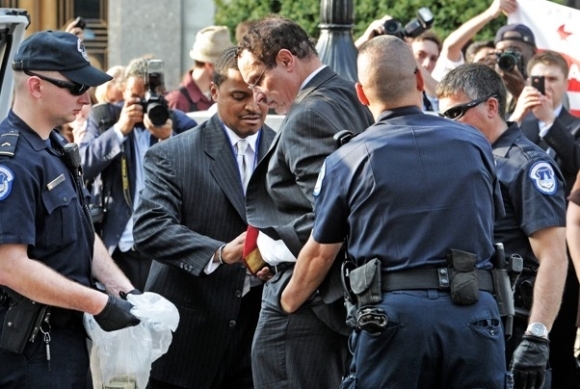 Mayor Vincent Gray of Washington, D.C. and several members of the D.C. City Council were arrested Monday night as they blocked traffic on Constitution Avenue next to the Dirksen Senate Office Building. The officials had gathered along with over 200 city residents to protest restrictions on D.C. funding included in last Friday’s Congressional budget deal.

They sat for half an hour, chanting, “No justice, no peace,” before being arrested by U.S. Capitol Police. Forty-one people were arrested and charged with unlawful assembly. The activist group DC Vote organized the protest.

The Congressional budget deal on Friday, which averted a government shutdown, prohibited D.C. from using its own locally raised funds to pay for abortions for low-income women. The budget deal also financed a school voucher program, controversial among D.C. leaders.

“I’m tired of being a pawn in a political game,” Mayor Gray said before being arrested, according to The Washington Post. “All we want is to be able to spend our own money.”

The Constitution denies D.C. the right of self-government by authorizing Congress “[t]o exercise exclusive Legislation in all Cases whatsoever, over such District.” D.C. has gained greater authority over its affairs since 1791, but—as this budget deal shows—not nearly enough.

All laws and budgets passed by the D.C. Council must be sent to Congress for approval. So that’s one problem: the Congressional veto over D.C.’s local democracy. The other problem: D.C has no voice in the Senate and its delegate to the House cannot vote. The reason: partisan silencing of the 86% of D.C. voters who cast ballots for Obama in 2008.

Residents of D.C., which at 600,000 is more populous than Wyoming, lack that basic democratic right: to have a voice in decisions that affect them. Some 235 years since the original tea partiers protested taxation without representation, the slogan still bites.