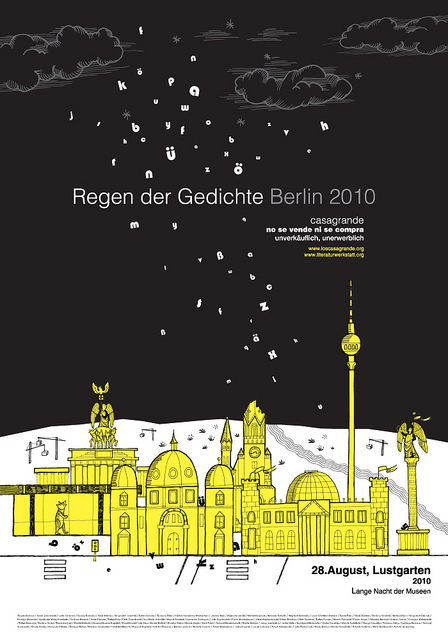 Chilean art collective Casagrande brought its “Poetry Rain” project to Berlin last weekend, dropping 100,000 poems over the city as a protest against war. Casagrande has done this several times since 2001, focussing on cities that have been bombed during actual warfare, such as Santiago de Chile, Dubrovnik, Guernica, and Warsaw. Unfortunately there doesn’t seem to be any video of the drop, just the perparation for it. But if it was anything like the one they did in Warsaw, it was no doubt a spectacle to behold.

According to The Guardian:

Organisers say that just as wartime bombings were intended to “break the morale” of the inhabitants of a city, so the poetry bombing “‘builds’ a new city by giving new meaning to events of her tragic past and therefore presenting the city in a whole new original way”.

The Berlin project, for which Casagrande worked with Literaturwerkstatt Berlin as part of the Long Night of Museums, took place in the city’s Lustgarten, where a crowd of thousands had gathered to hear readings and performances by Latin American artists.

Divestment helped to end apartheid in South Africa — can it work for fossil fuels?

Poetry rains down on Berlin