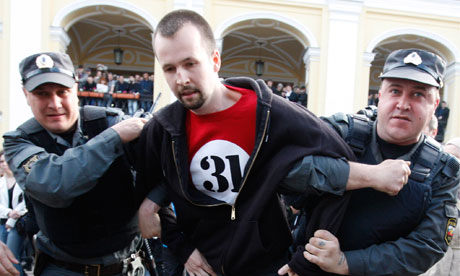 Western papers seem to take great pleasure in writing about protest movements in Russia. In fact, you’re far more likely to find a story about a small protest in Moscow or Siberia than you are to find news of a rally or insurrection in your own hometown. This is in part understandable: it’s difficult to stand up and make your voice heard in Putin’s Russia. When it does happen, it is newsworthy.

Take the successful campaign to stop the construction of a highway through an old growth oak forest just outside of Moscow. No one imagined that the administration would back down. After years of knocking on doors, handing out leaflets, filing lawsuits, and eventually setting up camp in the forest the environmental activists achieved their goal. It is a real possibility now that the highway will be rerouted to spare the Khimki forest. The campaign also managed to bring some 2,000 protesters onto the streets of Moscow for a concert and demonstration that was broken up by police and security forces. Several arrests were made.

Just days later, on August 31, a far smaller rally—estimates put the number at about 200 protesters—was quashed by an overwhelming display of force. The “Strategy 31” protesters have been staging rallies in Moscow’s Triumph Square for months, drawing attention to article 31 of the Russian constitution, which protects freedom of assembly. According to Agence France Press there were an astonishing 500 policemen at the latest rally and 70 protesters were detained. Moreover, several days before the scheduled protest the government announced that Triumph Square was to be converted into a massive underground parking garage. So they fenced it off. If you can’t stop the protesters from showing up you can just build a parking garage on top of the public square. At least that seems to be the strategy at the moment.

But is Russia’s opposition getting louder? And is their influence growing? Certainly, the case of Khimki was an effective campaign on several fronts. There hasn’t been a great deal of analysis as to why Medvedev suddenly backed down.

Boris Kagarlitsky, writing in the Moscow Times notes that, “a new factor in the equation is that people not previously affiliated with politics have joined the fray. The Khimki conflict does not fit into the usual paradigm of protests pitting the Kremlin authorities against the implacable opposition. In addition to Yevgenia Chirikova, leader of the Khimki forest preservation movement, music critic Artemy Troitsky, rock legend Yury Shevchuk and the country’s environmentalists have no direct connection to opposition groups. On the contrary, they tend to disassociate themselves from them.”

That seems to be another way of saying that the opposition is in fact growing. Or at least its base is and “ordinary” people like Chirikova as well as musicians and artists are more and more willing, for whatever reason, to speak out.

At bottom, though, it seems the Kremlin is losing its grip on bread and butter issues. Throughout Putin’s reign, his success has often been attributed to the fact that the economy has improved and stabilized; after the reckless pillaging of the Yeltsin years this was welcome relief. His popularity ratings soared and the Russian people were willing to put up with just about anything. But now there seem to be cracks in the walls of the Kremlin.

Witness what happened in Kaliningrad, where an unusually large protest earlier this year seems to have influenced the Kremlin’s decision to replace the exclave’s governor.

Once upon a time, governors were elected in Russia. Putin put an end to that in 2004, with little dissent or upheaval, and governors are now appointed by presidential decree, chosen from a list of candidates drawn up by the governing party.  But the people of Kaliningrad evidently weren’t impressed with their chosen leader, Georgy V. Boos. In January, 10,000 protesters took to the streets demanding that he be removed from power. In what appears to be a response to public pressure, and just plain common sense, Boos has not been offered a second term.

“On the one hand, this is a victory for the opposition thanks to the protests in January and December,” Konstantin Doroshok, the head of the Kaliningrad branch of the opposition group, Spravedlivost, told the New York Times. “On the other hand, it is important to understand that the people have not been given the most important thing: the real opportunity to independently elect governors.”

The political climate hasn’t changed—if anything it’s gotten worse—but it appears that opposition groups have been emboldened. After learning that their meeting place had been fenced off, the Strategy 31 protesters decided to simply relocate the demonstration: not only would people gather in Russian cities but they’d take to the streets elsewhere—in London, New York, Tel Aviv, Berlin, and Helsinki.

According to Bill Bowring writing in the Guardian:

“What is striking about the new protest movements is that they bring together household names of the older generation, like Alekseyeva and Lev Ponomaryov, who campaigned against Soviet repression, with the new generation of protesters and the much younger anarchists and anti-fascists, AntiFa. They match references to the constitution and to international instruments such as the European convention on human rights with direct action methods.”

Putin’s strategy, though, is the same as ever. In a recent interview with Kommersant, one of Russia’s leading dailies, he said that the issue is simple: protesters need a permit (he didn’t comment on the fact that obtaining one is nearly impossible if the authorities don’t approve of your message). Then, in typical Putin-speak—a kind of crass, juvenile messaging that he is famous for—he said, “If they go out without permission, they’ll take a cudgel to the head. That’s all there is to it.”