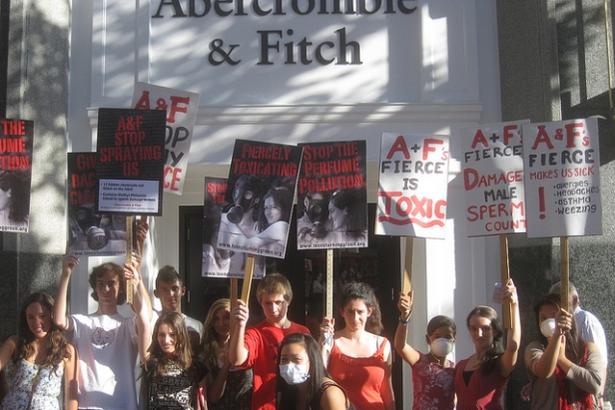 About a dozen teen protesters briefly shut down an Abercrombie & Fitch store in San Francisco on Tuesday afternoon as part of a day of national protest against the company’s continued practice of perfuming the air of their stores with unregulated toxics. Spearheaded by the advocacy group Teens Turning Green, the protesters entered the store marching around chanting, “Hey, hey, ho, ho, these toxic fumes have got to go.”

According to the Bay Citizen, the perfume in question, Fierce, “contains 11 chemicals not listed on the label because they are considered trade secrets, including eight that can trigger allergic reactions, such as headaches, wheezing and asthma.” It also contains diethyl phthalate, a synthetic solvent that has been linked to “DNA damage in human sperm, changes to male fetuses’ genitals in utero and alternations in baby boys’ sex hormones when exposed via their mothers’ breast milk.”

After police arrived and shut down the store, ejecting protesters and customers alike, the teens regathered outfront with their signs. As the Bay Citizen reported:

The girls chanted: “Why is it toxic?” To which the boys would heartily respond: “Because it kills my sperm!”

A&F has remained rather stand-offish about the whole incident, posting a defense of Fierce on its Facebook page without really acknowledging the protest.

The reaction on Facebook to the statement was split between those continuing to decry the scent and those defending it. “What happened to the customer’s always right?” posted one Kathleen Suits. “You’re just going to ignore this protest about the air pollution in your store? Then we’ll ignore your store and its affiliates!” Happy profits!!”

While unclear where the campaign will go from here, it’s encouraging that teens have been able to take things this far–defying the apathetic youth stereotype.

On Indigenous Peoples’ Day, Americans must recognize the ugly history of how the Nazis were inspired by the long and brutal U.S. campaign against Native Americans.